8:52 PM ETAssociated Press HAMPTON, Ga. — William Byron had a freight train in his rearview mirror. He was a sitting duck, it seemed. Fortunately for him, all those challengers started jostling against each other rather than working together to take down the leader.While Byron cruised to the checkered flag for the third victory of… 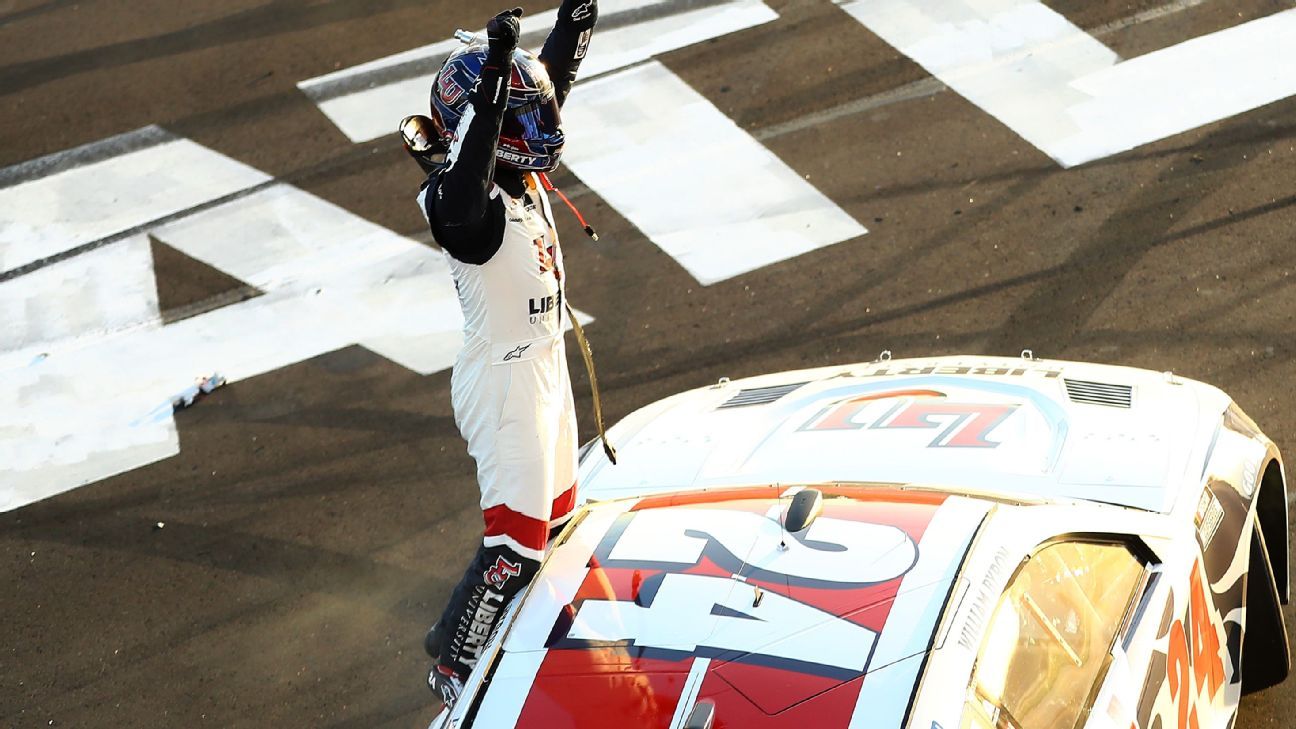 8:52 PM ETAssociated Press HAMPTON, Ga. — William Byron had a freight train in his rearview mirror. He was a sitting duck, it seemed. Fortunately for him, all those challengers started jostling against each other rather than working together to take down the leader.While Byron cruised to the checkered flag for the third victory of his NASCAR Cup career, one last crash unfolded behind him Sunday in an appropriate finish to a chaotic, thrilling race at remodeled Atlanta Motor Speedway.”Pretty wild,” the 24-year-old Byron said. “I’m out of breath. It was crazy.”The reconfigured track — with new pavement and steeper banking — lived up to predictions of frenzied pack racing at blistering speeds approaching those seen at Talladega and Daytona.It was like a short-track race at a superspeedway.There were 46 lead changes among an Atlanta-record 20 drivers, a traffic jam of tightly bunched cars that never got too far away from each other over a more than four-hour race, nine wrecks that took out several top contenders, and a bunch of smashed-up race cars to lug home.”It’s difficult, it’s stressful, it’s a different type of racing,” said Rudy Fugle, the winner’s crew chief.Bryon was leading off the final restart with 13 laps to go. Bubba Wallace briefly grabbed the top spot, only to have the No. 24 Rick Hendrick Motorsports Chevrolet pass him right back.Going for his second career victory, Wallace still seemed to be in the most enviable position, especially if he could get a helpful push for a slingshot on the final lap. But everyone behind Byron started dueling for position, all of them wanting to put themselves in position to make the winning move.That worked out perfectly for Byron, who pulled away to win by 0.145 seconds over Ross Chastain while the final wreck of the day sent four cars — including Wallace — spinning across the line.”It’s tough to be the leader,” Fugle said. “We just had a lot of things go right for us.”Wallace finished 13th. The remainder of the top five was Kurt Busch, Daniel Suarez and Corey LaJoie in his best career showing.In one last twist, Christopher Bell actually crossed the line second, but NASCAR penalized him for dipping below the double white line on the backstretch of the last lap to get past Chastain. Bell was dropped to 23rd.Chastain made quite a comeback after blowing a tire early in the race while leading. Ricky Stenhouse Jr. also blew a tire while running up front. Reigning series champion Kyle Larson, the front of his No. 5 Chevrolet patched with tape, had just surrendered the top spot when Denny Hamlin bumped him from behind, looking to give him a helpful push — only to send him into a spin that knocked them both out of the race.”Everyone is kind of hanging on for dear life,” Ryan Blaney said during a caution period.That summed up things perfectly.BASH BROTHERSOn the restart after Chastain’s early crash, another wreck took out both Dillon brothers.Kyle Busch gave Austin Dillon a slight bump from behind entering the quad-oval, sending Dillon into the wall. Ty Dillon and Chase Briscoe spun behind them, leaving the younger Dillon with major damage as well.The brothers were forced to retire, leaving Austin with a 35th-place finish and Ty in 36th.”I was in the gas wide open and the 18 (Busch) pushed us and got me loose,” Austin Dillon said. “I don’t want to say any worse. My feelings are hurt. That’s the second week in a row I’ve been taken out.”At Phoenix, Suárez made contact with Dillon on the final lap and sent the No. 3 into the wall, costing him a top-10 finish.SHORT DAYXfinity Series star Noah Gragson, making his debut in a Cup race, was the first guy out after losing control coming through Turn 1 and smashing into the outside wall.”Sorry, guys,” Gragson said over the radio before climbing out of his battered Kaulig Racing Chevrolet.A six-time winner in the second-tier Xfinity series, Gragson attempted to make the field at the season-opening Daytona 500. A crash in one of the qualifying races kept the Las Vegas-born driver from taking the track on race day.That wasn’t an issue in Atlanta, but wrecking on the 24th lap made it a short day for the 23-year-old Gragson.ODDS AND ENDSByron picked up the Stage 1 win under yellow. Blaney did the same in Stage 2. … Byron was the fifth different winner in five races this season. Three of Hendrick’s four drivers were among those winners, with Byron joined by Larson and Alex Bowman. … Bell struck his jack man in the right leg during a pit stop. The crewman was able to complete the change before being taken to the infield care center for treatment. His condition was not immediately available, and another crewman stepped in for Bell’s remaining stops. … Brad Keselowski and Harrison Burton had to start from the back of the field. Keselowski was penalized for changes to his car after inspection, while Burton’s machine failed inspection. … There were only 37 entries — three shy of a full field. … After struggling with attendance for years, a promising crowd turned out in Atlanta on a sunny day with temperatures climbing near 70 degrees. The infield was packed, while the massive grandstands were dotted with a smattering of empty seats. … NASCAR will return to Atlanta on July 11.UP NEXTThe Cup series heads to Circuit of the Americas in Austin, Texas, for the first of six road races this season. Chase Elliott won the inaugural COTA race a year ago.