Daniel Hemric and Noah Gragson fought on pit road after Saturday’s Xfinity race at Atlanta Motor Speedway and had to be separated. Hemric approached Gragson, who was doing a post-race interview, and shoved Gragson. Gragson broke free of Hemric’s hold and swung at Hemric. Hemric retaliated. As a member of Gragson’s crew attempted to pull… 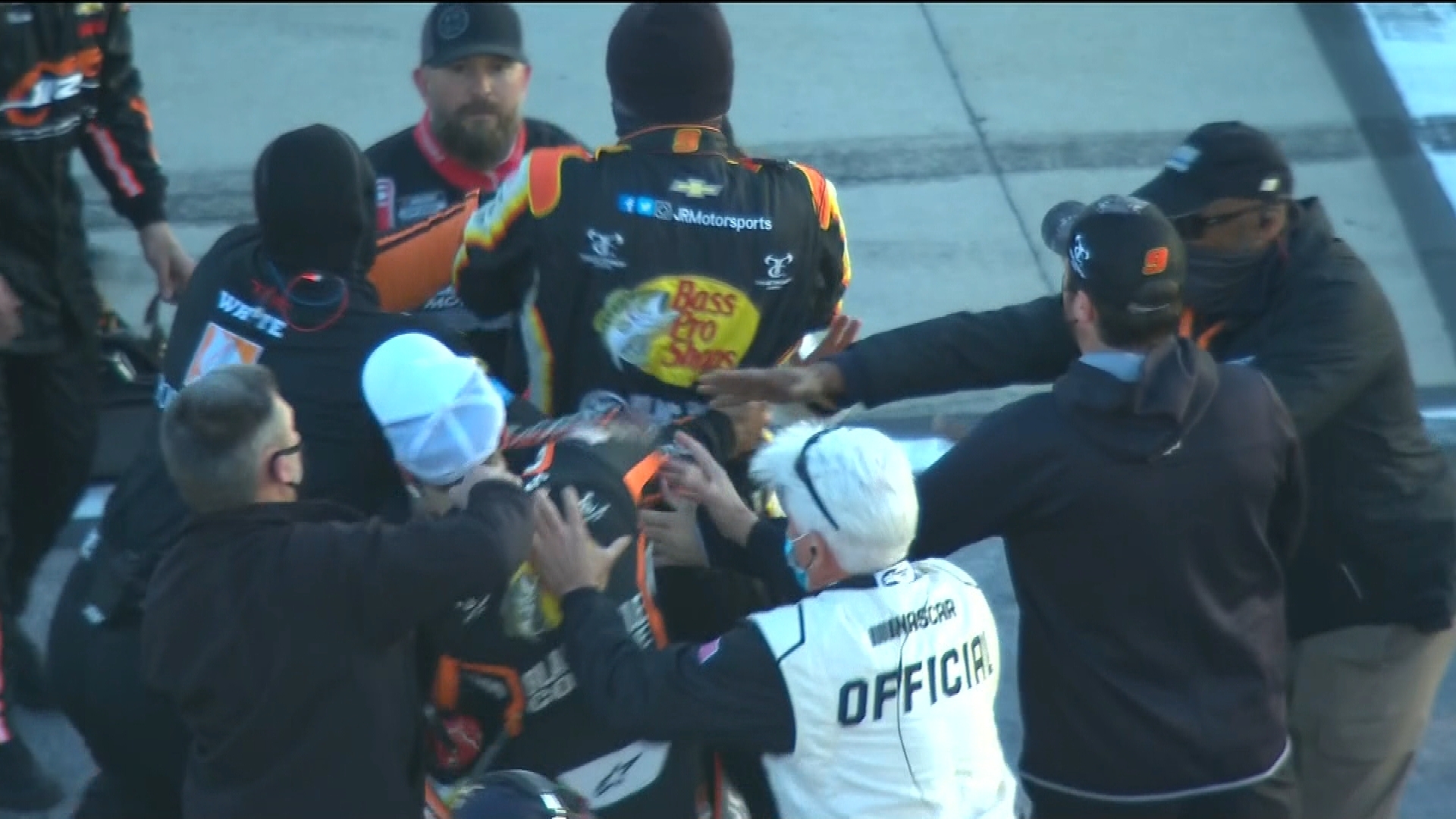 Daniel Hemric and Noah Gragson fought on pit road after Saturday’s Xfinity race at Atlanta Motor Speedway and had to be separated.
Hemric approached Gragson, who was doing a post-race interview, and shoved Gragson. Gragson broke free of Hemric’s hold and swung at Hemric. Hemric retaliated. As a member of Gragson’s crew attempted to pull Hemric away, Gragson struck Hemric. NASCAR officials restrained Gragson.
Hemric was upset for an incident during the race when Gragson backed up into Hemric’s car on pit road during a stop.
Hemric told Performance Racing Network: “Pretty simple, man. He had no idea what was going on out on the racetrack. We come down the pit road. The guy pitted behind us, went to accelerate out as I was pulling into my box. It made me had to steer around the guy and go into (Gragson’s) box. I backed up. Yes, it messed up both of our pit stops. I backed up. He decided to put it in reverse and cram into the right front fender and put a hole our Poppy Bank Toyota Supra nose. We had to pit again and fix it.
“That was completely deliberate. It’s absolutely ridiculous. Where I come from, you get your eye dotted when you do stuff like that.”
Hemric also told PRN: “Oh yeah, (Gragson) crammed it into reverse and backed up. Punch a hole in the nose of our car, and I got one punch in his eye so we’re even.”
Asked about the fight with Hemric, Gragson told FS1: “I don’t know why he’s mad. We were behind him coming on to pit road … He was in our pit box, and I had to come around him and not really sure why he was there. I had to back up and get there.”
NASCAR stated that Gragson was called to the hauler after the race. NASCAR stated it will review the incident and if any penalties are issued they would be addressed later in the week.
Justin Allgaier won the race. Gragson finished fourth. Hemric placed ninth.

18 was in our pit box when I was turning into our pit stall. He backed up into his. I was out of position in the box and had to back up to get into my box. Unintentional backing into him. If they’d show the full replay, you’d see I didn’t just back into him for no reason.
— Noah Gragson (@NoahGragson) March 21, 2021

Here’s the full video. Penalty if right side tires are out of the box. Final pit stop. Judge for yourself. pic.twitter.com/2LCQEiUDQ7
— Noah Gragson (@NoahGragson) March 21, 2021

The middle finger you gave me out the window was a pretty clear indication to me that you knew exactly what your intent was. Thanks for posting the facts @NoahGragson 👏🏻👏🏻 https://t.co/xIXq5oC9ZH
— Daniel Hemric (@DanielHemric) March 21, 2021

Last year, Gragson punched Harrison Burton after Burton repeatedly shoved him in the garage as they discussed their contact during last July’s Xfinity race at Kentucky Speedway.