High Rollin’ on the Hill in Las Vegas 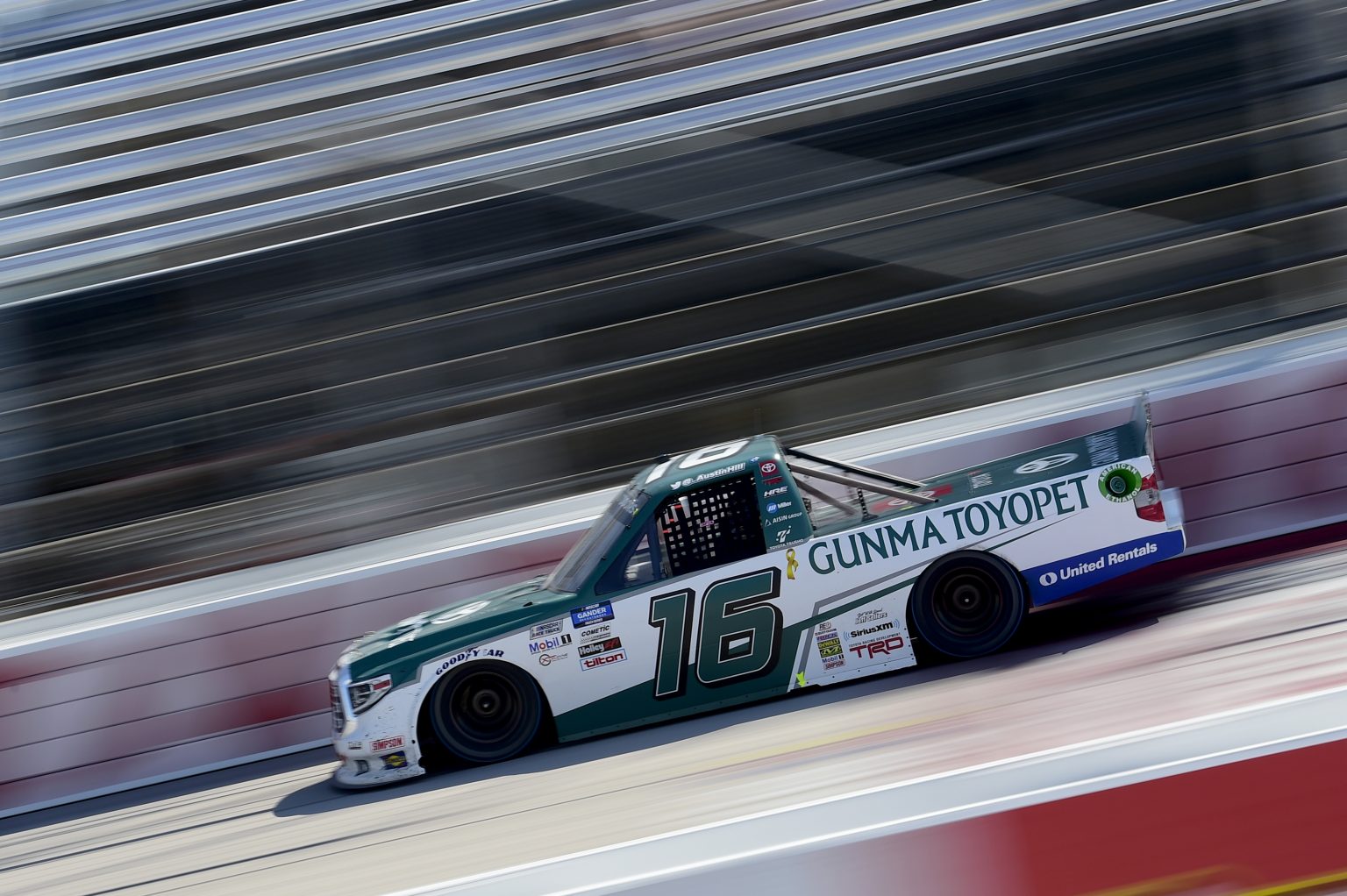 Nascar rolls into Vegas this week for the second playoff race of the Championship where 2 of the 8 remaining drivers will be eliminated. Earlier this year it was the Kyle Busch show with him leading majority of the laps and taking home the checkered flag. That will not be the case this time since Kyle is not in the list of drivers for the World of Westgate 200.

I have hit a decent amount of lobby wins this year in the trucks and I have a great feeling heading into this weeks race. I was out at Las Vegas earlier this year and was able to watch qualifying for the trucks when no fans were allowed in the track so I am running heavily off those notes as well as those practice speeds. Most of the notes correlated to the results of the race so we hope for the same results.

Brett Moffit has been on a roll lately but still cannot capture that first win of the year. Bristol could have easily became the first for him until the truck went away late in the going and Sam Mayer just drove off into the distance. This year at tracks similar to Vegas (Kansas/Homestead) and Vegas race 1 earlier this year, Moffit has only finished top 5 once. His other 3 finishes have been 2oth or worse. Now, with how fast we know GMS can be on any given weekend and the fact that its Moffit I will have about 30% Moffit in hopes that this will be the week or at least he can lead a decent amount of laps and finish top 10.

Austin Hill is a core play this week. If you watch any truck racing you know that Hill and his team are a threat to win any mile and a half track. This year he has a win, one top 5 and two top 10 at tracks similar to Vegas. Earlier this year at Vegas, I was at the track and was able to watch a bit of the practice (no fans were allowed into the track, I had garage passes). Hill made my notes as a truck that looked great on the long runs and was great on the practice sheets. Late in the race he was a lead contender if Kyle Busch was not in the field. I’m usually over the Hill but this week I am on it!

The Creed has been one of my favorite plays this year. Always seems to be under 10% owned and usually is at a great value. This week he is pricey and I am hoping that keeps people off taking the Creed shares. He was one of the few trucks that could run with ky Busch, actually ran side by side with him for 10-15 laps but ran the tires off of it and ended up sliding in the last couple laps. I will be about 20% on creed because I know he can do it. He does have 2 tops 10 finishes at tracks similar and has a great upside.

There is a kid this year that has stormed onto the truck circuit and made his presence known….Zane MF Smith. Listen, this kid has raced before and has done decent but nobody expected for him to come out and lead laps and win races. He has done just that. This year on tracks similar Zane has 3 top 10 finishes including 1 here earlier this year where he was one of the fastest trucks at the end of the race. Don’t be like Chaff_Stik and have him in 90% of your lineups but he is worth a 15-20% amount of the shares for fastest lap/laps lead potential alone.

Core pick #2 and low ownership target with huge upside is Christian Eckes. I’m not the biggest fan of him because he is great at plowing down the fence on a regular basis but earlier this year here he ran the first stage about 1 second off Ky. Busch and had an excellent run in practice with the fastest lap and best lap average in practice. No Kyle in the field and KBM equipment under him is enough reason to take him. I expect him to be leading after the competition caution if all goes according to plan. Just need him to keep it out of the wall.

Grant Enfinger has been real good at giving me the finger all year. Take that how you want it because I mean it in every way imaginable. I pick him because he looks good on the spreadsheet and he wrecks or forgets how to drive or runs out of talent. I don’t take him because he looks terrible and he wins the race so do what you want here. I think he has a great chance of falling off but then again this runs like a restrictor plate track and he is the best in the field at those type of tracks.

Johnny Sad Sauter has been the hardest driver to hit all year. Refer to my article last week for the full rundown here of fuckery that he has put us thru. Just know that he can win or he can finish last. Chances are he finishes last this year. Was fast here earlier this year, finished 2nd. Best finish of the year and don’t know that he can do it again but I have enough to be covered.

That brings us to the ringer of the week, Dylan Lupton. Yes, Dylan Lupton making his first start of the year for DGR-Crosley racing. I went back to the archives and found that in the 2 years prior to 2020 Lupton has 1 top 5 and 1 top 10 and tracks similar to Las Vegas. That’s good enough for me to take a few shares with him starting 34th. I wouldn’t go to wild here because that truck could fail to finish and he could be rusty.

Todd Gilliland – Love him at shorter (driver-type) tracks but does have top 10 finishes at tracks like Vegas. Could be a play. I wont have much this week.
Ben Rhodes – Take it how you want but he was in the winning lineup here earlier this year. He started 18th which helped. I have 2 shares like I do every week to be covered but I will not be on him anymore than that. He will have to get lucky to win like he did earlier this year. That’s the only way he pays for himself.

Matty C! I’m on him and you should be too. Dude is solid at tracks similar to Vegas and earlier this year he drove from dead last to 10th by the competition caution. He could put the truck wherever he needed to. Was on my notes page and said he loved the balance of his truck. Just didn’t have the overall speed to keep up with ky Busch. I think he has found that since then and at his price you fit him in where you can or make room for Matty C.

Chandler Smith – KBM equipment worth a couple looks if you get there. Has not been spectacular on tracks similar and is starting very close to the front for my liking.

Derek Kraus – Ive made some dollhairs off Kraus this year and it seems like when he starts in double digits he can be a threat to end up in the winning lineup. Therefore, I take him. However, I do not see this as a great track for him to out perform on so don’t go there to much.

Ryan Truex – He has some upside potential to get the points on position advance to pay off but id rather skip down a bit.

Conor Daly – Indy car driver trying his first start in any form of Nascar racing. I have 3 shares maybe and that’s about as much as anyone should have with the amount of unknowns here. Id rather go Travis Pastrana over Conor Daly

Tanner Gray – He was in the winning lineup earlier this year with a top 10 race run. He actually drove up into 2nd for a bit and was running better at the end than he ran all day so I like his chances here and at this value.

Travis Pastrana – Geez the circus act is back. Ok lets be realistic, dude is insane and deserves all the credit where its due but cmon man stay out of NASCAR. This guy showed up earlier this year and was in 2 cautions in the race and still managed to finish top 25 and fuck up all my great lineups. I hate him in the sports for gambling purposes because its such a high risk. That being said, Id love to be him hahah.

Core play 3#: Spencer Damn Davis – Here’s the deal with the insane core play of mine….its insane. But I have reason backing my idiotic logic. Earlier this year at Vegas Spencer David drove from beyond 25th up to 11th before the first caution. DROVE! Like passed everyone on his way there. Had a penalty on pit road, did it again. Had another penalty and did the same thing. He passed more trucks than any other guy earlier this year. Id like to think he will be in the same truck since that team only has a couple so I’m all in on a guy that’s $7,200 and is starting 32nd. He also has 3 out of 3 top-15 finishes this year on similar tracks including Vegas earlier this year. I would like to think he will be on the lower owned side of 15% due to the ringers in the field that will take ownership away.

Tyler Hill – Cant do it, wont do it

Chase Purdy – At first I could not get behind this but after looking at previous year results and considering his equipment and value I decided to take about 10% Purdy just to get some decent upper half builds. Don’t go wild.

Dawson Cram – Tread lightly here. I have a few just because he could drive up to 25th or maybe a little better with wrecks and he opens up some door for the top builds.

Spencer Boyd – Same as Cram except he is starting 25th which means we would need close to a 15th place finish for him to get us there. Its possible but I would be gentle with the stabs here.

I cannot recommend picking any of the remaining few drivers.