Who will be the 2021 NASCAR Cup Series champion?

NASCAR racing at L.A. Coliseum in 2022 The NASCAR season-opening Clash race will be held on a temporary track built in the L.A. Coliseum in 2022. The exhibition race features around 20 of the top drivers.And then there were four. Hamlin, Truex, Elliott and Larson will be competing for the NASCAR championship at Phoenix. (Sean… 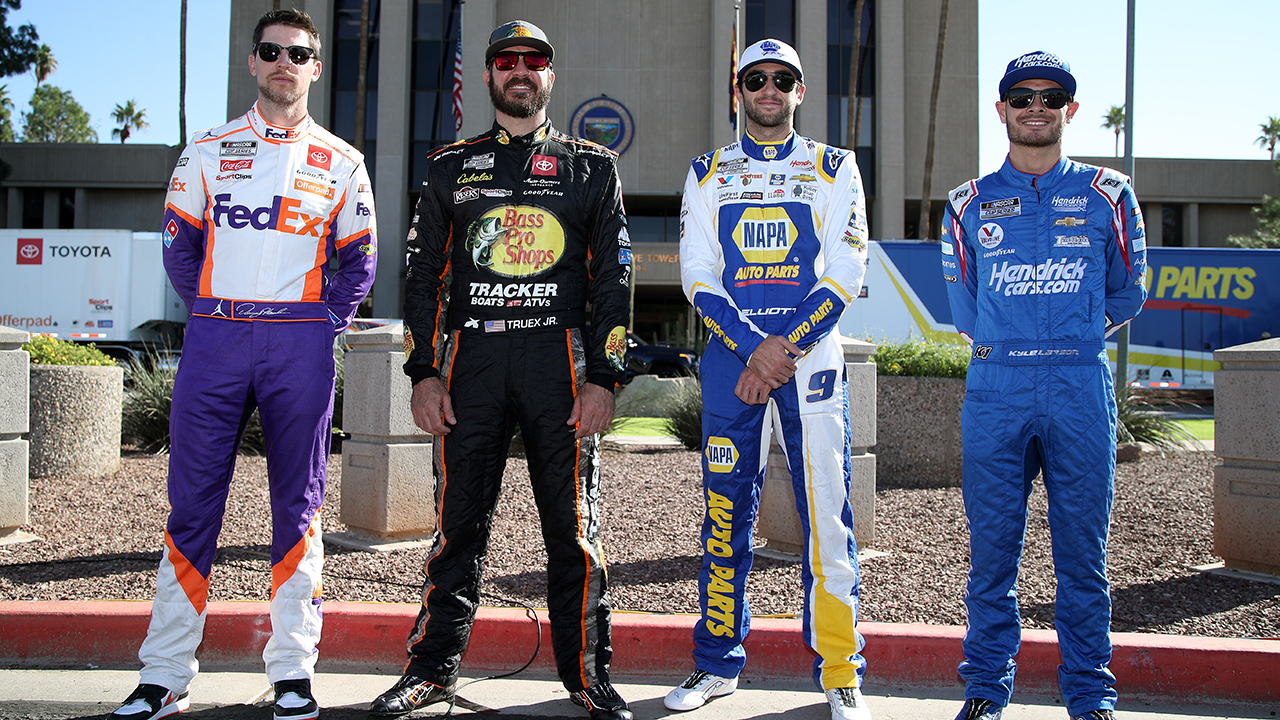 NASCAR racing at L.A. Coliseum in 2022 The NASCAR season-opening Clash race will be held on a temporary track built in the L.A. Coliseum in 2022. The exhibition race features around 20 of the top drivers.And then there were four.
Hamlin, Truex, Elliott and Larson will be competing for the NASCAR championship at Phoenix.
(Sean Gardner/Sean Gardner)The NASCAR Cup Series finale kicks off at 3:00 pm ET on Sunday, Nov. 7, at Phoenix Raceway and a new champion will be crowned when the checkered flag flies.Hendrick Motorsports drivers Chase Elliott and Kyle Larson will be facing off against Joe Gibbs Racing drivers Martin Truex. Jr. and Denny Hamlin for the title, but who is the favorite to win?Here’s what the oddsmakers at Fox Bet think:Martin Truex Jr. +600
Truex won the title in 2017.
(Meg Oliphant/Getty Images)2017 champion Truex won the March race at Phoenix and says if his car’s as good as it was then, he’ll need to make room on the trophy shelf.”That the was best car I ever had here my whole career,” Truex said. “The car felt really good and did a lot of good things. If we can make that happen again, and hopefully have even more speed, we’re going to be tough to handle.”Denny Hamlin +550
Hamlin is looking for is first Cup Series championship.
(Meg Oliphant/Getty Images)Hamlin is coming into Phoenix hot, so to speak, after an on-track confrontation with Martinsville winner Alex Bowman. Hamlin was battling Bowman for the lead when Bowman’s car lost grip and ran into Hamlin’s car, spinning him out of contention.Hamlin has two career wins at Phoenix and finished fourth as a championship contender last year. He’ll be racing to claim the first Cup Series championship in his 17-season career.Chase Elliott +475
Defending champion Elliott won the Phoenix race last year.
(Meg Oliphant/Getty Images)Elliott knows how to win at Phoenix, where he won his first championship last year. He’s in it to win it,” team owner Rick Hendrick said of Elliott. “He’s got a chance and a good shot at being a back-to-back champion.”NASCAR’s most popular driver also has the best car of this season in Hendrick’s Chevrolet Camaro, but so does the season’s best driver.Kyle Larson +300
Kyle Larson led the Cup Series with nine wins in 2021.
(Meg Oliphant/Getty Images)With nine wins and a regular season title under his belt, Larson has put in one of the most dominant performances in NASCAR history a year after he was suspended from the series for using a racial slur during a livestreamed online race.CLICK HERE TO GET THE FOX NEWS APPThe 29-year-old has never won at Phoenix or a Cup Series championship, but the consensus is that they’re both his to lose this year.The Associated Press contributed to this report
Read More