Who can break through Round of 8 to Cup title race?

Kyle Busch’s elimination guarantees that there will be at least one driver in next month’s Cup championship race at Phoenix who wasn’t in last year’s title event. But who will it be? Chase Elliott, Alex Bowman and Kurt Busch seek their first championship race appearance. Brad Keselowski looks to make the title race for a… 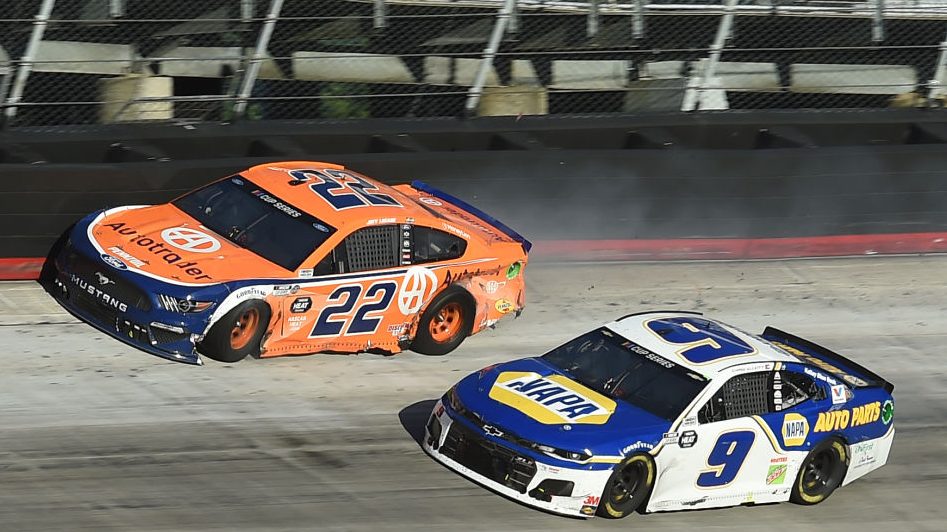 Kyle Busch’s elimination guarantees that there will be at least one driver in next month’s Cup championship race at Phoenix who wasn’t in last year’s title event.
But who will it be?
Chase Elliott, Alex Bowman and Kurt Busch seek their first championship race appearance. Brad Keselowski looks to make the title race for a second time but first since 2017. Joey Logano attempts to keep his unique streak going. He’s made it to the title race in even-numbered years (2014, ’16 and ’18) but never in an odd-numbered year.
“I feel like we got a good shot at getting to the Championship 4,” Logano said.
Last year’s championship race had Kyle Busch, Martin Truex Jr., Kevin Harvick and Denny Hamlin.
The Round of 8 begins Sunday at Kansas Speedway (2:30 p.m. ET on NBC).
MORE: Winners and losers at Charlotte Roval
This marks Elliott’s fourth consecutive year in the Round of 8, but he’s never advanced to the championship event.
“We see the same people make the final four every year,” Elliott said after Sunday’s win at the Charlotte Roval. “We’ve been very close to asserting ourselves amongst that group. I think we’re very capable of it. I think when we’re at our best, we run with those guys. I think we’ve proved that in the past.
“We just have to be a little more consistent, eliminate those bad racetracks, I think we can make some noise.”


Crashes and mechanical issues have kept the sport’s most popular driver from a chance at the crown.
Last year, he did not finish better than 32nd in any of the three Round of 8 races. He crashed at Texas and Phoenix. Mechanical woes doomed him at Martinsville.
“We’ve progressively gotten better and better and better,” said Alan Gustafson, Elliott’s crew chief, after the Roval win. “I think we were much better than our results showed last year, our performance in the Round of 8 showed last year.”
It wasn’t just last year that the Round of 8 tracks created bad memories for Elliott.
He saw his title hopes end in 2018 at Phoenix when he was collected in a crash and finished 23rd. Elliott was turned while leading in the final laps by Denny Hamlin and finished 27th at Martinsville in 2017.
His teammate, Bowman, hopes to avoid such problems.
Bowman, who will take over teammate Jimmie Johnson’s No. 48 ride next year, advanced after finishing eighth at the Roval.
“I feel like sometimes my team at least doesn’t get the respect they deserve,” Bowman said Sunday. “I feel like (advancing) kind of like validates all their hard work.”
Keselowski could be one to watch in this round. He won a stage and finished second in the July 23 race at Kansas. Keselowski placed third at Martinsville and was ninth at Texas. He and Kurt Busch are the only remaining playoff drivers to finish in the top 10 at those tracks this season. Kurt Busch was eighth at Texas, ninth at Kansas and ninth at Martinsville.
“I feel like you’re going to have to win out in this Round of 8 and the championship race in Phoenix,” Kurt Busch said. “This group, the elite eight … are the best of the best and can win each and every week.”
Points entering Round of 8
4067 — Kevin Harvick
4054 — Denny Hamlin
4035 — Brad Keselowski
4027 — Chase Elliott
4022 — Joey Logano
4017 — Martin Truex Jr.
4009 — Alex Bowman
4006 — Kurt Busch
Points scored at Round of 8 tracks this year
Points scored by playoff drivers at Kansas, Texas and Martinsville
119 — Kevin Harvick
113 — Brad Keselowski
106 — Martin Truex Jr. (won Martinsville)
103 — Kurt Busch
96 — Joey Logano
95 — Chase Elliott
94 — Denny Hamlin (won Kansas)
79 — Alex Bowman