What it was like racing Dale Earnhardt: Recalling ‘The Intimidator’ on the track

NBC Sports will take a look at the life, legacy and long-lasting impact of Dale Earnhardt who died 20 years ago this week on the last lap of the 2001 Daytona 500 on Feb. 18, 2001. This is the second chapter in an oral history series that remembers “The Intimidator” though the voices of those… 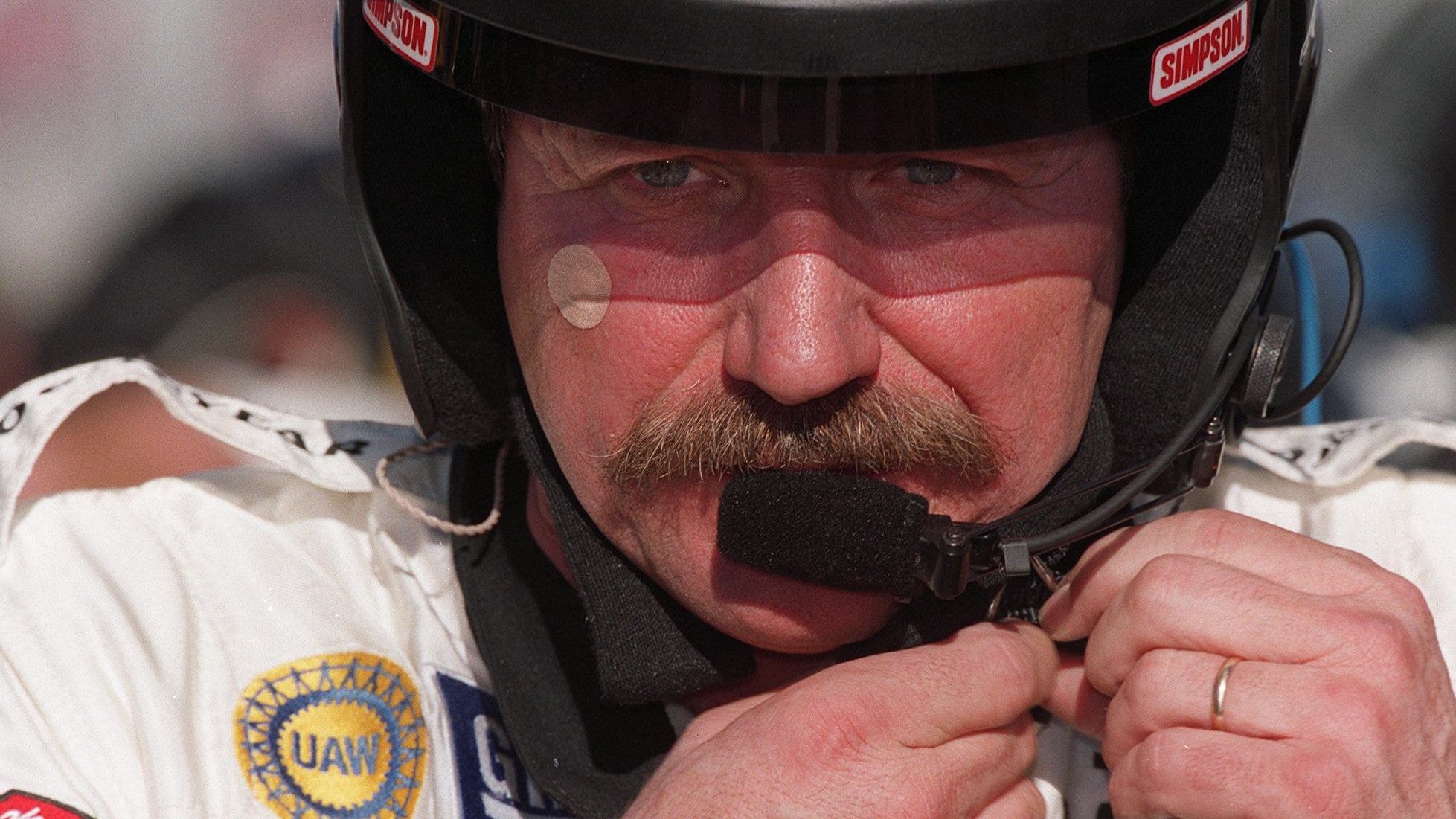 NBC Sports will take a look at the life, legacy and long-lasting impact of Dale Earnhardt who died 20 years ago this week on the last lap of the 2001 Daytona 500 on Feb. 18, 2001. This is the second chapter in an oral history series that remembers “The Intimidator” though the voices of those who knew the seven-time Cup Series champion who remains one of the biggest icons in NASCAR history.”
Two of the biggest victories in Dale Jarrett’s NASCAR career were special because of Dale Earnhardt.
“That’s what makes me so proud of the first two Daytona 500s that I won: He finished second,” Jarrett said of outdueling the seven-time champion to win The Great American Race in 1993 (when he made the winning pass on the final lap) and ’96 (when he took first with 23 laps to go). “And fortunately in the very first one, I only had to hold him off for a full lap there. The second one was holding him off for 23 laps because I knew if he got to my bumper, he wasn’t going to care that we were friends. That’s just who he was, and you knew that.
Dale Jarrett and Dale Earnhardt before the 1998 Daytona 500 (Mark J. Rebilas/USA TODAY Sports).
“When you’re passing the very best in the business at a track that he literally dominated in every fashion except for the Daytona 500, that was extremely special. Knowing how badly he wanted to win and still had not won there, that was I considered some of the best driving that I did.”
With 76 victories and seven titles in NASCAR’s premier series, Earnhardt’s talent was unquestioned in the No. 3 Chevrolet, and it also was revealed on many of the Cup Series’ biggest stages. His 1998 Daytona 500 victory came after a 20-year winless wait that included several near-misses (and a major heartbreaker on a cut tire while leading the final lap in 1990). In taking his last checkered flag, Earnhardt drove from 18th to first in the final five laps at Talladega Superspeedway.
But his greatness was realized against the backdrop of “The Intimidator” persona that could be complicated and polarizing. In perhaps his most infamous victory, Earnhardt spun Terry Labonte on the final lap of the Aug. 28, 1999 race at Bristol Motor Speedway. As skillful as he was in deftly picking through the draft at Daytona and Talladega with precision, Earnhardt is remembered as much for employing a rough-and-tumble style on short tracks.
For every “Pass in the Grass” (while battling Bill Elliott in the 1987 Winston), there also were cantankerous dustups with seemingly countless rivals — notably Geoff Bodine, whose rows with Earnhardt inspired a “Days of Thunder” plotline about a meeting called by NASCAR chairman Bill France Jr. to end their feud.
As part of a weeklong series recalling the legacy of Earnhardt 20 years after his death, NBC Sports talked to NASCAR analysts Jeff Burton, Jarrett and Kyle Petty, all of whom raced against the first-class NASCAR Hall of Famer, and also culled observations from several interviews over the years to describe the competitive fire that made Earnhardt the superstar who could play the bad guy but still stay on everyone’s good side:

Kyle Petty: Earnhardt was an incredibly talented driver, but he did not have the natural talent that Tim Richmond had. What Earnhardt had was a nod to Red Byron bolting himself into a race car when he would connect his leg to the clutch. What Earnhardt had connected the generations and the eras before him and was something you couldn’t see, couldn’t touch, you couldn’t feel, and you couldn’t describe. It’s just there. You can call it desire. You can call it hard-headedness, but there’s something you can’t see in some people and he had that by the bucketfuls.
Dale Jarrett: This isn’t a knock against Richard Childress’ teams or anyone else’s, but Dale Earnhardt won races and championships with seldom having the best car. And that proved to me in so many ways of just how good he was. When you look at superstars that have won multiple titles, especially when you get into talking about seven in NASCAR or any other sport, the supporting group that they had, they had an edge in that they had everything around them that made them better. Dale had good people. He had good cars. But seldom did he have the best car. But he made it the best car, because he was the best driver.
Petty: I think people respected his driving ability and what he could do with a car. You stood back and watched what he could do with a car, you thought, gosh, man. You knew he had a 10th-place car, and he’d just run fourth with. If you’re out there racing with the guy, you know a lot of times what they’ve got. You know it’s not the best car. It’s not the best car. He was doing  a lot with it. Whether it was (Rod) Oesterlund. Whether it was (J.D.) Stacy. Whether it was (Richard) Childress or Bud (Moore). He did stuff with Bud’s Ford that was pretty special at the time. So you respected that ability. I don’t think there was a lot of respect sometimes for the way he used that ability because you knew he was better than that.
The No. 3 Chevrolet of Dale Earnhardt and No. 88 Ford of Dale Jarrett battle for position at Daytona International Speedway (RVR Photos-USA TODAY Sports).
Jim Hunter, late NASCAR vice president of communications, in 2006: My favorite Earnhardt story is when we changed the size of the restrictor plate at Talladega the day before an event. Earnhardt was like Brer Rabbit saying, “Please don’t throw me in the briar patch!’ He says, “I hate these restrictor plates, they ought to do away with them,” and then he’d go out and win the race. We’d shrink the size of the restrictor plate hole, and Earnhardt would say, “I told them they shouldn’t do this,” and then he usually would win the race.
Ray Evernham (during a 2017 episode of the NASCAR on NBC Podcast), recalling the 1997 Daytona 500 that Jeff Gordon won after tangling with Earnhardt, who returned to the track after a late crash: The race is getting ready to go green, here comes this (No. 3) driving down pit road — roll cage laid back, roof busted, deck lid taped on. And (Earnhardt) pulls alongside, revs his motor and flips me off. He had that big goofy smile with that open-faced helmet. He could smile as wide as the opening. He wasn’t mad. He was just letting me know, “Hey, I ain’t done yet.” I always treated him with respect. I always was in awe of what he accomplished. We talked about a lot of things. I had a tremendous amount of respect for him. I wasn’t intimidated by him. I used to give it back to him, and I think he liked that. He’d grab me by the neck, but I’d get behind him and do the same thing. As we raced together, he respected my knowledge and ability as much as I respected his ability as a driver.
Certain people in your life drive you to be better. You care enough about these people or you respect them so much that you want to impress them and be on their level. Dale Earnhardt was the best in the business, and I wanted to show him that I could be the best in the business. I wanted to be worthy of being able to compete with him. It was probably one of the greatest things in my career to have that friendship with him. We yelled at one another a couple of times, but (he respected) the fact I yelled back at him. “Don’t you respect my seven championships?” “I do respect your seven championships, but don’t run into my damn car!”
The day he died I knew racing had changed for me. I just said to people it’s never going to be the same. That was my first day really as a team owner. We lost Dale Earnhardt in that race, and it never was the same. I think that day some of my fire went out … Even though I loved my time with (drivers) Bill Elliott and Kasey (Kahne), the fire was just never the same after that. It got turned down a notch.