What drivers said after Pocono Race 2

A collection of post-race driver quotes following Sunday’s NASCAR Cup Series race at Pocono Raceway: Kyle Busch – Winner: “(Denny Hamlin and I) were really close. We have kind of mirroring each other. I could gain on him in turn two, kind of stay equal to him in three, then he would get a little… 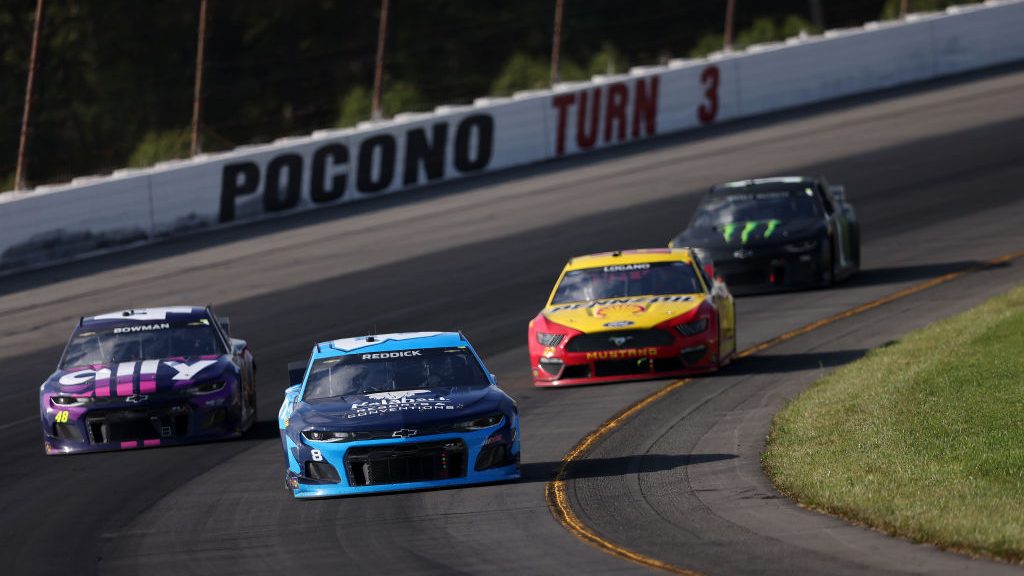 A collection of post-race driver quotes following Sunday’s NASCAR Cup Series race at Pocono Raceway:
Kyle Busch – Winner: “(Denny Hamlin and I) were really close. We have kind of mirroring each other. I could gain on him in turn two, kind of stay equal to him in three, then he would get a little bit on me getting into turn one just because I felt like I was trying to still save a little bit being behind him. I could kind of let him throw it off in there. He would really push off at turn one, so I felt like he was going to burn his front tires up with the remaining laps left. Hopefully I could get by him, get a chance to get by him. When we went down from two to three coming to the white, we went from two to three, I had a run-on off of two, and was looking low and then he blocked low, and I went back high, and he really didn’t come back to block up high. I threw it in on his outside. I was like, All right, this is it, I’m going to take it. He was coming to pit road, so… I don’t know if he just positioned himself low, so then I didn’t block his opportunity to get to pit road. That might have been what went down there, so he was already out. I had no idea that was going down. Overall once I got my quarter panel, my front fender to his quarter panel, that’s kind of when I knew I had him.”
Kyle Larson – Finished 2nd: “I don’t know. It’s surprising finish for us. Our HendrickCars.com Chevy was really loose for a majority of the race, then we got a lot of nose damage there on one of the restarts. Was off on speed. I felt like after that. Cliff (Daniels, crew chief) and everybody did a really, really good job managing the race, coached me through saving fuel there at the end. Was hoping that the 18 (Kyle Busch) was going to run out. I saw the 11 (Denny Hamlin) running out. I was, Okay, they’re teammates, they got to be close to running out. The 18 did pit a lap after us under caution. That actually probably won them the race. But, yeah, second-place finish, I thought we would be outside of the top 20. A lot of points throughout the race today; we’ll take it. Happy about the effort for sure all weekend.”
Brad Keselowski – Finished 3rd: “We ran a really good race but just didn’t have enough fuel to make it to the end like those others guys did. They beat us on power and fuel mileage. We have a lot of work to do to keep up with those guys. I am really proud of Jeremy Bullins and the team. They had the setup really well and it put is in position and we ran a great race today and maximized our day. It was a nice rebound from where we have been. We have had a lot of bad breaks with things breaking and all kinds of issues across the board. My mistakes, other mistakes. This was a really good day for us.”

Kevin Harvick – Finished 4th: “I thought our car was better yesterday than it was today. We just kind of over adjusted from what we had yesterday to where we started today. They did a good job keeping us in the game and made some good adjustments in the car. We had some good restarts and good track position and were able to pick up the pace. Just still we just lose the handling of the car more than I would like to behind cars. Other than that, we just keep clawing along.”
Bubba Wallace – Finished 5th: “It’s big. A lot of confidence for myself which is huge. It came down to fuel strategy there, but I appreciate Wheels (Mike Wheeler, crew chief), J.R. (Houston, engineer), Freddie (Kraft, spotter), telling me what to do – 80% there, 60% here, the whole time. It got so annoying, but it worked out. That’s what it takes. It takes a team effort to pull off this. Great day for us. Great day for DraftKings – their first race is the first top-five for our team. That makes you want to resign, but all-in-all, really good day. Really good weekend for us. We knew that we had the speed. Bossman was here – MJ (Michael Jordan) was here. We had the whole staff out, so it was a good day. Good weekend.”
Alex Bowman – Finished 7th: “It was an OK day for the No. 48 Ally team. Strategy didn’t work out for us. We struggled in traffic; kind of knew we would have after yesterday. But we got out front for a bit and we were pretty decent. Onto Road America next weekend.”
Tyler Reddick – Finished 9th: “My team definitely made some good changes to the No. 8 Kalahari Resorts and Conventions Chevrolet Camaro ZL1 1LE overnight. We were a lot better over the bumps today, which was one of my bigger issues on Saturday. I seemed to fire off too loose for each run but then build too tight, especially when I was in dirty air. The adjustments my team made all race long did help though. I just needed to get a little creative with the lines I was running since I had no grip when I would try to run the traction compound. We got a little off-sequence with our strategy today, but it ended up working for us in the long run when all those other cars ran out of gas during the last few laps. Our car had good speed all weekend long, so that’s great for us to build on as we head to Road America next weekend for some road racing.”
Joey Logano – Finished 10th:

William Byron – Finished 12th: “I figured we were first on four tires. We can make it. I kind of thought we were closer on fuel than we were. I thought we could get up as far as we could, and a couple of guys would have to pit and we’d save and win. So that was kind of how it was looking to work out there with the No. 2 (Brad Keselowski) and then we had to go into max save. I thought for sure we’d make it because usually you’ve got a little bit of fudge factor there, but we ran out with three (laps) to go, so not even close.”

Austin Dillon – Finished 13th: “P-13; I think we had a little better car than that. We did everything we could to get track position all day. We ran out just there at the end of stage two on the backstretch; so close to getting top-10 and stage points there. That would have set us up for the end pretty good I think, as far as track position goes.”
Denny Hamlin – Finished 14th: “Just do what I’m told: Don’t run when I’m not supposed to run, run when I’m supposed to run. The result is we pitted on the last lap for three weeks in a row. That’s tough. I mean, I hate seeing the white coming to pit road. It’s just so frustrating. Fuel mileage has got us the last two weeks. Lug nuts the week before. We’re running fast. We’re getting a little better. I think overall we had a little bit more speed this weekend than what we’ve had the past few weeks. Yeah, can’t see the checkered right now.”

Aric Almirola – Finished 16th: “Buga (crew chief Mike Bugarewicz) and the No. 10 Smithfield team made steady improvements on the car all day. We thought the fuel mileage would play out better in our favor and give us a top-10. It was nice to run up front today in clean air and get some stage points. The strategy didn’t completely work out in our favor, but overall we had a decent day, and I don’t think our finish was indicative of that.”
Cole Custer – Finished 24th: “Man, we had a fast No. 41 HaasTooling.com Ford Mustang today and definitely could’ve contended up there in the top-10 if we hadn’t run into trouble at the beginning of the final stage. It was hard to recover from that damage. We’ll learn and move ahead to Road America.”
Justin Allgaier – Finished 25th:

Ross Chastain – Finished 26th: “We had to start in the back, so it took us a little while. But once we got up into the top-10, we had the balance in the car and the grip to stay there. With pit strategy, we restarted in the top-five a couple of times. I just got into the 20 (Christopher Bell) there. I drove into (turn) three and thought I could clear him. By the time I realized I couldn’t, it was too late. I tried to keep off of him, but ruined his day and mine. Sorry to Christopher. We cut our right front and I think got him into the wall. I’m really proud of the No. 42 McDonald’s team for unloading a good backup car. We’re close – I just have to do a little better job.”