WATKINS GLEN, N.Y. — The penalty to Chase Elliott’s team before Sunday’s race marked the third time this season infractions have cost the Hendrick Motorsports driver points. Those lost points are significant and could impact his chances to win a second consecutive Cup title. Sunday at Watkins Glen, NASCAR docked him 10 points for the… 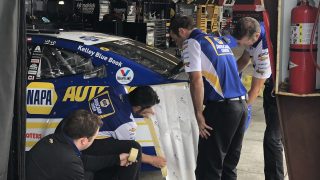 WATKINS GLEN, N.Y. — The penalty to Chase Elliott’s team before Sunday’s race marked the third time this season infractions have cost the Hendrick Motorsports driver points.
Those lost points are significant and could impact his chances to win a second consecutive Cup title.
Sunday at Watkins Glen, NASCAR docked him 10 points for the infraction with the rear window air deflector that was discovered in inspection before the race.
That came after the 25 points NASCAR took from Elliott last month when his team failed to have the proper sealed engine in its car at New Hampshire.
Elliott’s summer woes started in June at Nashville when he was disqualified because his car had five loose lug nuts after the race. He scored 38 points that day, but the disqualification reduced his point total to one and cost him the playoff point he scored for winning a stage.
That’s 72 points he lost because of those infractions. The most a driver can earn in a race is 60 points, so it’s as if Elliott has missed one race with all the points his team has given away this year.
Chase Elliott’s crew works on his car after failing inspection twice before the Watkins Glen race. (Photo: Dustin Long)
And it’s likely more than 72 points lost. Elliott has had to start at the rear five times this season. While he made it into the top 10 to score points in the opening stage each time, how many more stage points could he have scored if he had started closer to the front?
If Elliott had those 72 points he’s lost from infractions, he would rank third in the season standings with three races left. Instead he’s seventh.
What’s the big deal? He’s going to make the playoffs anyway some would say.
Should Elliott finish the regular season seventh in the standings, he would earn four additional playoff points. But if he finished the regular season third, he would receive eight playoff points.
So, he could lose out on four playoff points. Add the playoff point he lost for the Nashville disqualification and that’s five playoff points that could be gone.
Then consider this: Had Elliott not won at Martinsville in last season’s penultimate race, he would not have advanced to the Championship 4 in Phoenix and competed for the title. Kevin Harvick finished five points ahead of Elliott and would have taken the final transfer spot if Elliott had not won Martinsville
That’s why points matter.
And why it is disconcerting how many points Elliott’s team has thrown away this season.
FRIENDLY DUEL
Kyle Larson rode on the plane with Denny Hamlin to Watkins Glen this weekend. Hamlin didn’t wait on Larson after the race since Larson was delayed with all the duties of a winner.
That’s OK, Larson rode back on the Hendrick Motorsports team plane.
Larson and Hamlin have not let their race for the regular-season championship — and the five extra playoff points that go with it — sour their friendship.
“You can still be friends with your competitors,” Larson said before the race. “When you’re on the racetrack, I want to beat him as bad or moreso than other people just because he is a friend and we are competitive. You can still be friends.. … I think when you can separate the two (on the track and off the track) that’s good.”
It’s easy for Larson to do that because, he says, “I’m a friendly person. I feel like I’m easy to get along with.”
Larson’s win Sunday at Watkins Glen moved him into a tie with Hamlin for the points lead. Hamlin has led the points since late February.
“Honestly, I like this because it’s making me keep my form through the whole year,” Hamlin said of the pressure from Larson. “It’s really pushing me to treat every race like it’s a playoff race. … Had this been a 100-point lead like earlier in the season, maybe you’re just kind of relaxing a little bit, and then all of a sudden you’ve got to turn it on when the playoffs come on. This is pushing us to go all out every race.”

Larson said he faces some challenges to claim the top spot by the end of the regular season Aug. 28 at Daytona.
“He’s so good at Daytona, too, so it would be nice to get a couple good weeks and get that point lead because I know he’s going to go there,” Larson said of Hamlin, a three-time Daytona 500 winner. “Anything can happen at Daytona, but I know he’s going to go there and he’s going to get stage points and he’s going to challenge for the win.
“I know he’s looking at me as the same. If he could go into Daytona being even or ahead, he’s going to feel like he’s got the advantage.”
Larson’s crew chef Cliff Daniels said he doesn’t mind such talk from his driver, knowing how that will motivate Larson.
“We think a lot alike, and we both know if somebody beats us that we have that to shoot for and that we get to go study that much harder,” Daniels said. “If I think I’m good, I’m not very comfortable, and if he thinks he’s good, he’s not very comfortable. So he’s comfortable knowing that he needs to improve today to be better tomorrow. And I’m kind of the same personality.
“I think that’s pretty healthy that he thinks that, and I think that of myself and our team, too. We’re going to look at (Sunday) and be critical.
“I know my pit crew guys really well; they’re going to be critical of our first stop. You guys are all going to write about our second stop, but my guys at the shop on Monday are going to be beating themselves up over the first stop. Me and my engineer were already talking about things we could have done to make our car better than (Chase Elliott’s car) because (Elliott’s car) was the best car at the end of the race. Like that’s a real thing.
“Even leaving here as the winner, we already know two key areas that we can be better, and I think Kyle doing that, looking ahead at some of those races, is probably not a bad thing.”


WORK TO DO
There was a lot of talk last month from competitors about a crash test of the Next Gen car and questions about it. NASCAR stated July 19 that an independent safety panel had reviewed the data from the June 30 test crash at Talladega Superspeedway.
Denny Hamlin said he wants to take a closer look at the results and have a better understanding of what the test showed.
“I won’t strap in unless I know what I’m getting strapped into,” Hamlin said before Sunday’s race at Watkins Glen. “I don’t think any of the drivers will. Hopefully in the next week or so we’re going to have those conversations and go over all the data.”
And what is he wanting to see?
“That (the Next Gen car) is not worse than our current car,” he said. “That’s it. NASCAR developed it. I just want to make sure and see that it’s not worse.
“We put SAFER barriers in for a reason — because drivers were getting their bells rung and having concussions and having issues. A lot of old drivers that raced before SAFER barriers tell me ‘I’m not right from hitting all those walls all those years.’
“If you have a car that is worse that kind of takes away the advantage of what the SAFER barrier was. Now we’re right back to where we were. As long as it’s better or equal to what we got, then I think we’re all good.”
Brad Keselowski views the matter differently.
“I think the cake is baked and we’re going to go race this thing,” he said. “Whether I’m comfortable or not matters only to the extent of being comfortable enough to focus on the performance when the car gets here.
“I’m not going to think about the safety side. It is what it is at this point.”
NASCAR informed drivers July 4 that crash testing of a Next Gen car “indicates good and comparable performance” when compared to other right front crashes with non-Next Gen cars.
The crash data review was the last item before Next Gen chassis were released to Cup organizations. Teams report they’ve been putting the car together as they wait for some parts from vendors.
This marks the first time in NASCAR history single suppliers are providing the key parts for the car instead of teams manufacturing many of those elements.
Multiple tests are planned in the coming months for the Next Gen car. Tests with multiple teams are expected to be held at least at Daytona, Charlotte oval, Charlotte Roval and Phoenix before the start of 2022.