NASCAR has been putting its Next-Gen Cup Series car through its paces before the new machine actually hits the track in earnest for 2022 — and we’ve gotten footage of one of the first big crashes, this time at Charlotte Motor Speedway. And it can give us some clues about how the car will hold… 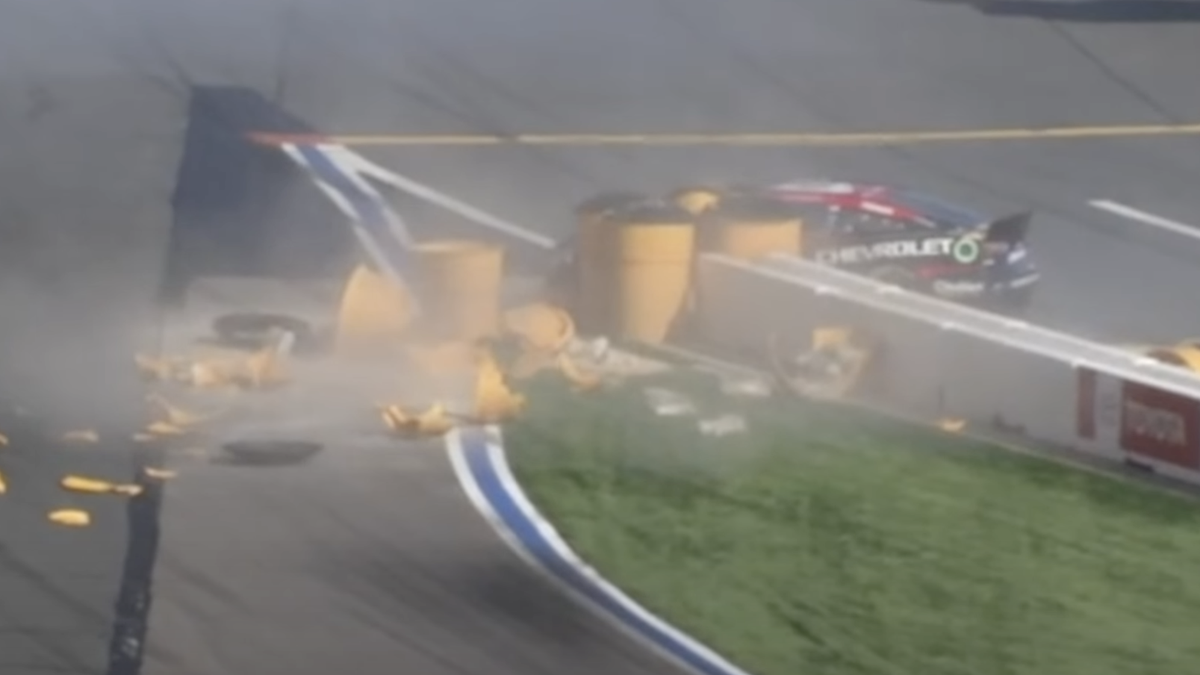 NASCAR has been putting its Next-Gen Cup Series car through its paces before the new machine actually hits the track in earnest for 2022 — and we’ve gotten footage of one of the first big crashes, this time at Charlotte Motor Speedway. And it can give us some clues about how the car will hold up next year.While this isn’t the first crash the car has endured, it’s one of the first that fans have been able to see thanks to NASCAR streaming Wednesday’s test session. Tyler Reddick got loose through turns three and four before his car slid down the track and crashed into the sand barrels stacked against the entrance of the pit road wall.The crash looks a lot more spectacular than it probably was thanks to the explosion of sand, but you can watch it below:Here it is from another angle:And heres the aftermath of the crash:Reddick’s car hit the sand barrels at relatively low speed, so there wasn’t much damage.“Hate it for the team,” Tyler Reddick said on Twitter. “The steering is a little off to the right from the contact. Other than that, the damage is all body. We will take our time to fix the car and make the adjustments we were planning on for Friday.”Reddick was also one of the first drivers to crash the prototype car back in April of 2021, when he lost control and spun at Darlington. “With this car, if you lift too hard or try to do too much on corner entry, you’re not just going to get tight or a little bit loose. You’re going to spin it out,” Reddick told Jalopnik, referring to the Darlington crash in April.He continued:And that’s what happened. I was trying to push the issue, try to find some more speed in Turn One by driving in deeper and using more steering and brake inputs to turn the car. I just over-rotated it. Without the side force being there to hold it in place, the thing just completely came around. It came around so fast that it caught me off-guard.Normally if you spin out like that, the side force built into the cars really guides it up the track and all the way down to the apron. It’s a real slow spin. Where with this Next-Gen car, it spun around and was almost facing completely backwards before I could even blink. So I did like a 360 up by the wall, but as the smoke was clearing out of the cockpit, I thought I was down by the apron, but I was still right up by the wall where I had spun. So the front of the car was still coming back around, and the right front corner kind of clunked the wall as it finished doing the 360.At an earlier session in November, driver Austin Dillon made headlines after crashing his No. 3 during a Next-Gen test, also at Charlotte. His damage appeared a lot worse because he hit the wall at full speed. NASCAR described the force he sustained as “an above-average impact.”There have been a lot of concerns around Next-Gen crashes, especially after rumors circulated earlier this year that crash tests resulted in fatal g-forces enacted on the dummies inside. Other drivers voiced concerns with the construction of the car. After all, it’s natural to approach a brand-new vehicle with caution.John Probst, NASCAR’s senior vice president of racing, has repeatedly assured drivers, fans, and media that the car is performing exactly as planned — but drivers have also pointed out just how difficult the Next-Gen car is to drive compared to its predecessor, along with how differently it handles in the event of a crash.The test sessions have helped engineers understand the way the cars handle a crash, and so far, there don’t appear to be any overwhelming concerns. But we likely won’t know the Next-Gen car’s true potential until we see our first Big One.
Read More