Ty Gibbs, who said he thought he could run in the top 10 in his Xfinity Series debut Saturday, took the lead shortly after the restart in the second overtime to win on the Daytona road course. “Dreams come true,” the 18-year-old Gibbs said. Gibbs, the grandson of car owner Joe Gibbs, went from fifth… 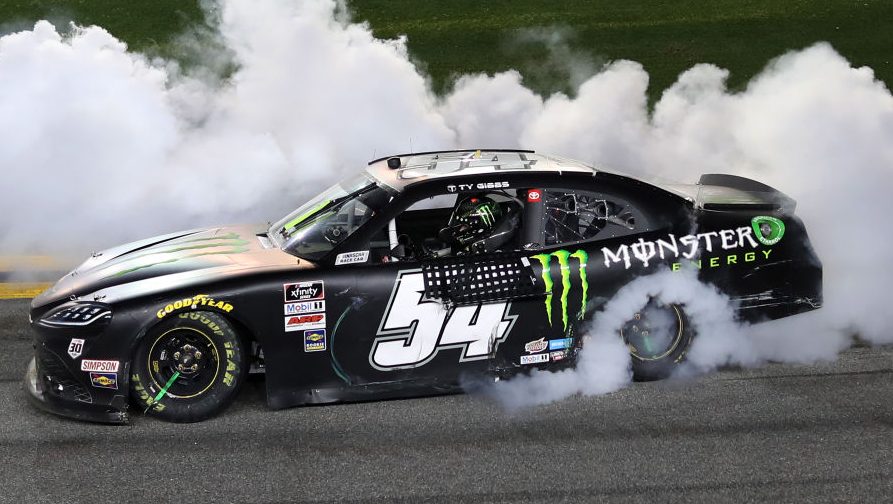 Ty Gibbs, who said he thought he could run in the top 10 in his Xfinity Series debut Saturday, took the lead shortly after the restart in the second overtime to win on the Daytona road course.
“Dreams come true,” the 18-year-old Gibbs said.
Gibbs, the grandson of car owner Joe Gibbs, went from fifth to the lead on the restart, passing Jeb Burton for first in Turn 3. Gibbs led 14 of the 56 laps.
MORE: Race results
“It’s great when you see people achieve things, particularly on our race team, but then you look and it’s your grandson,” Joe Gibbs said. “Everybody knows the experience and thrill we have when our kids do things that are special. I think every parent, every grandparent knows what I’m talking about. It’s just a thrill for us.”
Ty Gibbs is the third youngest first-time series winner.
Austin Cindric, whose car was damaged while racing AJ Allmendinger for the win in stage 1, finished second. Daniel Hemric finished third after starting at the rear because his car failed inspection three times before the race. Brandon Jones was fourth, giving Joe Gibbs Racing three of the top four spots. Jeb Burton placed fifth.
Ty Gibbs is the son of JGR team executive Coy Gibbs and racing is all he said he’s ever wanted to do. He won six of 16 ARCA races last season. Ty Gibbs will run the full ARCA schedule and select Xfinity races this season. Joe Gibbs said his grandson would run about 10 Xfinity races this year.
One of the race’s most dramatic moments came at the end of stage 1. Allmendinger and Cindric made contact coming to the finish line for the end of stage 1. Cindric closed through the final chicane and got under Allmendinger. They made contact and the contact knocked Allmendinger into the grass, which tore up the front of his car. Cindric’s right front also was damaged in the incident. Allmendinger went on to finish 35th.
Riley Herbst, running fourth at the time, went low to avoid Allmendinger’s car and went through the grass, tearing up his car.
“He drove me down to the grass,” Cindric said on his team’s radio. “I don’t like that. It’s stage 1. I don’t want to do that.”
After the race, Cindric said he wanted to talk to Allmendinger about the incident.
“I think he and I should talk about it to understand, obviously, we had two really great cars capable of winning the race,” Cindric said. “Definitely damaged mine, and I never saw him the rest of the race. … It’s frustrating, but I think we can both learn from it and try not to do that again. He’s a grown-up and he’s been around. I’m sure we can talk it out and figure out how to do better moving forward.”
Ryan Vargas, whose JD Motorsports car, was unsponsored this week until New Orleans Saints running back Alvin Kamara agreed to sponsor it with his juice bar chain, finished 37th. Vargas’ car suffered mechanical issues early before returning to finish the race.


WOW.
Coming to the end of Stage 1, AJ Allmendinger and Austin Cindric get together! (Via @XfinityRacing) pic.twitter.com/CsQZUCLrp4
— NASCAR on NBC (@NASCARonNBC) February 20, 2021

STAGE 1 WINNER: Austin Cindric
STAGE 2 WINNER: Ty Gibbs
WHO HAD A GOOD RACE: Miguel Paludo, making his first series start since 2012, finished seventh. … Brandon Brown‘s eighth-place finish has him fourth in the points after two races.
WHO HAD A BAD RACE:  Riley Herbst was running fourth coming to the end of the first stage. He ran into the grass to avoid hitting AJ Allmendinger’s car and had his car torn up by the grass. Herbst finished 38th.
NOTABLE: Ty Gibbs becomes the sixth driver in series history to win in their debut but first to do so before making a Cup start. Gibbs joins Dale Earnhardt (1982 Daytona), Joe Ruttman (1982 Dover), Ricky Rudd (1983 Dover), Terry Labonte (1985 Charlotte) and Kurt Busch (2006 Texas)
NEXT: The series races at Homestead-Miami Speedway at 4:30 p.m. Feb. 27.


Congrats to @TyGibbs_ Nothing like winning one for your grandpa
— Austin Dillon (@austindillon3) February 21, 2021