Driver breakdown of the Whoa’s and Go’s for the return of Richmond! 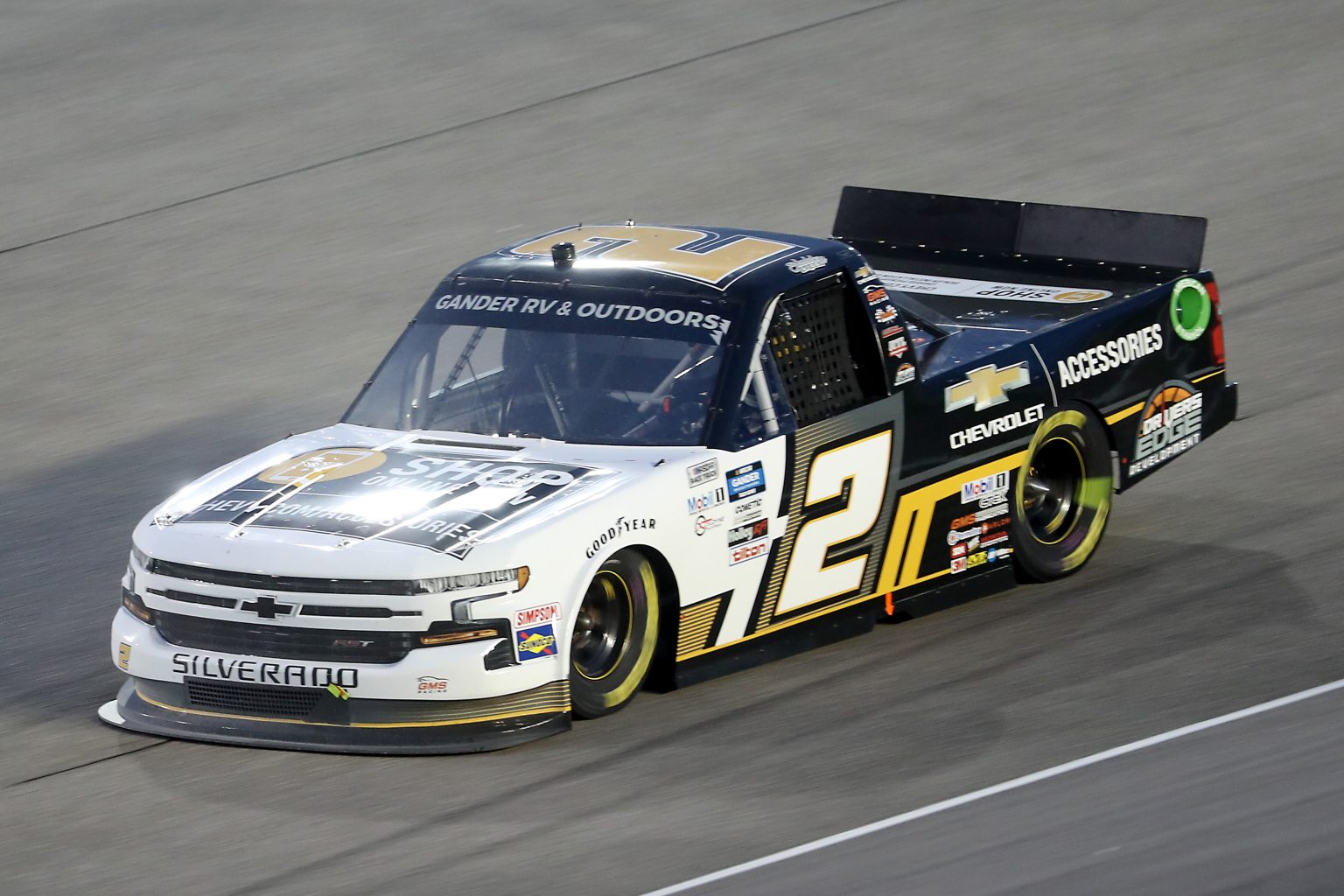 Fresh off a wild first return to Darlington in over a decade we roll into Richmond Raceway after 15 years. We’ll start with my pick for the race win this weekend, Sheldon Creed. Whats not to like about him right now other than draftkings finally catching up on the pricing for him. He has sure had his let downs but he also could have been going for 6 straight wins right now if things had fallen differently in the closing laps of these races. He leads laps, runs fastest laps and is in contention at the end for the W. You can ask anyone who is a real racing fan and they will tell you that Richond is a drivers track. You want someone with truck control that can float ‘er and play with the trottle. With the speed GMS has been bring to the track and Creed’s ability to wheel id put my money on him for the win.

Sauter – Cmon man…he cant do anything right this year. Whether its speeding on pit road or running out of talent with a few laps to go he’ll find a way to shit the bed. His equipment sure hasnt helped him either with all the mechanical failures Thor motorsports has had this year. I have lost enough money on the “this is the week for johnny train” and I wont go there. Its not the worst place to put your money but its close.

Austin hill – He is the eli manning of the truck racing world. Ya never know when hes going to decide to pull his head out of his ass. But when he does, look out. He doesnt just go win the race either he will dominate the race and if you did not have him in any lineups you will remember when you look at the bubbles. He is starting on the pole and obviously has good enough equipment to run up front and contend, therefore he deserves some shares but I would not go overboard here.

David ragan – Im biased to Ragan. Ive met the guy a few times and has been nothing but nice. His story is a long one and makes ya really want to pull for the guy. I am glad to see him back in contention and would love to see him win. He is one of the few in the field that has previous experience on this track in multiple nascar divisions but aside from last week, hadnt driven in quite some time. Last week at darlington I was heavily invested on him like most people and unforuntaley it did not pay off like I wanted it to. With him starting in the 21st spot I like him less than last week and will play him in a few. I just dont know that he has the equipment necessary to run top 10 which is what you need out of a guy valued at $10,400.

Christian eckes – eh. Go here if you want KBM trucks have been piles of shit this year and I cant trust them.

Brett Moffit – Here we go baby! Love Brett, didnt always but damnit MFer can drive. This is the same man, yes, the same man that won the truck championship and was bounced from his ride…..the nick foles of racing right here. Since then he has proved he deserves to be in great equipment and he can do it for ya at a track like Richmond. Hes still driving with that chip on his shoulder and is hungry for a win. Like creed, he could have easily won the past couple races. This could be the race to start the Moffit Mania road to the championship and show he can run with the best.

Matt Crafton – Defending champion Matty C. I make sure to have a few matty c every week simply because nobody ever takes him and he will show up when you least expect it. Had him at Kentucky earlier this year when it rain delayed and he was in my 10k lineup, so theres that.

Todd Gilliland – This track fits his style perfectly. Ive been on his heavy the past couple weeks and it was the right call especially at gateway until creed decided to fence him. With him starting 8th and being at the price he is it will be difficult for me to get there but I will and you should to for a few if you know whats smart for ya wallet.

Zane smith – What a year for zane smith. Shit before this year I did not even know who this guy was but hes been around and hes making it known this year. Hes pretty much lead at any type of track you can think of and finished top 10 or 5 with a win in there. He is a play starting 9th at 9k.

Sam Mayer – Well if you like guys that are hot, heres another one. This guy is fresh off a 2nd place run at Iowa in the arca series and has been running excellent in the few truck races hes been in this year. Starting 25th he is the core.

Rhodes – You can only get lucky like that once in a blue moon and he just had the biggest blue moon fall in his lap. Starting 2nd….he’ll fade and I’ll fade.

Kraus – Can run top 10 has proved it but starting a little too far forward for my liking. Not enough to gain here compared to loss potential.

Enfinger – I think the same goes for Enfinger as does for Kraus but if you asked me which to take out of the two I would say enfinger.

Friesen – Well heres a guy that would really enjoy some practice. They switched manufacturers in the off season before covid and it has not gone at all well for them. I believe they have had 1 top 5 this year and other than that nothing to show for these season as a whole. They will continue to struggle but i will take him in a few just to have the leverage on the field if he finally shows up or backs into a top 10.

Trevor bayne – The final guy in the field with previous experience on this track in other nascar series. I had high hopes for bayne last week coming out of the woodwork from his barista life at his coffee shop. He was running half way decent and I was curious to see the finish but unfortunatley they had mechanic issues that put them down many laps. I do see him being highly owned but I will have to join the masses and hope the 45 car holds together better than the 40.

Tyler Ankrum – Here is you leverage play of the week. With bayne right above him in pricing and taking a lot of the shares in this area our boy Ankrum becomes the play of the week. I would not go as far as to say he is a core play but he is in a GMS truck and from what we have seen the past 6 weeks, those are the trucks anyone would want to be in. He has a great record on driver tracks and I expect a few fastest laps and a top 5 out of a guy thats $7,800 and will be less than 10% owned.

Lessard – cant do it. starting spot is only reason but its reason enough with him. Oh and KBM bullshit

Tanner MF Gray – Ive been on him all year and it has paid off. Until recently you could get him at 5-8% owned in the 6-7k range and get 40+ points. Now, people have caught on. Yes, he will be owned. Yes, he should be in your lineups. Yes, he will be in the winning lobby lineup.

Carson Hocevar – will be stupid owned and can be in the winning lineup. Have to have a decent amount of shares. Cant beat the price and as long as he stays off Self he should finish top 15.

AWS – Every week that he starts beyond 14th you take him. Draftkings is missing the boat on this guy all year and have shown they are going to continue to do it. Runs solid and finishes races. Will be less that 10% owned.

Timmy hill – Love him but I love my money more

Josh Reaume – Ive tried with him and he doesnt show up. I think its decent equipment but apparently the driver is no bueno.

Norm benning – Mark my words: “I will be like Norm Benning some day.” Im so proud to say that. Heres the deal, he gets up goes to the track, straps in a seat, drives until they tell him hes to slow and get the hell off the track before he wrecks the field, collects a check and does it all over again. Im jealous. But dont put your money here, just as you shouldnt put your money on me if you ever see my name flash across the screen running 32nd.

jordan anderson – Ya know for working on and owning his own equipment this dude shows up to play on certain weekends where the field is a bit more even, such as this weekend. Richmond is a drivers track just as Pocono is a drivers track. Anderson has amazing results on Pocono which leads me to believe he could do it here. Top 15 and its like a W.

Danny bohn – I bit last week and I guess Ill bite again. At 5,900 he opens up some extra options so try it but dont go crazy.

spencer boyd – Him and anderson are about the same in my mind here. Equipment is similar, similar drivers, similar results on driver tracks, starting in mid 20’s, great price. send it!

Tate who? no thanks

Natalie decker – Instead of a Decker lineup, if you’re looking to donate your money my venmo handle is tyler-lau-1. Your money will go to something more useful, thank you.

Clay greenfield – Not good enough equipment for me to try that.

Core plays for the week:

For more of your NASCAR news and tips subscribe now to @welivefantasy where we do the homework so you dont have to!

High Rollin’ on the Hill in Las Vegas