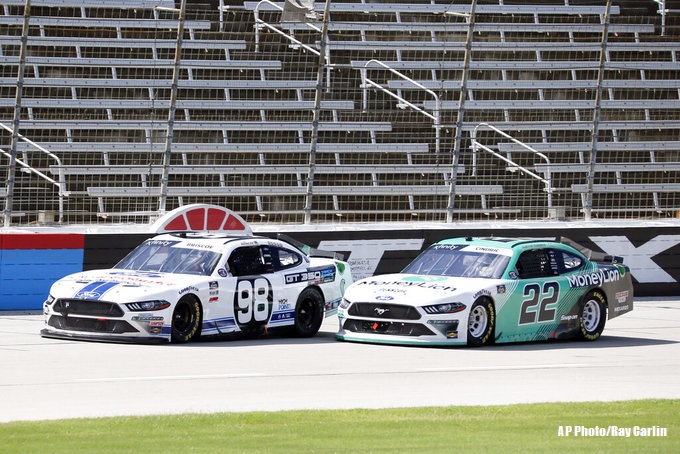 Nascar returns to the 1.5 mile Kansas Speedway for the second time this season. With this being later in the year, cooler temperatures, and a night race I expect the top grove to have even more of an advantage. We look to target the guys that can keep pace on the cushion.

Chase Briscoe – 8 wins this season and was 1 lap short of 9 last week at the Roval. Briscoe is also no stranger to running the cushion and finding speed. He will make a serious run at this win and redemption from is spin late in the going while leading last week.

Austin Cindric – Briscoe and Cindric have dominated these years 1.5 miles races. Brandon Jones did sneak in and steal one away on a late restart but we’ll get to that. If its not Briscoe dominating it will be Cindric. Do not sleep on him.

Ross Chastain – This will always be a heart pick for me because hes my boy, but this is a legitimate week to pick him. He has a truck win here and always competes on these track layouts. I expect him to lead laps and have a few fast laps. If the chips fall right he could be a sneaky snake for the W at the end.

Harrison Burton – Considering hes starting 18th and how well he ran here earlier this year I will have a good amount of Burton just like everyone else. Understand this is a chalk play, you will not gain leverage with this play its strictly to keep you with the field. I look for a top-5 for him on Saturday.

Noah Gragson – I slept on him last week and it almost cost me until herbst saved the day. I did grab about 15% Gragson only because hes starting in the front again and he is known to lead laps when starting P1. I hope he can maintain a top-5 after his original laps led.

Anthony Alfredo – Short of him getting taken out there is no reason he will not finish in the top 10. This car has the speed and he has proven time and time again that he can put it up front. I would say lock it in. Also, a chalk play but you need this one.

Brandon Jones – Its unforunate really for us degenerates that like to find the under the radar pick for a possible win scenerio that Brandon was able to steal a win away here earlier in the year. I always like to play him at 1.5 mile tracks because he runs well. I expect that to continue and I hope people forget about that win or shy away because hes starting 5th. I will not, I have a decent amount of shares placed here.

Timmy Hill – A very interesting play. Very expensive for him and for the car he will be in this week, #13. This car is probably the worst car in this stable. T. Hill did finish well in race 1 earlier this year but it was in the #61 which is their best car in the bunch. I took a few stabs just to be different and get major leverage on differential if some people fall out but I expect this to not go well.

Brett Moffitt – Not the best equipment and not the best driver but mfer knows what he is doing and will take what the car gives. He was running top-10 earlier this year here when the car had a mechanical failure. Look for him to finish 8-12 and get us way more points than we need for a price tag $7,900. Will probably be higher owned.

Austin Hill – As mentioned before the #61 car is the best car at MBS. Austin hill will be the one wheeling that car this weekend and this is a track that Hill has had a ton of truck success at in previous races. Starting 29th at $7,700 sign me up. Will be on the higher owned side.

Brandon Brown – Here is the pivot! For those of you that did not watch the Roval River race, Brandon Brown was drivin the piss out of that car. He was mid pack worked a bit of pit strategy to gain a few spots and then drove all the way to contend for the lead before the rains got out of control. He has been driving like he has something to prove to everyone and he is a 9-12 place car any given week. With that being said, earlier this year at Kansas he finished 11th. Starting 16th if he can manage an 11th again, he will get us 38 points. Doesnt seem like a lot but hes almost a sure fire 11th place finish and if you look around him there isnt much more to grab that could get you 30+ points without something crazy happening. I expect him to be less that 6% owned. Plus, he’s a dudes’ dude.

Josh Williams – Another guy here that is better than his starting spot. He is easily a top 15 car on most weeks. Does not have much proven success at the 1.5 mile tracks but I know that car and Josh are capable of better than 23rd and Ill take a few chances at it. This is also because I feel that the options are very limited down here.

Jesse Little – Oh you Little bastard, haha. He makes me money and then costs me all the money the next week. I somehow always find myself on this damn train and tell myself I will not do it again but the minute I dont he’ll throw 45 pts on the board. So, I am here again. 1 note: he is in the #15 car instead of the #4 car and to my knowledge the 15 is nowhere near the 4 but Ill take my chances because I know Little can maintain a decent speed on these tracks. Starting 30th gives us great upside.

Bayley Curry – I actually feel pretty safe with this pick considering his performances this year on tracks similar and his performance here earlier this year. I see a potential top 20 or worst case low 20’s which gets us enough points for him to pay for himself. I would use him to get ya back up top for some lap leaders.

Any other drivers not mentioned are very risky. Could they pay off, absolutely but I like to keep my money on the more realistic and reliable outcomes.

Thanks again for reading and following us here at We Live Fantasy. If this information help you make some earnings message us and let us know! Check us out on our social media pages @WLFBETS and find us on youtube to see our latest uploaded breakdowns of NASCAR, NFL and PGA.