Take a look at the winners and losers following Sunday’s Cup race at Talladega Superspeedway:WINNERSRoss Chastain: Chastain’s journey from watermelon farmer to NASCAR racer got even sweeter Sunday afternoon. Chastain watched as the leaders ahead of him — Erik Jones and Kyle Larson — washed high through the tri-oval in a fight for the win, allowing… 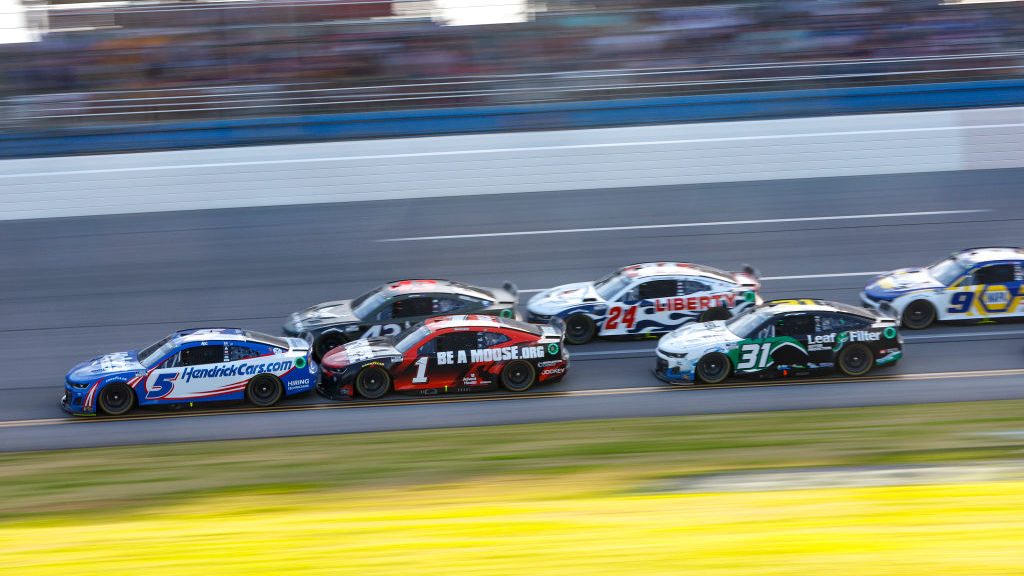 Take a look at the winners and losers following Sunday’s Cup race at Talladega Superspeedway:WINNERSRoss Chastain: Chastain’s journey from watermelon farmer to NASCAR racer got even sweeter Sunday afternoon. Chastain watched as the leaders ahead of him — Erik Jones and Kyle Larson — washed high through the tri-oval in a fight for the win, allowing the No. 1 Chevrolet to charge underneath with a push from Austin Dillon for his second career win. Chastain has two wins and six top-five finishes in the last eight races, the exceptions being a 19th-place finish at Richmond before an engine failure at Bristol dirt. After rallying from a speeding penalty at Lap 36 that caught him one lap down until the end of Stage 1, Chastain is now the second driver to score multiple wins this season, joining William Byron, who won at Atlanta and Martinsville.Austin Dillon: Dillon was quiet at Talladega but was in the right place when it mattered. As the leaders veered high, Dillon stayed tucked behind Chastain and pushed the No. 1 car to the victory and scored the runner-up finish. Dillon has finished inside the top 10 in five races and has three finishes of third or better.Kyle Larson: In 31 previous superspeedway starts, Larson had scored no top fives and led 31 total laps. Sunday, Larson finished fourth and led 32 laps. The No. 5 Chevrolet was in position to make a move for the win entering the tri-oval, running second behind Jones but moved to the right with Kurt Busch‘s Toyota still there, slowing Larson and sending Busch into the wall. Nonetheless, Larson leaves with a fourth-place finish for the second week in a row, his first string of top-five finishes since an Auto Club win and runner-up result at Las Vegas.Erik Jones: He may not have the win or even a top five to show for it, but Erik Jones left the final corner of the race with a strong chance of standing in victory lane. The No. 43 Chevrolet blocked what became the wrong move, allowing Chastain to scoot through for the win. But Jones led 25 laps at Talladega, his most of the season and most in a race since Darlington in May 2020, when Jones paced the field for 27 laps in the No. 20 Toyota for Joe Gibbs Racing.Michael McDowell: McDowell has two consecutive top-10 finishes. He finished eighth Sunday, a week after placing ninth on the dirt at Bristol. This marks the first time since the opening three races of 2021 that McDowell, who won that year’s Daytona 500, has scored consecutive top 10s. The No. 34 team hasn’t gotten off to a great start this season with six finishes of 24th or worse, but three top 10s and four top 15s show the team is still capable of producing good showings.LOSERSDenny Hamlin: Even when Hamlin’s luck seems to be taking a turn for the good, it seems it will still go wrong. Hamlin was running inside the top 10 as the final laps drew near. But the No. 11 team shorted Hamlin by one second’s worth of fuel, forcing Hamlin to pit from sixth with two laps to go. Hamlin still has just one top-10 finish through 10 races — his Richmond win on April 3. He finished 18th Sunday.Brad Keselowski: Talladega appeared to be a key race for Keselowski to score significant points and a potential win as he battles back from a 100-point penalty. Instead, the active wins leader at Talladega finished 23rd, trapped one lap down after his second speeding penalty of the day. The No. 6 Ford remains 29th in driver points. He is 111 points outside the playoffs.Tyler Reddick: Tyler Reddick was 0.33 seconds away at Bristol dirt from entering Talladega with a win. The highly-discussed contact from Chase Briscoe negated that, and it only got worse at Talladega. Reddick finished last — 39th — Sunday after motor issues sent the No. 8 car to the garage on Lap 31. Sixteen races remain in the regular season and Reddick sits one point out of the playoff picture.Joey Logano: Logano is always a contender for the win at a superspeedway, but the No. 22 Ford took a hard right into the wall after a restart stack-up at Lap 90 resulted in contact from Bubba Wallace. Logano bounced off the wall and into traffic in the middle of Turn 1, getting hammered by Ty Dillon and others en route to his first DNF of 2022, a 32nd-place finish. The 2018 series champion had finished second (Martinsville) and third (Bristol dirt) in the two races leading into Talladega, but the No. 22 couldn’t avoid calamity Sunday.Chase Briscoe: One week after knocking Reddick out of the win and finishing 22nd at Bristol, Briscoe took a vicious hit at Talladega when Daniel Hemric lost a motor, got turned entering Turn 3 and came back across traffic into the nose of Briscoe’s car. A split second later, Briscoe was slammed in the right front by Chris Buescher, who had nowhere to go. Briscoe, who won at Phoenix in March, left with a 37th-place finish, capping a week to forget.