A career that Jeb Burton admits came close to ending, saw the benefits of not quitting Saturday when he won his first Xfinity Series race. Burton was declared the winner when rain stopped the race 23 laps from the scheduled finish at Talladega Superspeedway. While the 28-year-old son of Daytona 500 winner Ward Burton has… 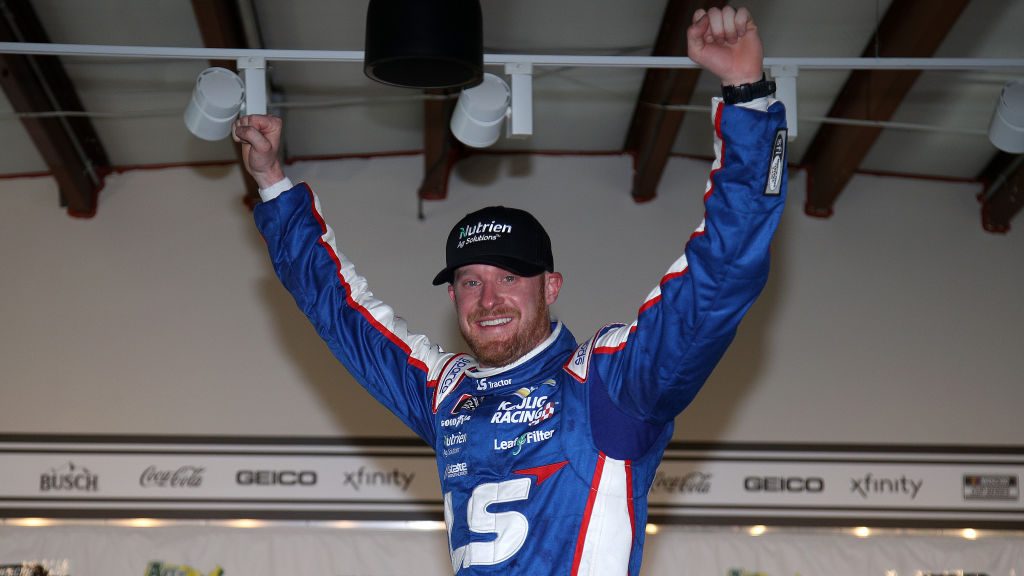 A career that Jeb Burton admits came close to ending, saw the benefits of not quitting Saturday when he won his first Xfinity Series race.
Burton was declared the winner when rain stopped the race 23 laps from the scheduled finish at Talladega Superspeedway.
While the 28-year-old son of Daytona 500 winner Ward Burton has raced in NASCAR since 2012, this is his first full-time season in any of the national series in the past six years.
“There were a couple of years there where I was running three or four races, couldn’t find sponsorship, my confidence was low just because I wasn’t in the right stuff,” Jeb Burton said. “Man, it was frustrating. Racing can tear you apart.
“I want it so bad. I want to win races for myself, for my family. I know I can do it. The partners that are behind me now are unbelievable. It was close (to quitting). That’s where that emotion comes from. I try not to cry. It means a lot to me. I put every ounce of energy into trying to make it in this sport.”
MORE: Talladega race results
Jeb Burton became the fourth first-time winner this season with Saturday’s victory.
Austin Cindric finished second and was followed by AJ Allmendinger, Riley Herbst and Ryan Sieg. Noah Gragson finished sixth to collect the $100,000 Dash 4 Cash bonus for the second consecutive race.
Jeb Burton, who said he had more than 300 text messages congratulating him less than an hour after the race, joins Ty Gibbs (Daytona road course), Myatt Snider (Miami) and Josh Berry (Martinsville) as drivers who scored their first career Xfinity wins this season.
Four first-time winners through eight races in a season are the most since the series’ inaugural season in 1982.
The Dash 4 Cash drivers for Darlington (May 8) will be Gragson, Jeb Burton, Cindric and Allmendinger.
STAGE 1 WINNER: Justin Haley
STAGE 2 WINNER: Noah Gragson
WHO HAD A GOOD RACE: Jeb Burton’s first career series win makes him and Ward Burton the ninth father/son combo to win in the Xfinity Series. … Austin Cindric has finished in the top two in four of the first eight races this year. … Ryan Sieg’s fifth-place finish is his best of the year. … Tommy Joe Martins finished a season-best 11th. … Timmy Hill placed a season-best 13th.
WHO HAD A BAD RACE: After rallying to score points in both stages, Brandon Jones was collected in a crash in the final stage and finished 38th. This marks the third time in the last four races he’s finished 30th or worse. … Ty Dillon also was eliminated in that crash and finished 35th for Joe Gibbs Racing.
NOTABLE: Jeb Burton gave Kaulig Racing its third consecutive win at Talladega Superspeedway. Justin Haley won both Talladega races last year.
NEXT: The series races May 8 at Darlington Raceway (1 p.m. ET on FS1)