Let the chaos begin. This is the round many drivers feared in the Cup playoffs. After the second round opened at Las Vegas, the series heads to Talladega Superspeedway for Sunday’s race (2 p.m. ET on NBC). The round ends next week at the Charlotte Roval. Talladega and the Roval are the two wildcard races… 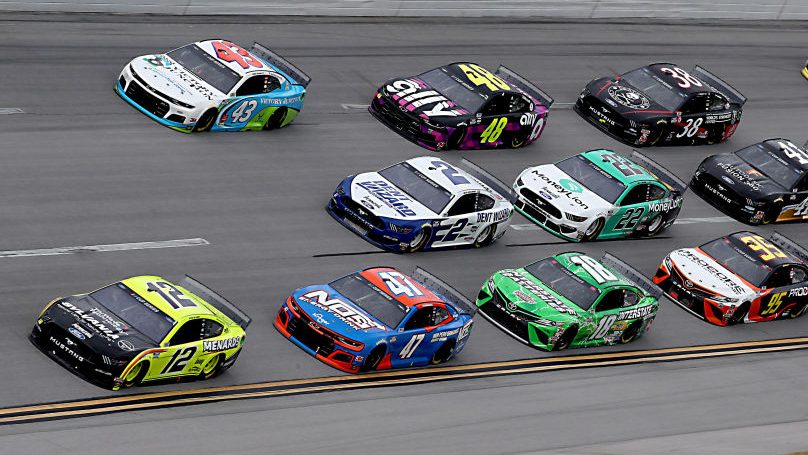 Let the chaos begin. This is the round many drivers feared in the Cup playoffs. After the second round opened at Las Vegas, the series heads to Talladega Superspeedway for Sunday’s race (2 p.m. ET on NBC). The round ends next week at the Charlotte Roval.
Talladega and the Roval are the two wildcard races of the playoffs and the point swings could be big as drivers look to advance to the next round. Kurt Busch, who won last weekend at Las Vegas, is the only driver assured a spot in the next round at this moment.
Talladega could send another driver to the next round or provide a non-playoff driver – maybe Jimmie Johnson, Erik Jones or Bubba Wallace, among others – with a memorable moment.
Whatever happens, chaos likely will play a key factor.

Here is all the info for the Sunday Cup race at Talladega:
(All times are Eastern)
START: David J. Mollahan, retired United States Marine Corps Colonel, will give the command to start engines at 2:08 p.m. The green flag waves at 2:20 p.m.
PRERACE: Cup garage opens at 7 a.m. Drivers report to their cars at 1:30 p.m. The invocation will be given at 1:49 p.m. by Barbara Embry, chaplain of Citizens Baptist Medical Center. The national anthem will be performed by the 313th United States Army Band at 1:50 p.m.
DISTANCE: The race is 188 laps (500 miles) around the 2.66-mile track.
STAGES: Stage 1 ends on Lap 60. Stage 2 ends on Lap 120
TV/RADIO: NBC will televise the race. Coverage begins at 1 p.m on NBC with NASCAR America, followed by Countdown to Green at 1:30 p.m. Race coverage begins at 2 p.m. Motor Racing Network’s radio coverage will begin at 1 p.m. and also can be heard at mrn.com. SiriusXM NASCAR Radio will carry the broadcast.
STREAMING: Watch the race on the NBC Sports App
FORECAST: The wunderground.com forecast calls for sunny skies with a high of 69 degrees and no chance of rain at the start of the race.
LAST RACE: Kurt Busch scored his first win of the season, claiming the victory last week at Las Vegas. Matt DiBenedetto was second. Denny Hamlin was third.
LAST POINTS RACE AT Talladega: Ryan Blaney beat Ricky Stenhouse Jr. by 0.007 seconds in June. Aric Almirola placed third.
STARTING LINEUP: Click here for starting lineup
CATCH UP ON NBC SPORTS’ COVERAGE:
Friday 5: Can history repeat for No. 3 car at Talladega 20 years later?
Team Penske looks to extend Talladega dominance amid 2020 woes
With casino still a hope, Atlanta track headed for a repave and “reprofiling”
NASCAR releases Cup rules package for 2021
RCR, Hendrick to collaborate on Chevy engine
2021 NASCAR Cup schedule features new tracks, bold changes

Justin Haley earned his third win of the season – all on superspeedways – with his victory Saturday at Talladega Superspeedway.
Michael Annett finished second and was followed by Ryan Sieg, Noah Gragson and Brandon Jones. Daniel Hemric placed sixth. Ross Chastain overcame an incident shortly before the end of the stage 2 and rebounded to finish seventh.
Three playoff drivers finished 20th or worse. Chase Briscoe, who already is headed to the next round, was 20th, Harrison Burton was 24th and Justin Allgaier was 30th.
Click here for race results
POINTS
Ross Chastain’s seventh-place finish moved him into the final transfer spot heading into next weekend’s elimination race at the Charlotte Roval. He leads Michael Annett by three points.
Chase Briscoe, who won last weekend at Las Vegas, and Justin Haley have both advanced to the next round.
Click here for points report


Justin Haley went from 10th to the lead in the final 10 laps to win Saturday’s Xfinity playoff race at Talladega Superspeedway and advance to the next round.
It is Haley’s third consecutive superspeedway win. He won at Talladega in June and at Daytona in August. Only Dale Earnhardt and Dale Earnhardt Jr. had won three consecutive Xfinity races on superspeedways.
“Got this thing into the Round of 8, that’s the most important,” Haley told NBCSN.
MORE: Results and driver points report
Haley was leading when the caution came out on the last lap for a crash on the backstretch that collected playoff driver Harrison Burton. On the lap before, Chase Briscoe lost the lead and hit the wall.
Michael Annett was 16th with 10 laps left and finished second. Ryan Sieg went from 18th with 10 laps to go to finish third. He was followed by Noah Gragson and Brandon Jones.
Ross Chastain entered the race below the cut line to transfer. He did not score points in the first stage and was turned on a restart late in stage 2 and hit by Colby Howard. He rebounded o finish seventh. Chastain goes into next week’s race at the Charlotte Roval holding the final transfer spot. He’s three points ahead of Annett.
“I’ve just got to have a great run next weekend,” Annett said.
STAGE 1 WINNER: Chase Briscoe
STAGE 2 WINNER: Chase Briscoe
WHO HAD A BAD RACE: Riley Herbst crashed after contact with Austin Hill.  Herbst finished 36th. … Austin Cindric was eliminated when he was hit from behind as the field pitted under green. The contact sent Cindric’s Ford into the inside SAFER barrier. He finished 35th. … Justin Allgaier went to the garage on Lap 96 after his car was smoking.
NEXT: The series competes on the Charlotte Roval at 3:30 p.m. ET on Oct. 10. The elimination race will air on NBC.


Raphael Lessard led when the caution came out on the final lap to win Saturday’s NASCAR Truck Series race at Talladega Superspeedway.
It is the first career series win for the 19-year-old Kyle Busch Motorsports driver. Trevor Bayne finished second.
Chandler Smith finished third and was followed by Rhodes and Codie Rohrbaugh, whose team was penalized before the race because of an inspection violation. Jordan Anderson finished sixth.
POINTS
Todd Gilliland and Christian Eckes each failed to advance to the next round of the playoffs. Gilliland suffered an engine issue about halfway through the race. Eckes was collected in last-lap accident.
Click here for Truck race points after the race
Click here for points reset for next round of playoffs

Nineteen-year-old Raphael Lessard scored his first career NASCAR win when officials ruled he was in the lead as the caution came out on the last lap of Saturday’s playoff race at Talladega Superspeedway
The caution came out on the final lap for a multi-truck crash that ended the playoff hopes for Christian Eckes, who was involved in the incident. Todd Gilliland also was eliminated. Gilliland, who entered the race below the cutline to transfer, had an engine failure halfway through the race. Gilliland finished 28th.
“Oh my gosh,” Lessard told FS1. “That was awesome. I don’t know who was behind me, but he gave me a heck of a push and I can’t thank him enough because he’s part of that win too. He pushed me as hard as he could and I was just holding on for the ride. Then the caution came out at the right time. I’m so happy. This was my first time doing a burnout from a race win and I loved it. Hopefully we can do it some more.”
MORE: Race results
Lessard, a rookie for Kyle Busch Motorsports was pushed into the lead by Ben Rhodes moments before the caution waved.
Trevor Bayne finished second for NIece Motorsports. Bayne said he would finish the season for Niece Motorsports. Chandler Smith finished third and was followed by Rhodes and Codie Rohrbaugh, whose team was penalized before the race because of an inspection violation. Jordan Anderson finished sixth.
The end was set up by a late caution. Sheldon Creed lost the lead with seven laps to go while leading and that brought out a caution.
STAGE 1 WINNER: Austin Hill
STAGE 2 WINNER: Derek Kraus
WHO HAD A GOOD RACE: Trevor Bayne finished second for his best finish since coming to the Truck Series in September. … Codie Rohrbaugh’s fifth-place finish is his best since he was third at Daytona in the season opener. … Jordan Anderson’s sixth-place finish is his best since he was second in the season-opening race at Daytona.
WHO HAD A BAD RACE: Playoff driver Zane Smith was collected in a Lap 13 crash that eliminated seven Trucks. “I was just an innocent bystander,” Smith told FS1. Smith finished 33rd. Smith still advanced to the next round of the playoffs. … Todd Gilliland’s race ended early because of an engine issue and he failed to advance. … Christian Eckes finished 18th after he was caught in the last-lap crash and failed to advance in the playoffs.
NEXT RACE: The Round of 8 begins at 4 p.m. ET Oct. 17 at Kansas Speedway on Fox.