Twenty years after Dale Earnhardt’s magical victory at Talladega Superspeedway, Austin Dillon hopes the No. 3 car can repeat history Sunday. Earnhardt scored his final Cup victory on Oct. 15, 2000, charging from 18th to first in the final five laps. Austin Dillon seeks to lead the No. 3 car back to victory lane at… 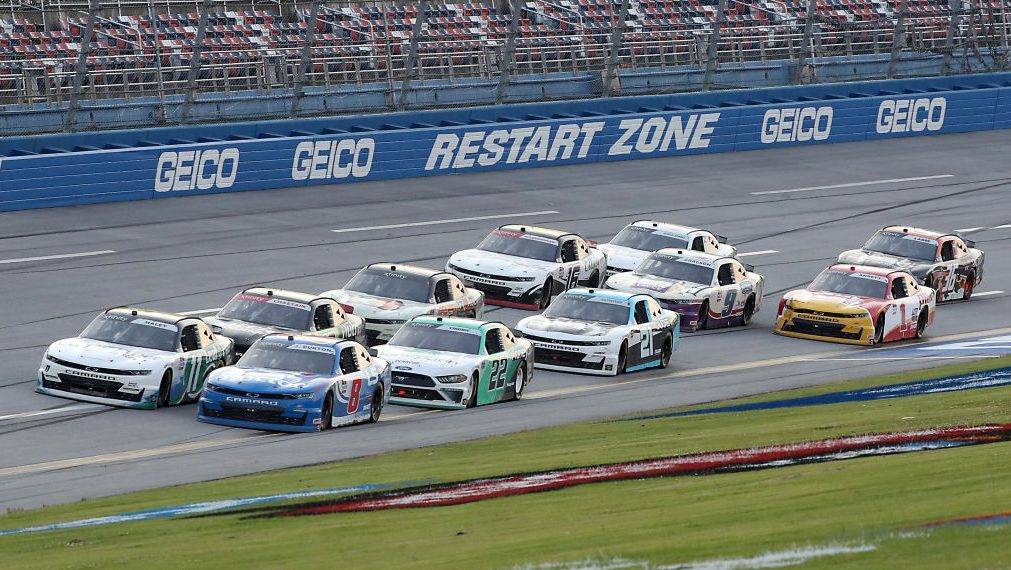 Twenty years after Dale Earnhardt’s magical victory at Talladega Superspeedway, Austin Dillon hopes the No. 3 car can repeat history Sunday.
Earnhardt scored his final Cup victory on Oct. 15, 2000, charging from 18th to first in the final five laps.
Austin Dillon seeks to lead the No. 3 car back to victory lane at that track Sunday (2 p.m. ET on NBC) to advance to the next round of the playoffs. He enters the race last among the 12 remaining playoff drivers after he finished 32nd last weekend at Las Vegas. Dillon trails Alex Bowman by 32 points for the final transfer spot to the next round.
Dillon, 10 years old when Earnhardt won that 2000 Talladega race, recalls the event. He’s well familiar with Earnhardt’s 76th and final Cup win.
“It was a spectacular race,” Dillon said. “Seeing him come from the back to the front and make the moves he had … I think that was amazing.”
Running 15th with four laps left, Earnhardt passed six cars on the backstretch on the way to his win.
Dillon will seek to be closer to the front when the final lap begins Sunday, but he knows a victory could be his only chance to keep his title hopes alive.
“I’m not really worried about points,” Dillon said. “I think we need to go win the race to transfer to the next round and try to create our own destiny that way. For me, it’s throwing caution to the wind. Obviously, you’ve got to get to the end of those things to win, but a lot of these guys that have been successful at speedway racing have also led a bunch of laps and put themselves in situations to do that.
“For me, from lap one, I’m racing and doing what I can to be aggressive and keep track position to show everybody around us that we’re there, we have a fast car to work with us, and just kind of prove a point from the beginning of the race on that we’re going to be a contender at Talladega.”
Dillon’s lone Cup win on a superspeedway came in the 2018 Daytona 500. That win came 20 years after Earnhardt’s lone Daytona 500 victory.
Could Dillon again win 20 years after a momentous win by Earnhardt?
“That would be fitting for us to go win at Talladega and lock ourselves into the next round of the playoffs,” Dillon said, noting the anniversary of Earnhardt’s win.


2. After nearly 40 versions, the 2021 Cup schedule emerged
The 2021 Cup schedule was finalized after about the 40th version and more than 50 people had played a part in shaping it, Ben Kennedy, NASCAR vice president of racing operations, told NBC Sports this week.
While NASCAR executives Steve O’Donnell, Scott Miller, Brian Herbst, Ben Baker and Kennedy comprised the core group, many others within the sanctioning body, drivers, teams and broadcast partners were involved in a schedule unlike any other in NASCAR.
The Cup Series will visit three new venues (Nashville, Circuit of the Americas and Road America) and have two new races (Bristol dirt race and Indianapolis road course) next season.
“It used to be every year we announced a new schedule and it was like we moved a race by one week, but all the races were the same,” Brad Keselowski said. “Well, that’s not really much to announce. This is the first schedule announcement we’ve had since I’ve been a Cup driver that has had significant changes. I think that’s refreshing. I think the schedule needs to be bold, it needs to be changed, it needs to be dynamic every year.”
NASCAR President Steve Phelps said in November that there would be three key components to the 2021 schedule.
“We’re looking at where we’re going to have the most competitive racing that we can have, where we’re going to have full grandstands, and what does that market look like, is it a new market that we can service,” he said.

Getting to Thursday’s announcement was not easy. Unless one compares it to what the sanctioning body did to resume this season after the pandemic paused it 10 weeks. NASCAR went through more than 80 different schedules before completing its revamped version this season.
Kennedy told NBC Sports that a 2021 scheduling team of about 15 people formed shortly after last year’s Coca-Cola 600 on Memorial Day weekend. Phelps stated April 2020 as a goal to announce the 2021 schedule. Kennedy said the group had made “a lot of headway” on the ’21 schedule when the sport stopped in March because of the coronavirus.
The focus turned to resuming the sport and creating a schedule as NASCAR consulted with governors, state officials and health officials.
One-day shows, rearranging races and moving the All-Star Race to Bristol in the updated schedule this season set in motion ideas for an inventive ’21 schedule.
“I think that mentality and mindset was also brought back to the 2021 schedule as we started to think about, hey, let’s continue to really shake it up,” Kennedy said.
The changes, Kennedy notes, align with what fans told NASCAR. That led to the addition of three road course events, the notion of a dirt track at Bristol and an additional race in Darlington, among other changes.
“We think the work that Ben Kennedy has done by leading this really continues us on that journey not only for this year,” O’Donnell said, “but we’re going to continue to be bold in ’22 as well.”
Now, Kennedy focuses on the 2021 Xfinity and Truck schedules and the Next Gen car’s debut in 2022.
“There’s never a lack of something to do here,” he said.
3. One-day shows returning in 2021
Most of next year’s Cup races will be one-day shows, said Steve O’Donnell, NASCAR executive vice president and chief racing development officer.
O’Donnell said the plan is for Cup to practice and qualify for the Daytona 500, Coca-Cola 600 and championship finale at Phoenix Raceway. Practice and qualifying also will take place at the five new events on the schedule — Nashville, the Bristol dirt race and road course events at Circuit of the Americas, Road America and the Indy road course.
“We’ve certainly learned a lot this year, most good in terms of some efficiencies we can see,” O’Donnell said. “We want race fans back at the track, right? We want race fans to see qualifying and practice. We also know that as we look forward to 2021, there’s still an unknown.
“The race teams have asked us, and we’ve worked closely with them, it’s worked for us and our television partners, to be as efficient as we can in 2021 on our journey to the Next Gen car.”
4. Another dirt race?
Chase Briscoe, who came from the dirt car ranks, is thrilled about Bristol hosting a NASCAR dirt race in March.
“Anytime you can have a dirt race, I feel like that’s just going to help me,” Briscoe said. “Eldora was always one that I had circled that I felt like I could go and win (in the Truck Series), so, for me, anytime you can add any type of dirt race to any schedule in a pavement series, I feel like I’m going to have a little bit of an advantage, so I’m super excited.”
Briscoe has a suggestion for where NASCAR might want to race on dirt next if Bristol succeeds.
“I’m not sure how it’s going to race with our cars with that much banking, but I think another good possibility maybe down the road to look into this, I think Loudon (New Hampshire) would be a perfect racetrack to go dirt racing,” he said. “It’s got a little bit of bank. It would be just like the mile (-long tracks) that the ARCA cars run. I just think it would be a really cool event.
“You could have the big block modifieds come and run a big race or whatever, so I think down the road if Bristol is a good success, that Loudon would be a really good one to add that to, but I’m excited to add dirt racing. I think the fans are going to be excited. I’m excited to see how it turns out.”


Kaulig Racing’s Justin Haley (11) and JR Motorsports’ Michael Annett duel during the June Talladdega race won by Haley. (Photo by Chris Graythen/Getty Images)
5. Race within the race
One of the fascinating subplots in Saturday’s Xfinity playoff race at Talladega (4:30 p.m. ET on NBCSN) could be the duel between JR Motorsports and Kaulig Racing.
The teams have combined to win five of the last six races at Daytona and Talladega. A Kaulig car passed a JRM car for the win at Talladega in June.
Kaulig Racing’s Justin Haley has won the past two speedway races. He took the checkered flag in August at Daytona when teammates Ross Chastain and AJ Allmendinger wrecked on the last lap battling for the lead. Haley won in June at Talladega when his teammates pushed him past JR Motorsports’ Jeb Burton for the win.
The Kaulig cars of Allmendinger, Chastain and Haley ran 1-2-3 for most of the final third of the Daytona race before the incident between Allmendinger and Chastain. That incident also collected JR Motorsports driver Michael Annett.
“I heard a lot of people questioning if we were going to work as well as we have at Talladega after what happened at Daytona,” Haley told NBC Sports. “Certainly yes.”
If Kaulig Racing can control the front of the field, that could make it harder for others.
“They’re really strong at blocking,” Annett told NBC Sports about the Kaulig Racing cars. “It’s almost like they’re willing to sacrifice themselves to throw a block in those races.”
Haley admits his group defends its positions vigorously.
“I think we’ve all seen how aggressive Ross Chastain can be blocking at a superspeedway,” Haley said. “He takes the icing on the cake for that now. You’ve got to be aggressive if you want to control the race and if you want to not get dropped. You’ve got to be aggressive and that’s how it is.”
Follow @dustinlong and on Facebook