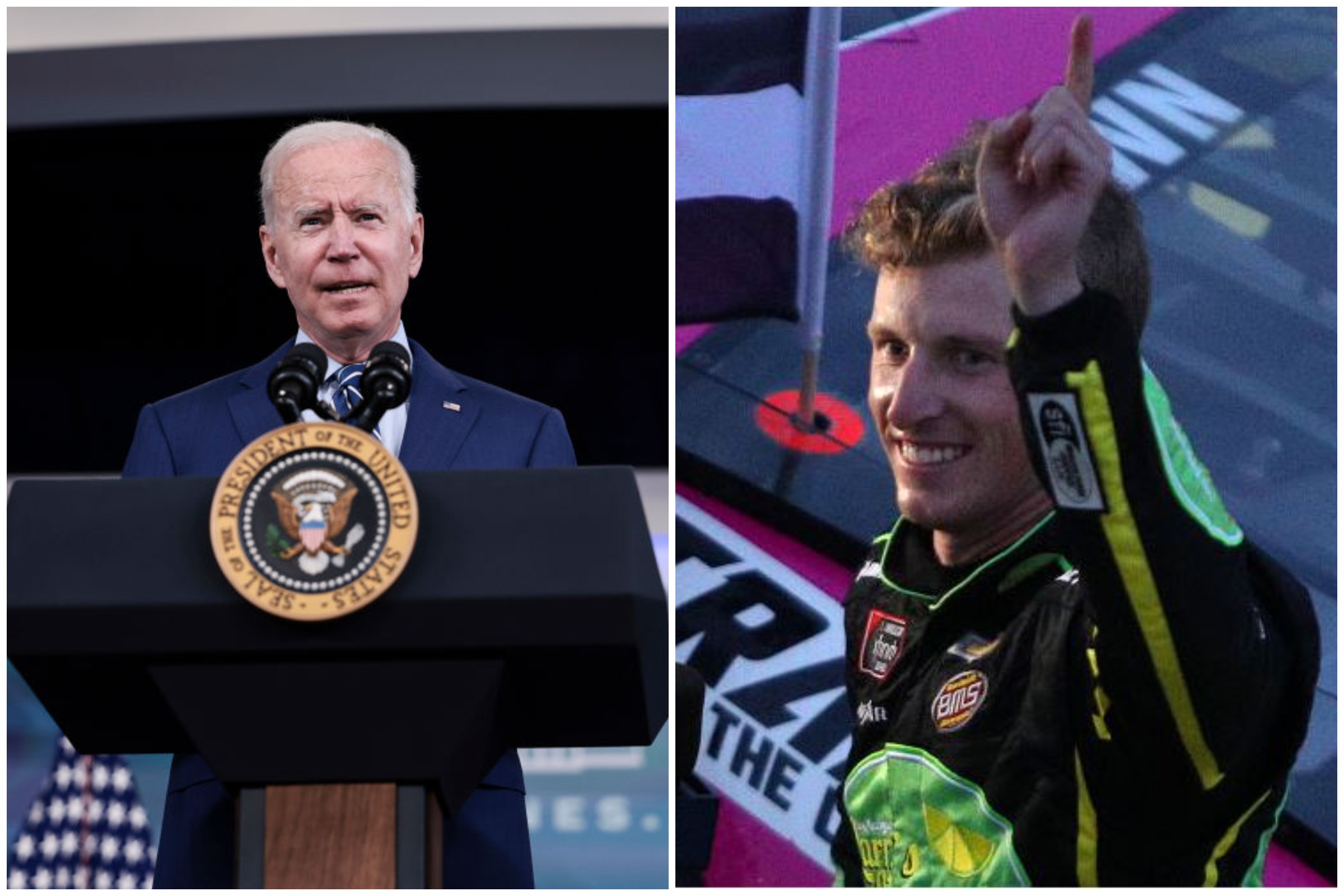 NBC Sports reporter Kelli Stavast responded to an awkward situation when she interviewed winning NASCAR driver Brandon Brown against a backdrop of race fans chanting “F**** Joe Biden.”The incident was filmed on NBC Sports after Brandon Brown secured the win at the Talladega Superspeedway in Alabama on Saturday.Brown, clearly still processing his win, said: “Oh my God, this is just everything we’ve hoped and dreamed for. Everything I’ve ever wanted to do is take the trophy home to mom and dad.”

Stavast noted the chants coming from the crowd when the camera shifted to the bleachers after Brown thanked his sponsors.”As you can hear the chants from the crowd, ‘Let’s go Brandon,'” said the quick-thinking reporter.The crowd was, however, chanting: “F*** Joe Biden.”Stavast quickly moved to deflect any further attention from the crowd and ask Brown more about the race.It is the latest case where anti-Biden chants have been heard at sporting events across the country.The chant was also heard at the Ryder Cup this week, as fans celebrated the U.S. team’s 19-9 victory over the Europeans.One video captured the moment the cheers turned into hostile chanting against the Democratic President.The president was also booed by fans at this week’s Congressional Baseball Game, one of the few occasions where a somewhat friendly atmosphere between Democrats and Republicans is attempted.
.
College football games have also become fertile ground for supporters, unsatisfied with President Biden, to share their political message from the stands.The chant appeared to have first picked up steam at the Texas A&M Aggies game against Kent State Golden Flashes earlier in the month on September 4 and again during the Coastal Carolina Chanticleers game against the Citadel Bulldogs on September 2.Donald Trump Jr suggested the chants demonstrated “the media can’t run cover for him anymore,” in an interview with right-wing news outlet The Daily Caller, earlier in September.The U.S. has continued to be divided along political lines following the election of President Joe Biden in November 2020.According to a recent poll carried out by the University of Virginia’s nonpartisan Center for Politics, roughly 52 percent of people who voted for Republican former President Donald Trump either “somewhat agree” or “strongly agree” that they want to split from the country.This is compared to 41 percent of people who voted for Democratic President Joe Biden who agree with the idea.But, some political thinkers reject the idea of red or blue states entirely and point to the fact that all states have a mixture of Republican, Democratic and other third-party voters as well.
The chants were heard after Brandon Brown won on Saturday evening.
Getty