5:33 PM ETAssociated Press BRISTOL, Tenn. — NASCAR feverishly tried to save its ballyhooed first Cup Series dirt race since 1970 from turning into a total disaster, the likes not seen since the 2008 tire debacle at Indianapolis made for one of the worst events in sport history.The Cup Series is slated to race Sunday… 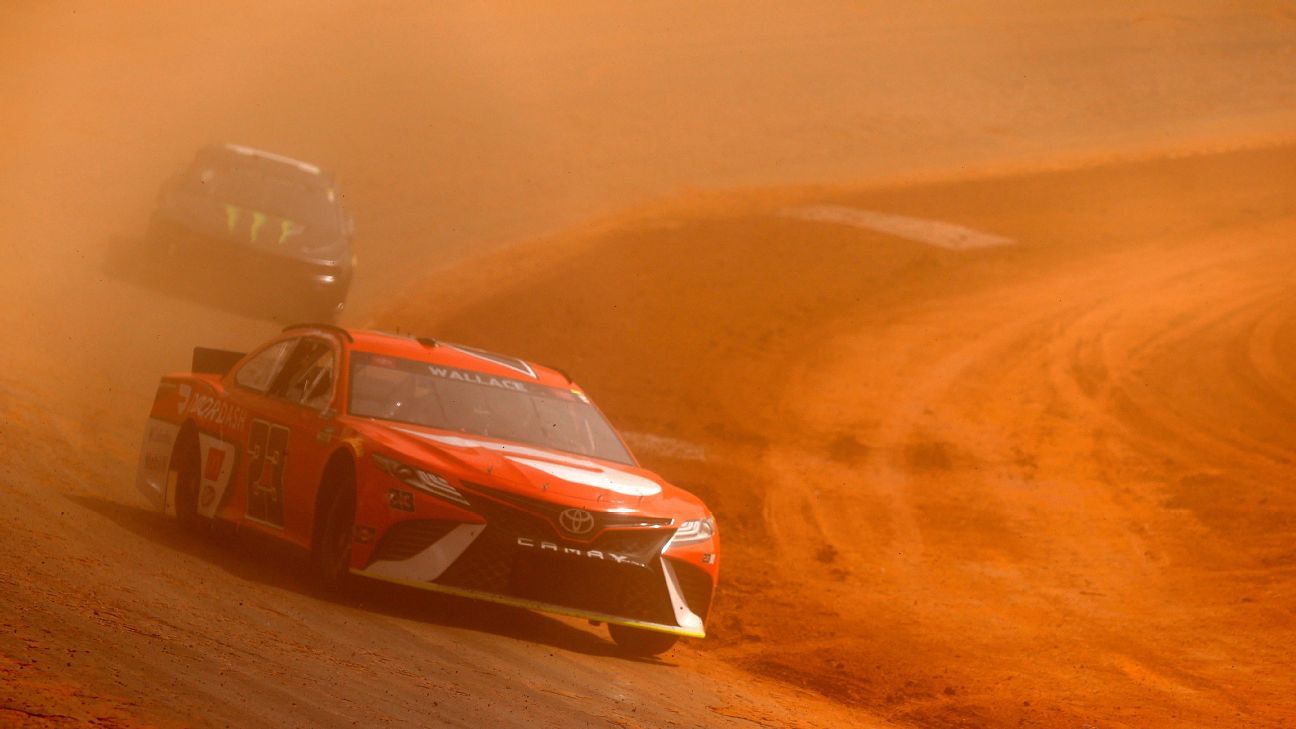 5:33 PM ETAssociated Press BRISTOL, Tenn. — NASCAR feverishly tried to save its ballyhooed first Cup Series dirt race since 1970 from turning into a total disaster, the likes not seen since the 2008 tire debacle at Indianapolis made for one of the worst events in sport history.The Cup Series is slated to race Sunday at Bristol Motor Speedway, where 2,300 truckloads of red Tennessee clay have filled the famed bullring for an experimental — some might allege gimmicky — stab at grassroots racing.But the dirt, the 28-degree Bristol banking and the leaden 3,400-pound cars appear to be a terrible fit.Yes, drivers had a blast playing in the dirt, some for the first time since they were kids. But four Friday practice sessions ultimately showed the tires can’t sustain the heavy wear. The three layers of dirt acted as a cheese-grater and the tires in turn dug deep divots into the surface.”The track is kind of coming up and just crazy big divots. It’s definitely not smooth,” said Ryan Blaney, who was fastest Cup driver on Friday.Guided by drivers Kyle Larson and Austin Dillon, both of whom raced all last week at Bristol, NASCAR made several procedural changes Saturday in a desperate bid to save Sunday’s 250-lap race.The first stage has been extended by 25 laps, the second stage by 50 laps and two competition cautions have been added. NASCAR also allotted teams one extra set of tires.The added competition cautions create additional opportunities for track prep.”We need this show to be great,” said Scott Miller, NASCAR’s vice president of competition. “We need to err on the side of caution.”NASCAR is also facing weather challenges — heavy rain has drenched the dirt and delayed Saturday activity.”We didn’t want to end up in a situation where we had 20 blown right rears and we’re talking about the Bristol dirt show 20 years later like we’re talking about the thing that happened at Indy,” Miller said.That “thing” at Indy in 2008 ruined the fan appetite for NASCAR at historic Indianapolis Motor Speedway. The Goodyear tires used on NASCAR’s new model car that year couldn’t handle the loads and began exploding during the race. To mitigate damage, NASCAR threw competition cautions every 10 or so laps to force teams to pit for new tires.There were 11 cautions for 52 laps in a 160-lap race — an average of nine laps of green-flag racing a stretch — and fans have still not forgotten.More than 400,000 turn out for the Indianapolis 500, but attendance for the NASCAR events dipped well below 100,000. This year’s Brickyard will be held on the road course after 27 years on the famed oval.Bristol also made a bold change this year by converting its facility into a dirt race as part of radical changes to the 2021 schedule. NASCAR needed a major shakeup and the dirt race joined an influx of road courses and new venues for the most adventurous schedule in sport history.Bristol, which dubs itself “The Last Great Colosseum,” wanted in on the action. The track once boasted 55-consecutive sellouts and was one of the toughest tickets in sports. But its spring race has faced a sharp attendance decline as a constantly shifting race date presented annual weather concerns.So when NASCAR broadcast partner Fox pushed for a dirt race on the Cup schedule, Speedway Motorsports said Bristol would be the guinea pig.The decision infuriated Tony Stewart, who successfully hosted seven Truck series races at his Eldora Speedway dirt track in Ohio but was passed over for a coveted Cup Series date.Out of spite, Stewart dropped the Truck series from Eldora’s schedule this season and openly wondered if Speedway Motorsports was up to managing the challenges of a dirt race.Bristol had previously converted to dirt for the World of Outlaws in 2000 and 2001, and Speedway Motorsports has hosted dirt events at other facilities with mixed reviews. Conditions at the Dirt Track at Charlotte last November made for a blinding dust bowl, but Bristol seemed to have it figured out last week when it hosted a problem-free week of racing.Saturday’s qualifying heat races for the Truck series barely made a lap before thick mud caked the windshields and reduced visibility to zero.”I honestly thought they’d go into the corner and never turn,” said Larson, one of seven Cup regulars entered in the Truck series event.NASCAR stopped the heat race and sent late model cars onto the track to turn laps and pull some of the water out of the dirt.”That’s probably the most uncomfortable I’ve ever been in a race car,” said Kevin Harvick, running his first Truck series race since 2015. “Really, really unsafe conditions so far, as far as vision goes. I just had to look left and go off what you know of the racetrack.”