If there’s one thing Talladega Superspeedway is known for, it’s chaos. But for as much chaos as the 2.66-mile track can provide, Talladega has another quality it produces: consistency in Victory Lane. In the 2010s and up through the June Cup race, the consistency has been produced by Team Penske. Since May 2012, Penske drivers… 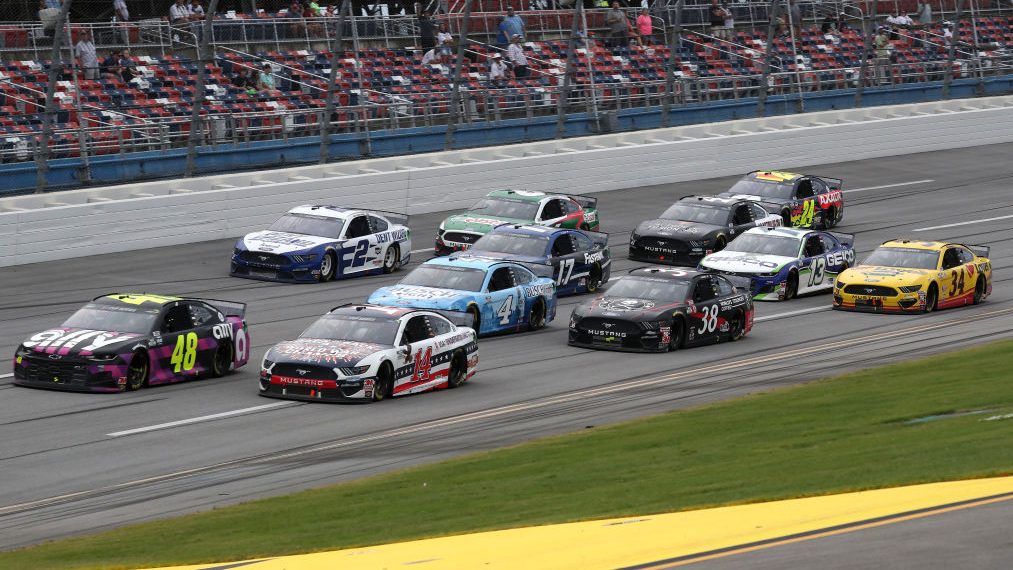 If there’s one thing Talladega Superspeedway is known for, it’s chaos.
But for as much chaos as the 2.66-mile track can provide, Talladega has another quality it produces: consistency in Victory Lane.
In the 2010s and up through the June Cup race, the consistency has been produced by Team Penske.
Since May 2012, Penske drivers have won nine of 17 races. Brad Keselowski has four of his five Talladega wins, Joey Logano has three and Ryan Blaney has won each of the last two races by .007 seconds.
The other eight races were won by Roush Fenway Racing (two wins), Hendrick Motorsports (two), Front Row Motorsports (one), Chip Ganassi Racing (one), Stewart-Haas Racing (one) and Joe Gibbs Racing (one).
When it comes to races like this weekend’s playoff event (2 p.m. ET Sunday on NBC), one would expect even more chaos and less consistency among winners.
You’d be wrong on the latter.
Penske’s three drivers have combined to win five of the last six Talladega playoff races. The winner of the sixth race was Aric Almirola in the 2018 playoff race.
Last week Keselowski observed how races at superspeedways have “ebbs and flows” with them currently resembling “a MAVTV demo derby just a little faster.”
On Thursday, the 2012 Cup champion credited Team Penske having a “great” driver lineup with its ability to win in a form of racing that’s constantly evolving.
“I think we have the strongest driver lineup in Cup right now,” Keselowski said. “I know that’s probably arguable and it’s completely subjective. That’s played to our favorite tracks like the plate tracks and we’re going to continue to try and leverage it.”
While Blaney has enjoyed recent success at Talladega with his two victories, Keselowski looks to re-establish his winning ways at the track he has five victories, the most among active drivers.
After winning the 2017 playoff race, he has five consecutive finishes of 13th or worse, including two DNFs for wrecks.
“It’s been up and down for me,” Keselowski said. “The last few races have probably been down. Last fall I thought we were going to win the race with two or three (laps) to go. We were making the pass for the lead and the next thing I know we’re all wrecked. It’s a love-hate affair with that track for sure and hopefully we’ll love it. I feel like we’re due for a good finish there.”
Keselowski enters Sunday’s race after miserable outings in the last two playoff races. He finished 34th at Bristol (power steering problems) and 13th at Las Vegas.
Talladega could be the relief Keselowski’s teammates are looking for as well.
Blaney, who was eliminated from the playoffs after the Round of 16, hasn’t had a top-five finish in the last nine races. Logano, while he has two top fives in the playoffs (third at Darlington and Richmond), hasn’t won since the March race at Phoenix. That was the last race before the COVID-19 shutdown.
Keselowski said “it is a bit strange” that Team Penske can view Talladega as a track where it can turn its season around.
“We haven’t been where we want to be on the mile-and-a-halfs, there’s no doubt about that,” Keselowski said. “The mile-and-a-halfs and road courses have been a weak spot for us. The superspeedways and short tracks have been a strong spot for us. Thankfully we have the superspeedway this weekend and couple of short tracks coming up in the next round (Martinsville).

“We need to kind of maximize out strengths and minimize our weaknesses. This weekend is certainly looking like a strength for us. We have high expectations.”