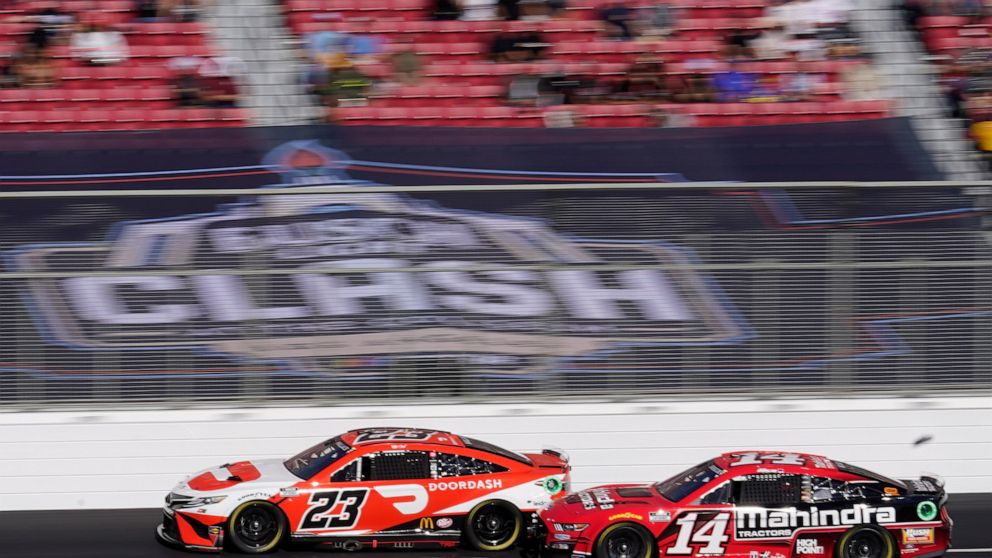 Joey Logano won the exhibition Busch Light Clash on Sunday on the temporary quarter-mile track built inside Memorial ColiseumBy JENNA FRYER AP Auto Racing WriterFebruary 7, 2022, 4:38 AM• 5 min readLOS ANGELES — NASCAR was the big winner at its glossy Los Angeles gala held inside Memorial Coliseum.In need of an energy boost ahead of its upcoming season, NASCAR broke its dated mold and staged an experimental exhibition race inside one of the most iconic venues in sports. The race itself on a temporary quarter-mile asphalt oval was a sideshow in Sunday’s made-for-Fox Sports spectacular.Just how successful was the Busch Light Clash? Two losing drivers high-fived a pair of NASCAR senior executives as they passed in the USC locker room.One was Ben Kennedy, the 30-year-old great-grandson of NASCAR’s founder and forward-thinker who pushed The Clash from its birthplace in Daytona across the country and into the Coliseum.“Really good day for the entire sport,” Kennedy said.The grand marshals were Los Angeles sporting greats and Jeff Gordon lit the cauldron built for the 1932 Summer Olympics before the race began. Celebrities walked a red carpet, the USC student section filled in early, and the crowd booed pole-sitter Kyle Busch like a bunch of old pro’s during driver introductions.The name of the race was the same, but everything else about the 44th running of The Clash was different.Joey Logano was the actual race winner and, like nearly everyone else in the industry, heaped praise on NASCAR for successfully fulfilling Kennedy’s vision.Added runner-up Busch: “Ben Kennedy and the guys at NASCAR, if this didn’t work, it was going to be ugly.”Instead, Busch was one of the drivers who high-fived Kennedy.The Coliseum could hold about 60,000 fans for The Clash, and although it wasn’t a sellout, the crowd was both strong and loud. NASCAR said at the start of the week that 70% of those who purchased tickets identified as first-time race attendees, and the buildup in Los Angeles for next week’s Super Bowl only helped publicize NASCAR’s big party.The name of the race was the same, but everything else about the 44th running of The Clash was different.“I think it was a risk. We knew that from the start,” Kennedy said. “As we’ve talked about the schedule over the past couple years, we talked about being bold, we talked about being innovative. This was something new, something different. We challenged ourselves, the team challenged themselves, to think about this event differently.“We’re really proud of the outcome.”The field was determined by heat races held earlier Sunday, and a pair of last chance qualifiers to give drivers one final chance to make the 23-car starting grid. The format made for spirited racing in the final “LCQ” as rookie Austin Cindric bounced and banged his way through traffic trying to transfer into the main event.Cindric fell short but was in good company: NASCAR champions Brad Keselowski and Kurt Busch were among the drivers who didn’t make it out of the heats.Kyle Busch started on the pole for the 150-lap feature that included a planned stop on Lap 75 for Ice Cube’s set. Busch dominated the first half but was eventually caught by Logano, who never gave Busch a chance to move him out of the way for the win.Logano won the Clash for the second time in his career. It was the fifth win for Team Penske, which has won three of the last six runnings of what had traditionally been a warmup for the Daytona 500.Nothing learned in Los Angeles will transfer into the Feb. 21 season-opening Daytona 500, but the race was the first for NASCAR’s new car. The Next Gen was a long-planned project that was delayed a season by the pandemic.The car is designed to cut costs to teams, even competition throughout the field and produce a better racing product. The Next Gen didn’t disappoint in its debut on the shortest track on the NASCAR schedule.———More AP auto racing: https://apnews.com/hub/auto-racing and https://twitter.com/AP—Sports
Read More