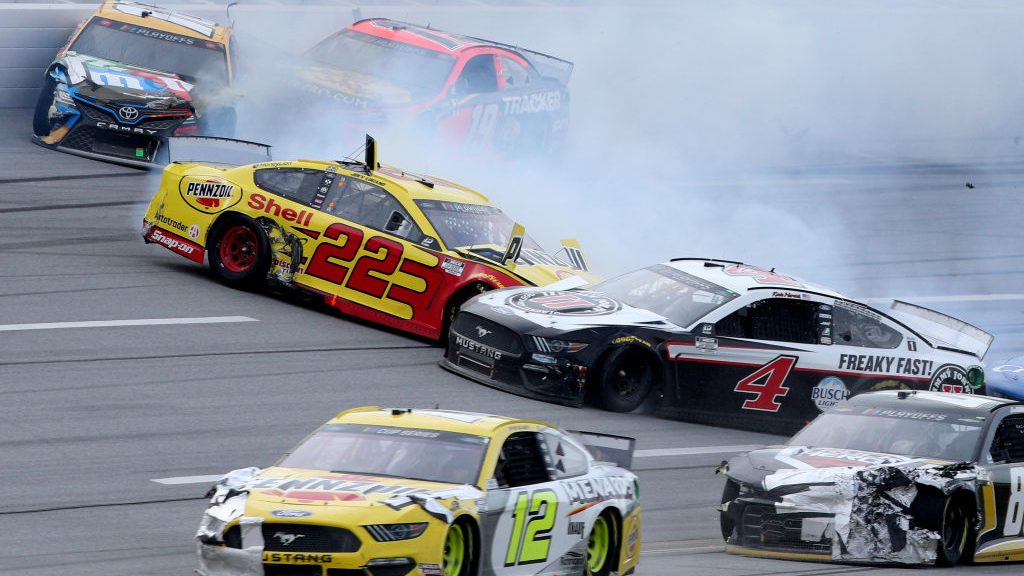 A NASCAR official said Monday that the sanctioning body needs to “get our arms back around” aggressive driving at superspeedways after Sunday’s Talladega playoff race saw 26 cars crash.
The past two Talladega playoff races have had a 37.6% spike in the number of cars in crashes compared to the previous five playoff races there. The total is based on NASCAR race reports and video evidence.
Denny Hamlin won Sunday’s race after NASCAR ruled he went below the out-of-bounds yellow line on the last corner of the last lap to avoid contact. The 4-hour, 5-minute race was slowed by a track-record 13 cautions. No driver was injured in any of the incidents.
“I hope Tony Stewart is watching because he would be proud,” Brad Keselowski said, noting Stewart’s sarcastic interview of wishing more cars had crashed at Talladega in 2012. “We wrecked every car in the field, and I wrecked four times in somebody else’s mess. This rules package just has everybody so on top of each other. Runs are just so fast and everybody wants to block and the runs are too fast to block and causes a lot of wrecks.”
MORE: Should NASCAR eliminate yellow line rule at Talladega?
Scott Miller, NASCAR senior vice president of competition, suggested Monday on “The Morning Drive” on SiriusXM NASCAR Radio that the sanctioning body may need to address driver aggression.
“I feel like we’re tearing up too much equipment,” he said. “It’s super easy for them to be aggressive out there in those tight quarters. It’s hurt the show a little bit, so we have to get back to a little bit more calculated moves than just watching in the mirror and hanging a left. We have to get back there somehow.”
Miller also said on SiriusXM NASCAR Radio: “The aggression has just gone way up on the superpseedways. We have to kind of get our arms back around that a little bit.”


The 26 cars in crashes Sunday ranks second this season to the 32 cars crashed in the Daytona 500. The Talladega playoff race has had 53 cars crash the past two years. The Daytona 500 has had 69 cars crash in its past two races.
Aggression was evident early in Sunday’s race. During the competition caution — which followed three cautions, including two for accidents — Kyle Busch forewarned what would happen.
“They keep pushing the way they’re pushing, there’s going to be wrecks galore,” he said on the team’s radio.
Busch was collected in three accidents. He heads to this weekend’s elimination race at the Charlotte Motor Speedway Roval outside a transfer spot to the next round.
Clint Bowyer tweeted Monday morning that there is “nothing that makes you feel worse than wrecking a bunch of cars at that place.” But he needed stage points and had to be aggressive. His contact with Jimmie Johnson triggered a 10-car crash about 10 laps from the end of stage 2.

Theres nothing that makes you feel worse than wrecking a bunch of cars at that place. You push because it helps, you block because it helps. We were in a position that we felt I needed to get stage points and was pushing hard to stay in position to do so. 🤬👉#roval
— Clint Bowyer (@ClintBowyer) October 5, 2020

Ty Dillon, who finished third, said the runs happen so quickly, it can be difficult for any of the competitors to react.
“Yeah, I mean, the runs are happening so fast, I’d say 20% of the times the spotters can’t physically react in time,” he said. “The drivers really have to be on it, feeling, knowing how things go. A little bit of patience goes a long way.
“You can see guys being really aggressive and it does get you to the front with these cars because they have so much grip, you can push the limits. But there is also a counter strategy to surviving these things.”