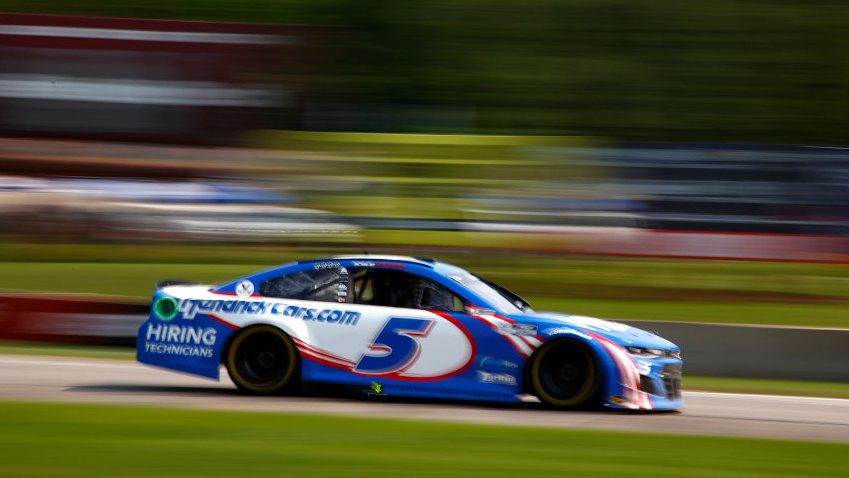 The top two remain unchanged in this week’s NBC Sports NASCAR Power Rankings.
Kyle Larson remains No. 1 and Kyle Busch is No. 2. Chase Elliott, who won last weekend’s Cup race at Road America, moves to No. 3
MORE: Road America takeaways
MORE: Road America winners and losers
Two drivers climb into the top 10: Kurt Busch and Tyler Reddick. Brad Keselowski and Martin Truex Jr. both fall out of the top 10.
NASCAR Power Rankings after Road America
1. Kyle Larson (Last week: No. 1) — Lost his bid for a top-five finish when teammate Alex Bowman had his brakes fail and spun Larson late in Sunday’s race. Larson finished 16th. He still maintains the No. 1 spot and seems in good position to keep it longer with the series headed this weekend to Atlanta. He led 269 laps there in March before losing the lead late and finishing second. Said Larson:  “We’ll go to Atlanta … where we led a bunch of laps earlier this year and try to get back on the horse.”
2. Kyle Busch (Last week: No. 2) — He finished third at Road America, giving him top-three finishes in each of the past three races. He has five top-five finishes in the past six races.
3. Chase Elliott (Last week: No. 4) — Any preseason predictions that he would win four of the seven road course races this season don’t seem out of touch. His Road America win is his second road course win in four races this season. All he needs to do is win two of the next three and that’s likely.
4. Denny Hamlin (Last week: No. 6) — His fifth-place finish is his second in the last three races. He had a spirited duel at Road America with Kyle Larson as part of their battle to be first at the end of the regular season.
5. Willam Byron (Last week: No. 3) — Did win the opening stage at Road America but his race went downhill after that and he finished 33rd. Still, his 14 top 10s are tied with Kyle Larson, Denny Hamlin and Kevin Harvick for most this season.
6. Alex Bowman (Last week: No. 5) — Brake problems late caused him to run into Kyle Larson and then have to pit for repairs. He finished 22nd, his worst finish in the past 10 races.
7. Joey Logano (Last week: No. 7) — Placed 15th at Road America, snapping his steak of four consecutive top-10 finishes.
8. Kurt Busch (Last week: Unranked) — Finished fourth last weekend, giving him four top 10s in the last five races. He’s placed sixth or better in three of this season’s four road course races.
9. Tyler Reddick (Last week: Unranked) — Finished eighth and scored a race-high 46 points at Road America. He has five top 10s in the last eight races.
10. Kevin Harvick (Last week: No. 9) — Wasn’t a factor and late pit stop dropped him further in the field, leading to a 27th-place finish. He still has four top 10s in the last six races
Dropped out: Ryan Blaney (No. 8), Brad Keselowski (No. 10)

Is Chase Elliott having a championship-style year? | Kyle Petty is back on Backseat Drivers
“(expletive) thing won’t stop worth a (expletive)” NASCAR RACE HUB’S Radioactive from Road America