Kyle Larson won at Bristol Motor Speedway — not really a big surprise or even the most interesting part of NASCAR’s first playoff elimination race. Kyle Larson received the traditional gladius sword given to the winner at Bristol, which calls itself The Last Great Colosseum. (David J. Griffin/Icon Sportswire via Getty Images)The post-race feud between… 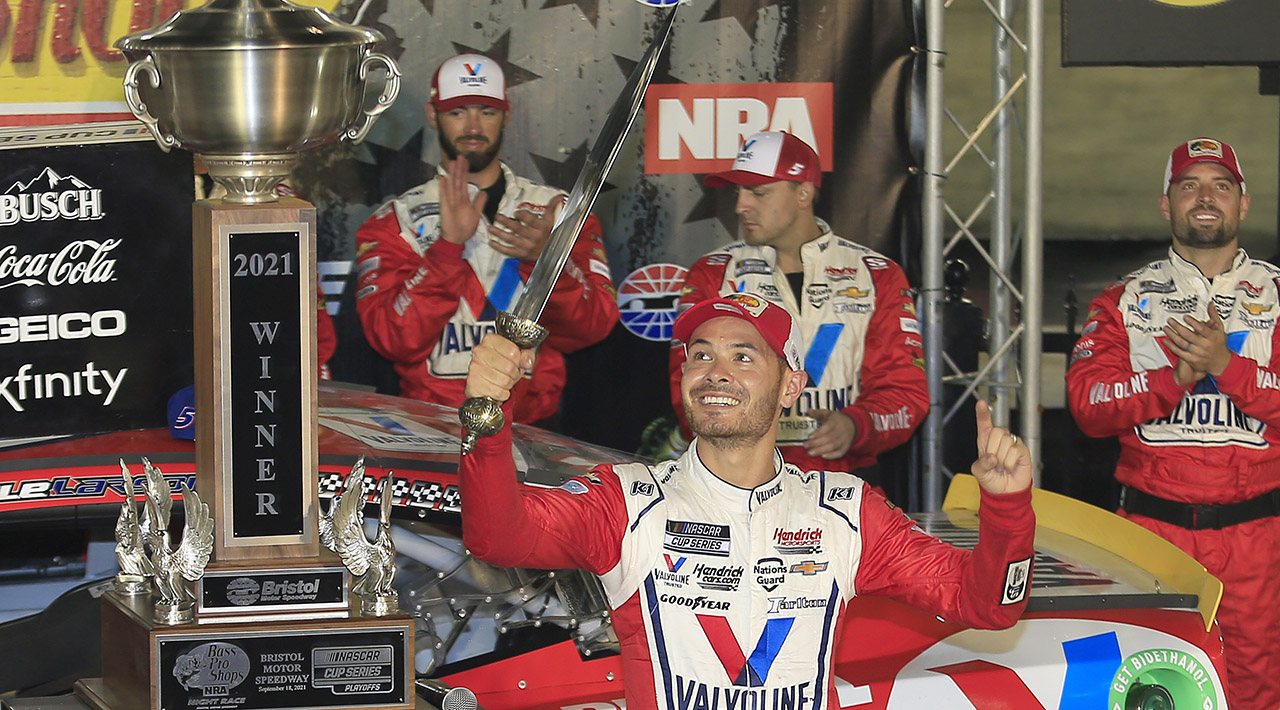 Kyle Larson won at Bristol Motor Speedway — not really a big surprise or even the most interesting part of NASCAR’s first playoff elimination race.
Kyle Larson received the traditional gladius sword given to the winner at Bristol, which calls itself The Last Great Colosseum.
(David J. Griffin/Icon Sportswire via Getty Images)The post-race feud between reigning Cup Series champion Chase Elliott and Kevin Harvick stole the show Saturday night, especially when Harvick angrily told the energized crowd: “I’m ready to freakin’ rip somebody’s head off.”The fickle crowd struggled to pick a side before settling firmly behind Elliott, NASCAR’s most popular driver.Harvick took the lead from Elliott with 33 laps remaining but the hard racing caused contact that cut one of Elliott’s tires. After a quick tire change, Elliott exacted his revenge by deliberately slowing in front of Harvick to give Hendrick Motorsports teammate Kyle Larson a chance to catch Harvick.Larson made the race-winning pass with four laps to go to earn his sixth win of the year. Then Harvick and Elliott parked alongside each other on pit road, bounded out their windows, and immediately began jawing at each other.FIRST LOOK: NASCAR’S L.A. COLISEUM TRACK”Obviously, Harvick and Chase got together. Chase was upset. Kind of held him up,” Larson said. “It got Harvick having to move around and use his tires up off the bottom. I started to get some dive-ins working off of (turn) two, got a big run, decided to pull the trigger, slide him, squeeze him a little bit, hen he had me jacked up down the frontstretch. It was wild.”Then came the pit-road confrontation.Harvick had his helmet on at first and Elliott wagged his finger in Harvick’s face. There was brief shoving, Harvick slammed his helmet in anger, and both drivers blamed the other even after the verbal sparring moved inside Elliott’s hauler for a private conversation.”We were racing for the frickin’ win at Bristol, we’re three-wide in the middle, and he throws a temper tantrum like I was just trying to get the lead and race him hard,” Harvick fumed. “Then he pulled up in front of me and just sits there until I lose the whole lead.”The crowd at that moment was very decidedly on Elliott’s side.”They can boo all the want, I don’t care,” Harvick said.Elliott, meanwhile, indicated Harvick pushes people around on the track and the pattern must stop.”It’s something he does all the time. He runs into your left side constantly at other tracks and sometimes it does cut down your left side and other times it doesn’t,” Elliott said. “He did it to me in Darlington a few weeks ago because he was tired of racing with me and whether he did it on purpose it doesn’t matter.CLICK HERE TO GET THE FOX NEWS APP”I don’t care who he is or how long he’s been doing it. I am going to stand up for myself and my team and go on down the road.”With that, the Bristol faithful was firmly Team Elliott.But the fans loved Larson, as well, and he was showered with adoration as he moved a step closer to his first NASCAR championship. Larson is the top seed and the favorite to win the Cup.”I love this place. This is by far my favorite track. This is why,” Larson told the crowd. “You guys are amazing, loud. We feel the energy while we’re out there racing. Thanks, everyone, for spending your hard-earned money to come watch us putting on a show.”Elliott had led a race-high 175 laps but finished 25th. Harvick, winless after last year’s series-leading victories, was looking to snap a 36-race winless streak on the anniversary of his final win in 2020. He instead finished second.Larson’s Cup-high sixth win of the season was a banner night for Hendrick Motorsports. All four of its drivers advanced in the playoffs after Alex Bowman and William Byron were both in danger of elimination at Bristol, the third and final race of the first round when NASCAR cuts the field from 16 to 12.Instead, Tyler Reddick, Aric Almirola, Kurt Busch and Michael McDowell were eliminated.Bowman finished third to save his playoffs, while Bowman was fifth and Chevrolet had three cars in the top-five. Three more spots went to Ford with Harvick, then Team Penske teammates Ryan Blaney fourth and Brad Keselowski sixth.Martin Truex Jr. in seventh was the highest finishing Toyota driver.END OF THE GANASSI ROADKurt Busch’s elimination from the playoffs means Chip Ganassi will not win a championship during his 20-year NASCAR career. He’s sold his team to TrackHouse Racing effective at the end of the season and Busch was his final title chance.Ganassi entered NASCAR in 2001, the year he nearly won a championship until a late season injury ended Sterling Marlin’s season early. Ganassi still competes in several other series and has three chances at the IndyCar championship starting Sunday.UP NEXT: The second round of the playoffs open Sunday at Las Vegas Motor Speedway, where Larson won his first race of the year. Kurt Busch is the defending race winner. Las Vegas is the first of three races in the round in which the field is cut from 12 to eight.
Read More