NASCAR is hosting a race on a football field the week before the Super Bowl.Sunday’s exhibition Busch Clash at the Los Angeles Coliseum (6 p.m. ET) is one giant experiment for NASCAR. And that experiment will be televised live on Fox on one of the slowest sports weekends of the year in the hopes of… 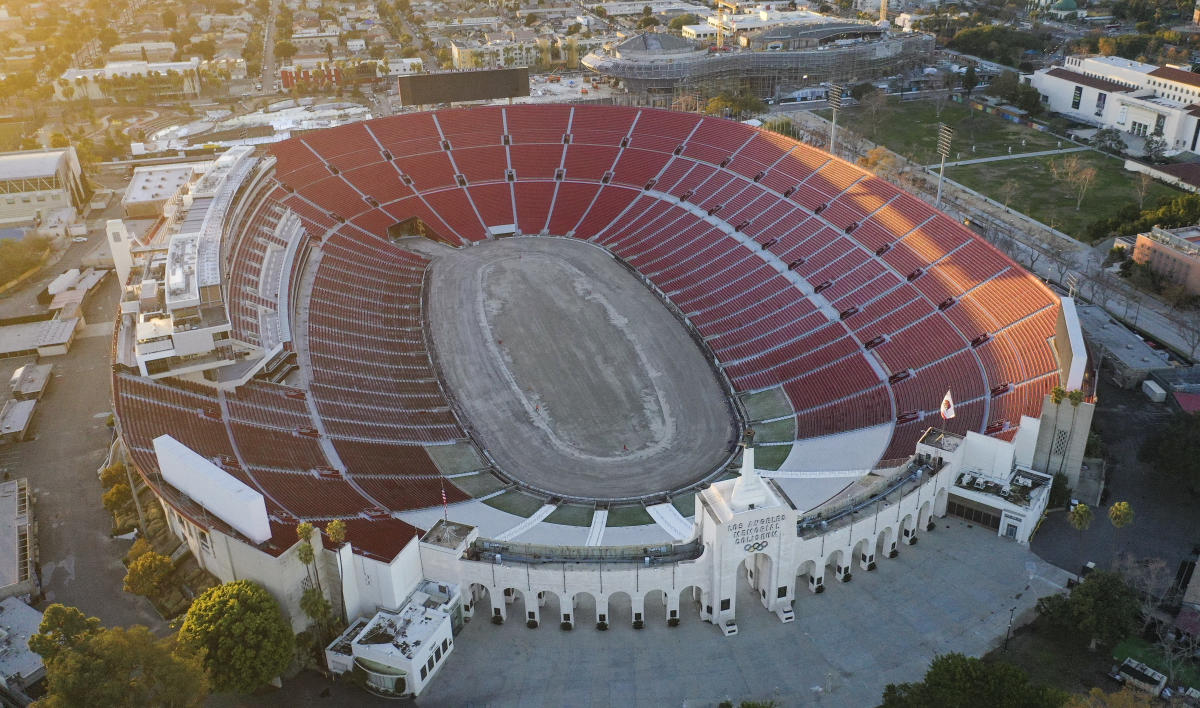 NASCAR is hosting a race on a football field the week before the Super Bowl.Sunday’s exhibition Busch Clash at the Los Angeles Coliseum (6 p.m. ET) is one giant experiment for NASCAR. And that experiment will be televised live on Fox on one of the slowest sports weekends of the year in the hopes of attracting new and casual viewers who otherwise wouldn’t be watching auto racing.As you can imagine, the track inside the Coliseum is incredibly small. At a quarter-mile, it’s roughly half the size of Martinsville Speedway, the smallest track that currently hosts a Cup Series race.The Coliseum is also is the shortest track to host a race in modern NASCAR history, though there’s a long racing tradition of hosting races at stadiums. Bowman Gray Stadium, the home of Winston-Salem State University football, regularly hosts racing on the asphalt track around the football field on the weekends. And NASCAR raced at Chicago’s Soldier Field four times, though the last race there happened 65 years ago.For reference, a quarter-mile is the size of the running track around your local high school football field. And no, we weren’t kidding when we said that the NASCAR track at the Coliseum is located on top of the football field.The asphalt track was pieced together in sections on top of the existing grass field that USC football uses. While that grass will likely have to be replaced by the time the track is taken down and the stadium is cleared out in two weeks, it’s the platform for a track that’s taken nearly two months to construct.The field is separated from the track by some plywood, plastic sheeting, and a bunch of dirt and fill to make the surface for the track totally level. The track itself is pretty level too, unlike most NASCAR tracks.Most NASCAR tracks have significant banking in the corners to help the cars go faster and have more grip while turning. That banking means that the outside wall is higher than the inside part of the track.Making the outside walls significantly higher at the Coliseum would obstruct the views from the seats closest to the track. That’s not a great idea. So the banking at the Coliseum track is just 2.5 degrees in the corners. For comparison’s sake, the banking at Martinsville — also the flattest oval track the Cup Series races on — is 12 degrees in the turns.The Los Angeles Coliseum has been transformed into a NASCAR track. (Photo by Meg Oliphant/Getty Images)The track isn’t the only thing that’s newNot only is NASCAR trying the Clash at a track and stadium it’s never raced at before, but teams competing in the race will also be using cars that have never been raced before.The 2022 season is the first for NASCAR’s long-awaited new car and new car rules. The car, which was delayed by a season because of the coronavirus pandemic, is largely built from parts via standard suppliers — a drastic shift in the way that NASCAR teams have operated over the last decades. Powerhouse teams have typically built their own cars with their own parts and spent time, money, and workforce power to develop the parts and pieces to find as much speed as possible.Now the cars are going to be largely the same throughout the field, though they’re going to be significantly different for drivers. The steering systems and transmissions are different than they used to be, and drivers can even use a rear-view camera instead of a mirror.While the car has been tested at tracks like Charlotte, Daytona, and Phoenix, teams haven’t raced it in any capacity yet. Sunday’s event will be a test session of sorts for teams as drivers get acclimated to their new surroundings in race conditions before the Daytona 500 in completely different conditions in two weeks.What will the racing look like?NASCAR certainly hopes that the combination of new track and new car equals a compelling product for fans having football withdrawals on Sunday. The sanctioning body purposely moved the Clash to the Coliseum from Daytona and placed it a week earlier than usual and late on Sunday afternoon to attract as many eyeballs as possible and build anticipation for the Daytona 500 on Feb. 20.In an attempt to highlight NASCAR’s financial investment in Sunday’s race, NASCAR vice president Steve O’Donnell said earlier in the week that the track’s construction cost “significantly” more than $1 million. But saying that a track constructed on a football field in the middle of one of the most historic stadiums in the country cost more than $1 million is a lot like saying your house in Los Angeles cost “significantly” more than $100,000. It doesn’t reveal too much.What will it take for a good return on that investment? It’s not totally clear, though it reasons that NASCAR would like a viewership number significantly higher than the 2.5 million people that watched the 2020 Busch Clash.And if those viewers see a few wrecks, NASCAR likely won’t object either. Speeds at the Coliseum track are going to be relatively slow because of the track’s tight nature and flat corners. And it’s hard to see how there will be more than one racing lane in the corners because of the lack of banking.The combination of slow speeds and no racing room could force drivers to bump each other out of the way to make passes, especially late in the race. Wrecks can lead to good highlights and entertainment for both casual and hardcore viewers alike. Fox, the network broadcasting the race, has already promoted the potential of a last-lap pass for the win via a driver bumping or wrecking another out of the way in the final two corners.But the race’s success doesn’t hinge on a last-lap bump and run, or a crash-filled afternoon or evening. Because there are so many unknowns, an event without any major issues with the temporary track or the largely untested cars should be seen as a positive result.
Read More

Who will win NASCAR’s Busch Light Clash at the Los Angeles Memorial Coliseum?
Weekend schedule for NASCAR Clash at the Coliseum