NASCAR will see “if there is something else we can do immediately” to keep cars from getting airborne after Joey Logano’s crash Sunday at Talladega Superspeedway. Scott Miller, NASCAR senior vice president of competition, made the comments Monday during “The Morning Drive” on SiriusXM NASCAR Radio. “We’re disappointed that what transpired transpired, but super happy… 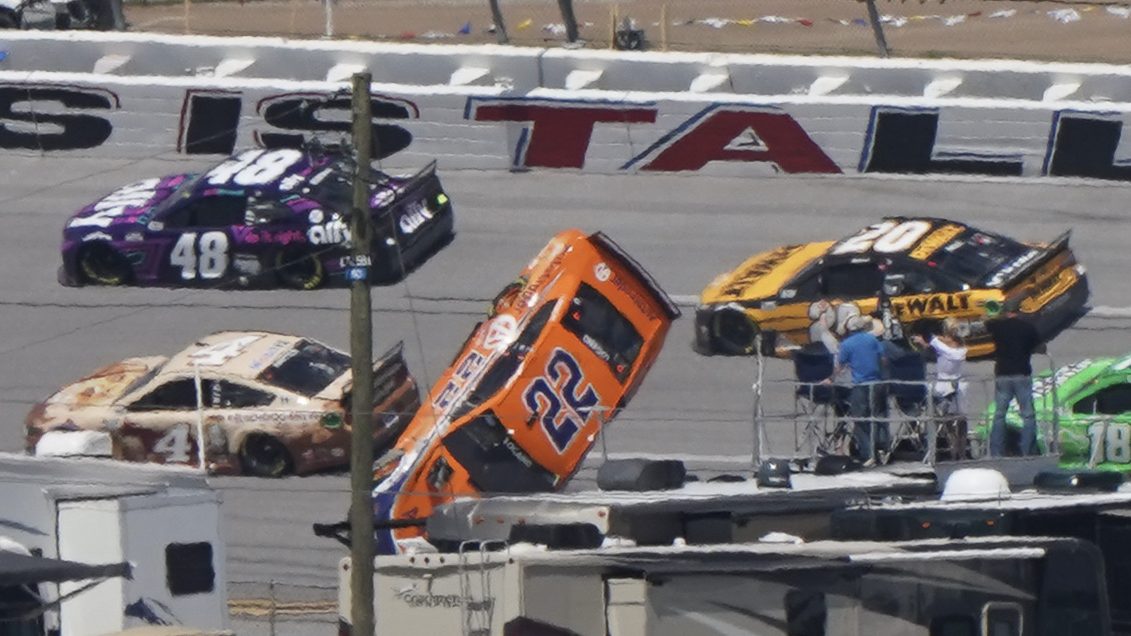 NASCAR will see “if there is something else we can do immediately” to keep cars from getting airborne after Joey Logano’s crash Sunday at Talladega Superspeedway.
Scott Miller, NASCAR senior vice president of competition, made the comments Monday during “The Morning Drive” on SiriusXM NASCAR Radio.
“We’re disappointed that what transpired transpired, but super happy that Joey was OK and the roll hoop — and all the things that needed to protect him — did,” Miller told SiriusXM NASCAR Radio. “But cars getting up in the air is not good. It’s something that we’ve been working on and will continue to work on.”
While NASCAR has made numerous safety improvements through the years — roof flaps, among others — to keep cars on the ground, Miller said: “Obviously, we saw this weekend that it’s not enough, and we will continue to work, as we always do, to see if there is something else we can do immediately to counteract those effects.”
While applauding the measures that kept him safe in the crash, Logano expressed frustration with what led to getting in the air.
“I am wondering when we are going to stop because this is dangerous doing what we are doing,” he said. “I got a roll bar in my head. That is not okay. I am one hit away from the same situation Ryan Newman just went through (in the 2020 Daytona 500). I just don’t feel like that is acceptable.
“A lot of it is the big spoiler and the big runs and all the pushing. It is nobody’s fault. Denny (Hamlin) is trying to go, and (Ricky Stenhouse Jr.) is trying to go. It is a product of this racing. We have to fix it though. Someone already got hurt and we are still doing it, so that’s not real smart.”
Logano posted pictures of the interior of his car Monday on his Instagram page:


Logano’s crash was triggered when Stenhouse made contact with Hamlin that sent Hamlin’s car into the left rear of Logano’s car. That contact turned Logano’s car. As it went down the banking, it was hit by Stenhouse’s car and air lifted Logano’s car.
Bubba Wallace’s car clipped Logano’s car as it was upside down. The contact, though, was nothing like the impact Corey LaJoie had when he struck Ryan Newman’s upside down on the last lap of the 2020 Daytona 500. Newman was hospitalized for two days and missed three races as he recovered from a head injury.
Travis Geisler, competition director at Team Penske, said Sunday that the team planned to examine the car Monday.
“We’ll go through the car (Monday) with NASCAR, a lot more of a mind for inspection on what happened to the car,” Geisler said. “Then you kind of move on to the event. What occurred? What can we do to try to make things better?
“Certainly no question the size of the rear spoiler is challenging to overcome. When you get backwards with that much kind of in the air, it’s a lot to deal with. That’s something we’ll try to learn. There’s only two more (superspeedway races this season) left, but one more race left is too many if you’re not 100% sure you’re as safe as you can be. We’ll do what we can there, try to learn with the NASCAR folks, try to address anything we can. Certainly car-wise we’ll do the same.”
After Newman’s crash last year, NASCAR officials made a series of changes that included reducing the size of the throttle body and the addition of support bars.