Winning iconic endurance race ranks high on bucket lists By Holly Cain DAYTONA BEACH, Fla. – For decades, NASCAR’s top competitors have entered the Rolex 24 At Daytona, the traditional season opener for all of motorsports, as eager participants and humble students. For much of NASCAR’s early existence, road racing was considered a selective skill… 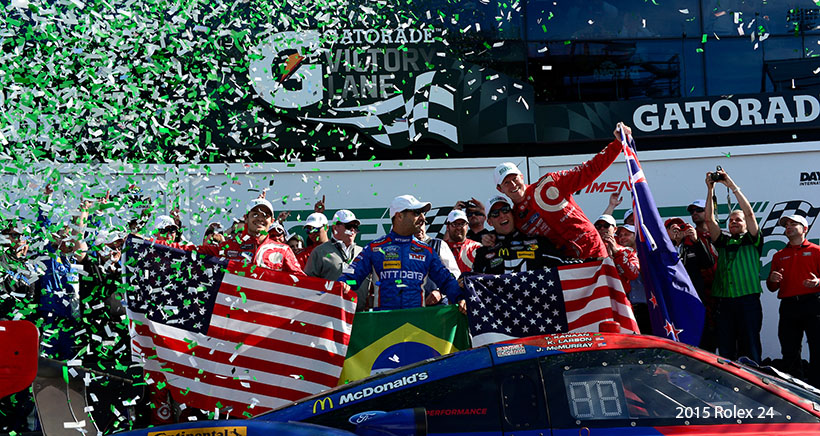 By Holly Cain
DAYTONA BEACH, Fla. – For decades, NASCAR’s top competitors have entered the Rolex 24 At Daytona, the traditional season opener for all of motorsports, as eager participants and humble students. For much of NASCAR’s early existence, road racing was considered a selective skill and not a necessary talent. But the team-style Rolex competition driving ultra-high-tech sports cars presented a huge opportunity on the iconic Daytona International Speedway road course.
This year’s IMSA WeatherTech SportsCar Championship opener Jan. 30-31 will feature newly crowned NASCAR Cup Series champion Chase Elliott, seven-time NASCAR champion Jimmie Johnson, 2018 Daytona 500 winner Austin Dillon and Cup and Xfinity series regular AJ Allmendinger among a long list of internationally acclaimed drivers filling the 50-car grid.
All four drivers have joined top-tier teams with a legitimate shot at earning a new Rolex watch, and equally as importantly, they stand to gain a huge sense of career achievement should they win this 24-hour race competing against a broad array of the world’s top drivers from many motorsport disciplines.
And while the Rolex 24 has a notable history of NASCAR driver participation, it may surprise even the most avid race fan that it wasn’t until 2006 that a fulltime NASCAR Cup Series competitor – Casey Mears – was part of the overall winning team. Since then, only four other active NASCAR Cup Series drivers – Juan Pablo Montoya (2007, 08, ’13), Allmendinger (2012), Kyle Larson (2015) and Jamie McMurray (2015) – have been a part of overall winners.
Four-time NASCAR champion and NASCAR Hall of Famer Jeff Gordon won in 2017 after retiring from stock car competition.
“As far as being aware that I might be the first fulltime guy to win was actually on my mind that whole time,” acknowledged Mears, who teamed with Indy 500 winners Scott Dixon and the late Dan Wheldon to win the 2006 Rolex 24 crown with Chip Ganassi Racing.
“Not so much during the race, but when we knew we were going down there and preparing. The previous years, Tony Stewart had tried to do it and Jimmie Johnson before me and that was always the talk then that if one of those guys won, they’d be the first full-time NASCAR guy to ever do it. It was on my mind throughout the whole time we ran, and so it was a pretty big honor to do it and to do it with the guys I was able to do it with.”
Mears remembers fondly the reaction and handshakes he received a couple weeks later in the NASCAR garage during Daytona Speedweeks. There was wide acknowledgement of his Rolex 24 accomplishment.
“It was really cool that before even going to Daytona for the Cup Series stuff, to be able to start the year off with a win already,” Mears said. “It was a lot of fun in the garage and doing the media stuff prior. It was pretty cool and there were definitely a lot of other drivers giving me congratulations, which I appreciated.
“I remember Tony Stewart congratulated me but kind of gave me a little bit of crap, teasing me because he had been after that win for a couple years. It is definitely a cool one to have.”
That pride – and, of course, the Rolex timepiece that winners in each class receive – are rare and highly valued treasures.
Seven-time NASCAR Cup Series champion Dale Earnhardt and his son, two-time Daytona 500 winner Dale Earnhardt Jr., nearly won the GT class Rolex 24 title in 2001, finishing on the podium. Earnhardt Jr. later teamed with three-time NASCAR Cup Series champion Stewart, who has five Rolex 24 starts and a best finish of third place in 2005.
McMurray, who has competed in eight Rolex 24s, says the NASCAR paddock’s interest really increased as the emphasis on NASCAR’s own road course racing intensified.
“NASCAR drivers just weren’t thought of as road racers. Only a very few people had embraced that style of racing like Ricky Rudd and Ernie Irvan,” said McMurray, noting that top-10 finishes on road courses were considered achievements in the early decades of NASCAR racing.
“When you had (IMSA stars) Ron Fellows or Boris Said show up (at NASCAR road races), they’d be significantly faster. They never won a Cup race but when they showed up, they’d be significantly faster than everybody.
“I think around 2003, 2004, all of sudden teams started putting a lot more effort into their road course programs and all of the road racers like Boris and Ron were sharing a lot of information with teams and doing development They were getting everybody’s cars better.
“Then there wasn’t as big a difference in speed between the ‘road course ringers’ and the typical NASCAR guy, and I think that then opened up a lot of NASCAR people’s eyes to go and participate in the Rolex 24 Hour race.”
And, McMurray noted, “the fact NASCAR people did well (in the Rolex 24), like Casey Mears, gave them more opportunities.”
It certainly has led to more determined drives. The Rolex 24 trophy and watch hard-earned by race winners are legitimately time-honored marks on any driver’s resume.
McMurray, who won seven NASCAR Cup Series races, said he keeps his Rolex 24 trophy alongside his most cherished stock car trophies, including the 2010 Daytona 500, 2010 Brickyard 400 and 2010 NASCAR All-Star hardware.
“It’s super special,” McMurray says of the Rolex 24 achievement. “If you asked people about my driving career, they’d say I didn’t win a ton of races, but all of them I won were really big events. And the Rolex is one of them.
“The Rolex is one of those races I’ll never forget.”
The Roar Before the Rolex 24 test sessions to prepare for the Rolex 24 continue through Sunday, concluding with the Motul Pole Award 100 qualifying race on Sunday. Rolex 24 At Daytona action starts Jan. 27, with the 24-hour race beginning at 3:40 p.m. ET Saturday, Jan. 30. Live race-day coverage starts on NBC at 3:30 p.m.