NEWYou can now listen to Fox News articles! NASCAR’s Daytona 500 came down to the wire on Sunday, and it was Austin Cindric who edged out Bubba Wallace and Ryan Blaney on the front straightaway to secure the victory.Cindric appeared on “Fox & Friends” on the Fox News Channel on Monday morning. He talked to… 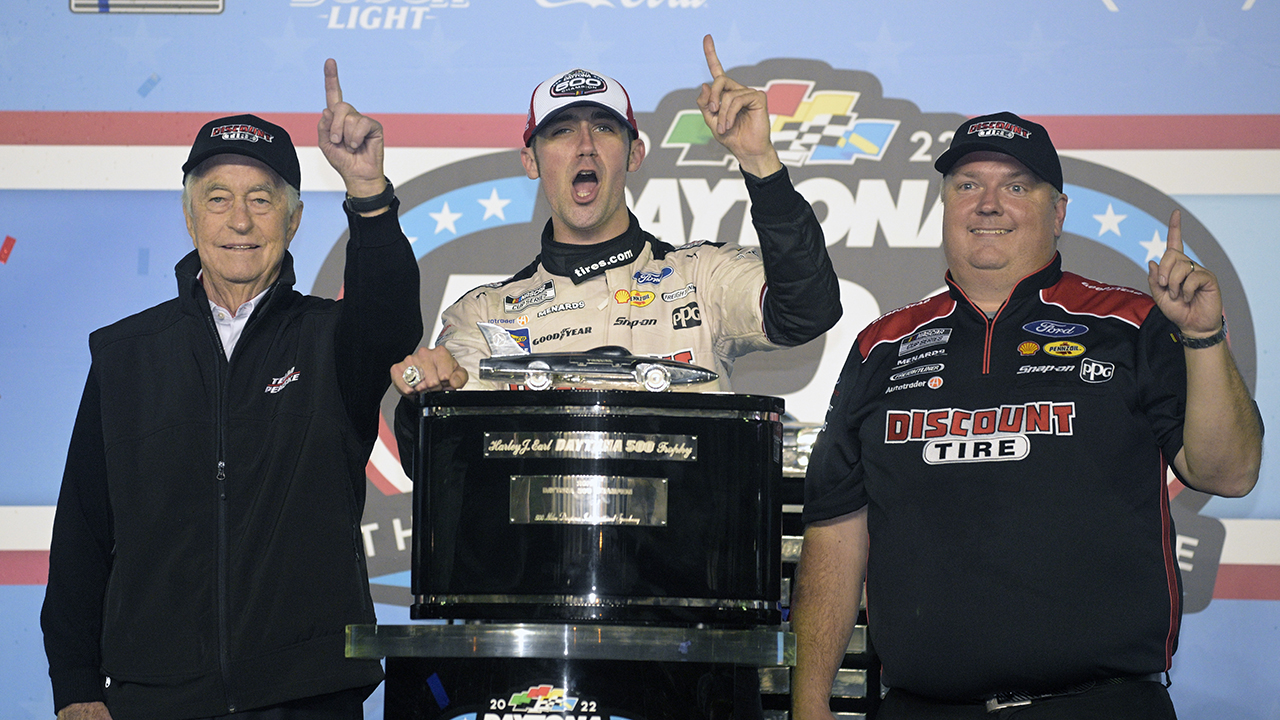 NEWYou can now listen to Fox News articles!
NASCAR’s Daytona 500 came down to the wire on Sunday, and it was Austin Cindric who edged out Bubba Wallace and Ryan Blaney on the front straightaway to secure the victory.Cindric appeared on “Fox & Friends” on the Fox News Channel on Monday morning. He talked to co-anchors Steve Doocy, Rachel Camps-Duffy and Lawrence Jones about his win.CLICK HERE FOR MORE SPORTS COVERAGE ON FOXNEWS.COM
Bubba Wallace (23) bumps into Austin Cindric (2) as the approach the finish line during the NASCAR Daytona 500 auto race Sunday, Feb. 20, 2022, at Daytona International Speedway in Daytona Beach, Florida. Cindric won the race.
(AP Photo/Chris O’Meara)”Certainly a pretty intense moment they’re racing for the win of the Daytona 500, it’s the one that everybody wants to win,” Cindric said of the narrow victory. “It’s one that everybody wants to win, and Bubba has been able to put himself into position a lot of years in a row now. Just try to position myself to where I can be close enough to still make those blocks and still make those moves to be at the lead at the start-finish line.”We did have a red flag – a stopped period for clean-up for one of the crashes. Definitely a good time to reflect on what I’m going to have to do if I find myself in that position, restarting on the front row of the biggest race of the season. But you gotta keep your head in the game, and what an incredible opportunity to be able to do it in front of a sellout crowd.”
Austin Cindric, center, celebrates in Victory Lane with car owner Roger Penske, left, and crew chief Jeremy Bullins after winning the NASCAR Daytona 500 auto race at Daytona International Speedway, Sunday, Feb. 20, 2022, in Daytona Beach, Florida.
(AP Photo/Phelan M. Ebenhack)FOX NATION-SPONSORED CAR RACES INTO THE TOP 15 AT DAYTONA 500Cindric was one lap away from becoming a back-to-back champion on the XFINITY circuit last year. He was asked whether the Daytona 500 win makes up for last year’s close season-ending defeat.”I’ve had the last three months to reflect on being a loser,” Cindric said with a laugh. “I’m a winner today. So, I’ll take it. And it, and it doesn’t change that. We love the fact that able to rebound like that. But you know, that’s what the sport’s all about. That’s what racing is all about, is how you can rebound. For me, it’s everything I dream of is to come to speed weeks in and to be able to win the Daytona 500, the biggest race of the year, the biggest race of them all. It’s just it’s hard to believe, hard to put into words.”
Austin Cindric, driver of the #2 Discount Tire Ford, is congratulated by Bubba Wallace, driver of the #23 McDonald’s Toyota, in victory lane after winning the NASCAR Cup Series 64th Annual Daytona 500 at Daytona International Speedway on Feb. 20, 2022, in Daytona Beach, Florida.
(James Gilbert/Getty Images)CLICK HERE TO GET THE FOX NEWS APPNext on the docket for Cindric is the Wise Power 400 at Auto Club Speedway in Fontana, California.
Read More