NASCAR at Talladega betting: Bubba Wallace is one of the four favorites at +1100

There are no clear favorites entering Sunday’s race at Talladega.The race (3 p.m. ET, Fox) is the first at Talladega with the new Cup Series car. The season-opening Daytona 500 gave us a preview of what the car could likely race like at Talladega and the odds for the race are heavily influenced by the… 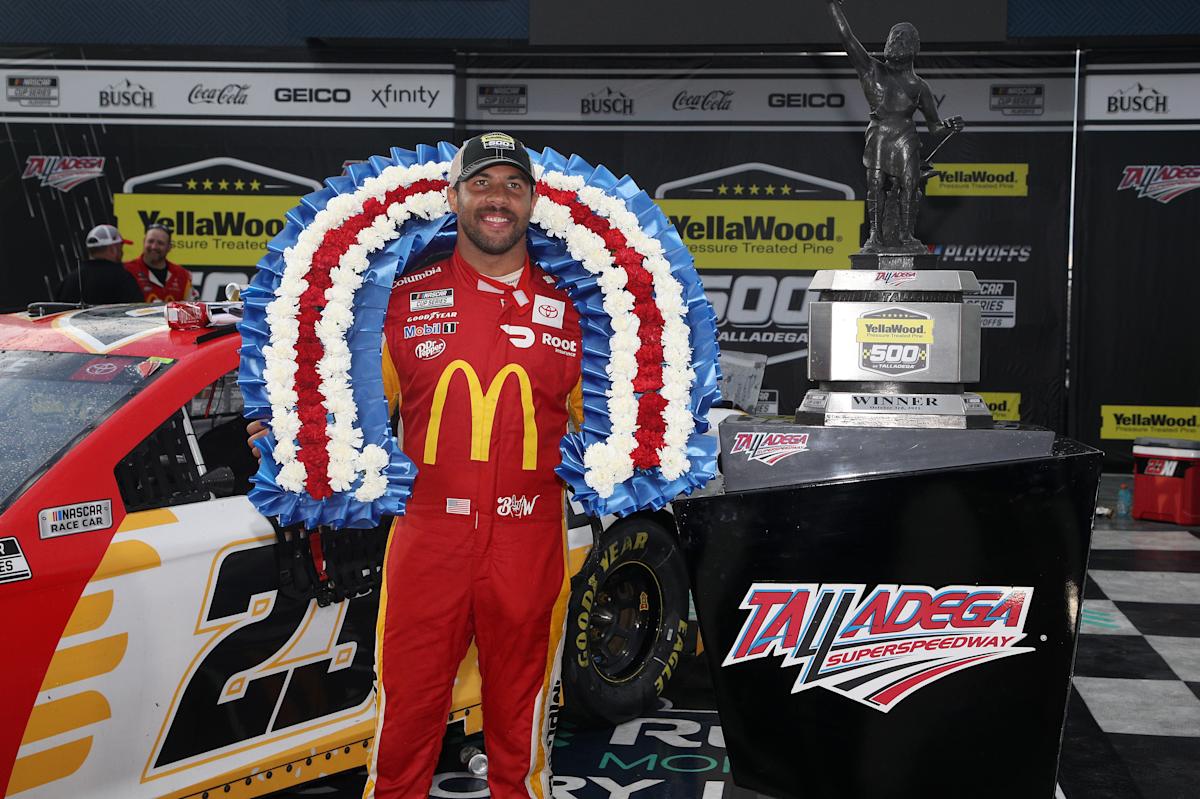 There are no clear favorites entering Sunday’s race at Talladega.The race (3 p.m. ET, Fox) is the first at Talladega with the new Cup Series car. The season-opening Daytona 500 gave us a preview of what the car could likely race like at Talladega and the odds for the race are heavily influenced by the 500.Daytona winner Austin Cindric is the No. 5 BetMGM favorite at +1400. Cindric’s win came in his eighth Cup Series start and he led 21 of the race’s 201 laps as Team Penske appeared to have the best cars over the course of the Daytona weekend.That’s reflected in the odds as well. Cindric’s two teammates are ahead of him at +1100. Ryan Blaney finished fourth at Daytona after leading 36 laps and two of his seven Cup Series wins have come at Talladega. Joey Logano also has the same odds as Blaney. He’s got two Talladega wins too.Logano and Blaney are tied for favorite status with Bubba Wallace and Denny Hamlin and Wallace is listed atop the board.TALLADEGA, ALABAMA – OCTOBER 04: Bubba Wallace, driver of the #23 McDonald’s Toyota, celebrates in the Ruoff Mortgage victory lane after winning the rain-shortened NASCAR Cup Series YellaWood 500 at Talladega Superspeedway on October 04, 2021 in Talladega, Alabama. (Photo by Sean Gardner/Getty Images)Wallace has nominal status as the favorite after he got his first Cup Series win in last fall’s rain-shortened Talladega race. He also finished second to Cindric with a damaged car in the Daytona 500. Those finishes coupled with his popularity make it clear why he’s at the top of the board.This is a board that’s a lot more crowded than it typically is as well. Eighteen drivers are between +1100 and +2500. That’s almost half the field as 39 cars are set to start the race.Here’s what you need to know if you want to go hog wild and bet on Sunday’s race. As always, our Talladega advice is to place a lot of small-dollar bets on drivers across the board. Don’t invest too much in one driver simply because you don’t know when a crash is going to strike.The favoritesBubba Wallace (+1100)Denny Hamlin (+1100)Joey Logano (+1100)Ryan Blaney (+1100)Austin Cindric (+1400)Chase Briscoe (+1400)Chase Elliott (+1400)Brad Keselowski (+1400)Told you this board is crowded. Eight drivers occupy this space and there are five more drivers at +1800. Wallace’s favorite status may be obvious based on recent history but it’s also only based on recent history. His Talladega win was his first top-10 finish in eight starts at the track.His team co-owner Hamlin has two wins and 14 top-10 finishes in 32 Talladega starts. Briscoe was third at Daytona earlier this year and finished 11th and 14th in his two Talladega starts a season ago. Elliott has a win and four top-five finishes in 12 Talladega starts. Keselowski is the active wins leader at Talladega with six and has finished in the top two in each of his last two starts at the track. But Sunday is also his first Talladega race as a member of Roush Fenway Keselowski Racing.Good mid-tier valueRoss Chastain (+3300)Martin Truex Jr. (+3300)Chastain finished last at Daytona thanks to a crash and has never finished in the top 10 at Talladega in six starts. But his aggressiveness could play well — or poorly — on Sunday and he should have a fast car. Truex has been miserable at Talladega lately; he hasn’t scored a top 10 since 2015. But that’s a product of bad luck and that bad luck has to turn around at some point, right?Don’t bet this driverKevin Harvick (+1800)Harvick has finished fourth and eighth in his last two Talladega starts and hasn’t finished outside the top 20 since he was 38th in the spring of 2019. But Harvick hasn’t won at Talladega since 2010 and we’d be surprised if he was in victory lane on Sunday. We’d feel better about a Harvick bet if he had longer odds.Looking for a long shot?Erik Jones (+6600)Jones has four top-10 finishes and five DNFs in 10 Talladega starts. That’s a boom-or-bust profile. He was ninth in the fall and had a fast car at Daytona before he was taken out in a late crash.
Read More