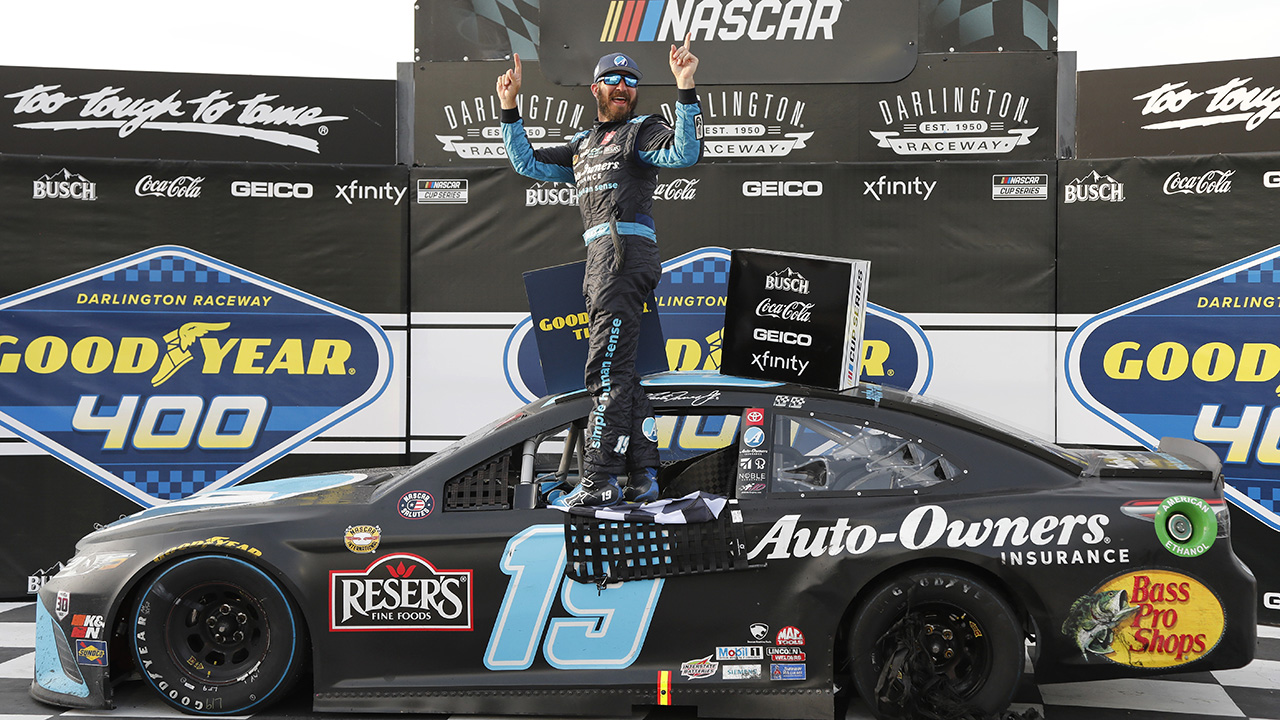 NASCAR NextGen Cup Series cars revealedNASCAR Sr. V.P. of Racing Innovation John Probst joins Fox News Autos Editor Gary Gastelu in The Fox Garage to talk about the NASCAR NextGen Cup Series car that’s set to debut at Daytona next February.Martin Truex Jr. got nervous in a hurry near the end of his dominating drive at Darlington Raceway.Barely pushed much of the race, the Joe Gibbs Racing driver suddenly saw Kyle Larson catching up in the closing laps.
Martin Truex Jr. celebrates winning the NASCAR Cup Series Race at Darlington
(AP)Truex, though, called on his steady demeanor and track focus to pull away for his third NASCAR Cup Series victory this season.Not that it was easy.When Truex noticed Larson right behind him inside of 30 laps left, he thought, “Oh, man, he’s right behind me.”You’re heart rate goes up,” he continued, “You’re anxiety goes up.”Very quickly, Truex was back to his steady, powerhouse driving at the track “Too Tough To Tame.””Hopefully, we can keep this rolling,” Truex said.Truex’s owner, Joe Gibbs, told him after that Larson gave the three-time Super Bowl winning coach a scare. “Yeah, he scared me, too,” Truex told him.The victory gave Truex some payback at Darlington from the last time here last September, when he led 196 laps, yet finished 22nd after tangling for the lead late with Chase Elliott.This time, Truex made sure he had no issues by running out front — often holding a 10-second lead on the field — to win for the second time at the track “Too Tough To Tame.”SEE IT: NASCAR NEXT GENERATION CUP SERIES CARS REVEALEDTruex led 248 of the 293 laps for his 30th career victory in NASCAR’s top series. He’s the only driver with multiple wins over the year’s first 12 races.”It’s fun when you’re out front,” Truex said. “You’re always just mindful on staying focused on what you’re doing.”No one was more focused at Darlington than Truex.He took control midway through the first of three stages, moving in front on a restart and settling in for a long ride up front. Truex led the final 21 laps to take the first stage, then the last 36 as he collected the second stage win by some 14 seconds over his JGR teammate Kyle Busch.CLICK HERE TO GET THE FOX NEWS APPTruex broke out when racing resumed for the final stage and easily managed a couple of rounds of green-flag pits stops to stay ahead.Larson was second with Truex’s teammate, Kyle Busch, third. William Byron was fourth and Denny Hamlin, who came in as the NASCAR points’ leader, was fifth.Larson charged hard to catch up, even using a dramatic sliding pass between Ryan Newman and Tyler Reddick to keep chasing the lead.”Glad I didn’t wreck there,” Larson said with a smile.WHO’S HOTKyle Busch followed up his first win of the season at Kansas last week with a solid third place at Darlington. It was Busch’s sixth top 10 finish in his last seven races here. Busch’s lone victory at Darlington came in 2008.WHO’S NOTKurt Busch seemed like he was headed for big things at Darlington when he gave the track one of most iconic moments, finishing second here in 2003 to Ricky Craven in a side-by-side duel where he lost by 0.002 seconds. But Busch hasn’t come that close to a Darlington victory in 22 races since. His latest start ended in flames after he hit the inside wall and the liquid his car spewed caught on fire. “It’s been a rough year and this just adds to it,” said the Chip Ganassi Racing driver, who was unhurt in the incident.HEY, ISN’T THAT …?There were a handful of NASCAR guests and fans allowed to roam the garage area, the first time that’s been allowed in the sport since the coronavirus shut down stock-car racing in March 2020. Kevin Harvick won at Darlington last May without fans in the facility last May. There were about 8,000 or so fans in the stands. There were about double that amount here Sunday and Darlington officials said they’ll open the grandstands to all who want to come for the Southern 500 on Sept. 5.UP NEXTNASCAR heads to Dover International Speedway for another triple-header weekend where the Camping World Truck Series and Xfinity Series will take place before the Cup Series race at the Monster Mile. Kevin Harvick won the Cup Series event there in 2020, part of his season best nine victories.
Read More