Kyle Larson is back in Victory Lane in the NASCAR Cup Series. In his fourth start with Hendrick Motorsports, Larson led a race-high 103 of 267 laps on his way to winning Sunday’s Cup race at Las Vegas Motor Speedway. It’s the second consecutive win for HMS, counting William Byron’s triumph last week at Homestead-Miami… 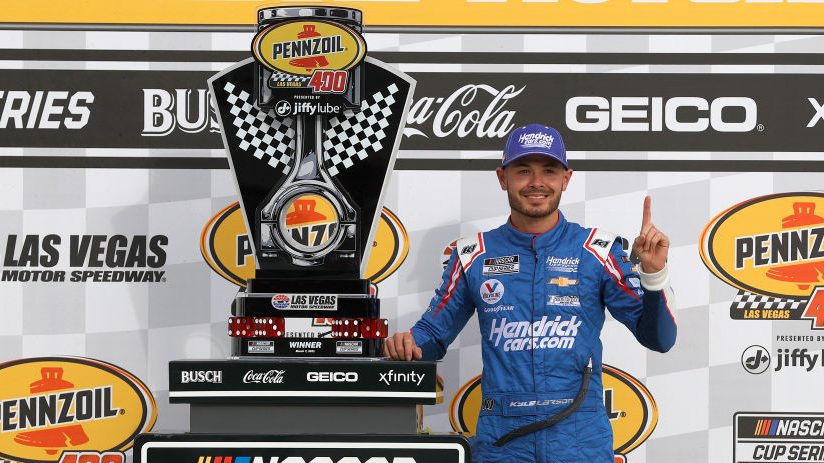 Kyle Larson is back in Victory Lane in the NASCAR Cup Series.
In his fourth start with Hendrick Motorsports, Larson led a race-high 103 of 267 laps on his way to winning Sunday’s Cup race at Las Vegas Motor Speedway.
It’s the second consecutive win for HMS, counting William Byron’s triumph last week at Homestead-Miami Speedway.
MORE: Las Vegas Cup race results
“It was such an awesome race car,” Larson told Fox Sports after the race. “(Crew chief) Cliff (Daniels) and everybody did a great job preparing this piece. It was so much fun to drive. I could go wherever I wanted to. I knew I had a really good car once we got single-filed out; drafting early in the run was tough.
“Thank you so much, (Rick Hendrick), Jeff Gordon, everybody at Hendrick Motorsports for the amazing opportunity I’ve been gifted. … This is definitely special.”
The win – Larson’s first since October 2019 at Dover International Speedway – marks a key point in his return to NASCAR.
Last April, he was fired by Chip Ganassi Racing and indefinitely suspended by NASCAR following his use of a racial slur in an e-sports event.
He missed the final 32 races of the 2020 Cup season as a result. But that October, Hendrick Motorsports announced Larson would join the organization and drive the No. 5 entry.  NASCAR’s suspension ended January 1.
Since the events of last year, Larson has strived to learn and reach out on diversity issues.
He has hired a diversity coach and continues to work with organizations such as the Philadelphia-based Urban Youth Racing School and the Sanneh Foundation, which supports low-income urban and immigrant youth populations in Minnesota’s Twin Cities. He recently launched the Kyle Larson Foundation. Its goal is to benefit youth, families and communities in need of support.
Brad Keselowski, Kyle Busch, Denny Hamlin, and Ryan Blaney completed the top five finishers on Sunday.
Keselowski told Fox Sports he was happy for Larson.
“I know he’s been through a lot over the last year,” Keselowski said. “He’s a good kid. I’ve known him for a little while, he’s got a good family, and I’m just happy to see him bounce back.”
Racing legend Mario Andretti also reacted to Larson’s win on social media:

Today @LVMotorSpeedway was probably the most entertaining @NASCAR race I ever watched as Kyle @KyleLarsonRacin drove the race of his life for his first Cup Win. O’l Rick knew what he was doing when he hired him. #RACER
— Mario Andretti (@MarioAndretti) March 7, 2021

STAGE 1 WINNER: Brad Keselowski
STAGE 2 WINNER: Kyle Larson
WHO HAD A GOOD RACE: A non-factor last week in Miami, Christopher Bell – already in the playoffs with a win on the Daytona road course – rebounded for a seventh-place finish. … Erik Jones finished 10th to pick up his first top 10 result with Richard Petty Motorsports.
WHO HAD A BAD RACE: A power steering issue cost Bubba Wallace multiple laps early on and relegated him to a 28th-place finish. … Aric Almirola (finished 38th) suffered a left-front tire failure and crashed out on Lap 179. He’s now had three finishes of 30th or worse in the first four races this season.
NOTABLE: The Stage 2 winner has now won six of the past eight Las Vegas Cup races. Chase Elliott won Stage 2 in both of last year’s races, but lost out in the end to Joey Logano and Kurt Busch.
NEXT: The Cup Series returns to action Sunday, March 14 at Phoenix Raceway. Joey Logano won last spring at Phoenix. It was the last race run before NASCAR paused competition for two months due to the coronavirus pandemic.