AVONDALE, Ariz. — Kyle Larson won.That was the expected result of NASCAR’s season-ending championship race, right?Larson closed his comeback season in NASCAR with his first championship Sunday, as he capped his return from a nearly yearlong suspension with a title-winning victory at Phoenix Raceway.”I can’t believe it,” Larson said, his voice quivering. “I didn’t even… 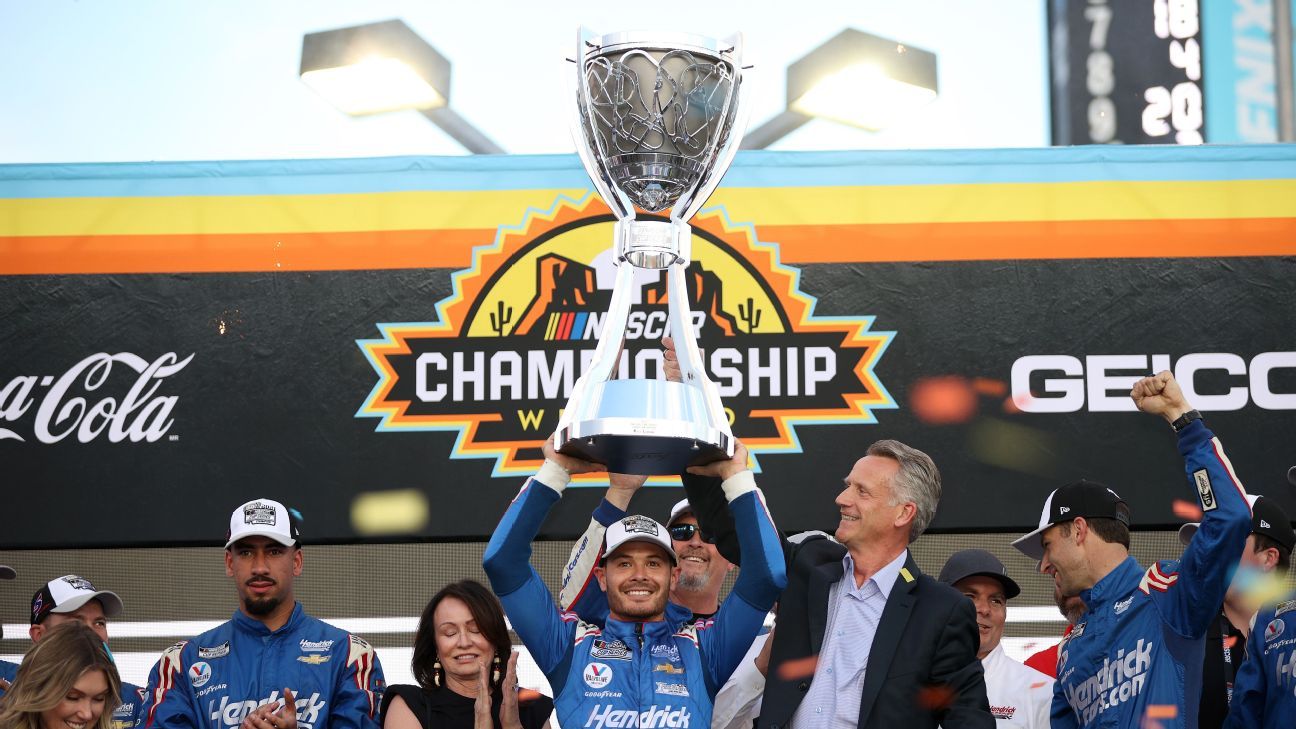 AVONDALE, Ariz. — Kyle Larson won.That was the expected result of NASCAR’s season-ending championship race, right?Larson closed his comeback season in NASCAR with his first championship Sunday, as he capped his return from a nearly yearlong suspension with a title-winning victory at Phoenix Raceway.”I can’t believe it,” Larson said, his voice quivering. “I didn’t even think I’d be racing a car a year and a half ago. To win a championship? Crazy!”Larson led seven times for a race-high 108 laps but was running fourth, last among the title contenders, as Martin Truex Jr. and Denny Hamlin controlled the championship late in a pair of Toyotas.6hRyan McGeeThen a caution reset everything.Because he won the pole Saturday in the qualifying, Larson had the first stall on pit road and the shortest sprint back onto the track of the four title contenders. He silently prayed for a flawless service call from his Hendrick Motorsports crew to get the No. 5 Chevrolet back on track ahead of his three title rivals.Wow, did the No. 5 team deliver.Larson’s crew performed its second-fastest stop of the season — a span that stretches 38 races — and Larson went from last among the final four to first.Larson controlled the restart with 25 laps remaining, quickly cleared Martin Truex Jr., then held off several of Truex’s challenges. There was no stopping Larson, just as he has been impossible to stop all season, and he drove off to his 10th Cup victory of the year.He beat Truex to the finish line by an easy .398 seconds.”There were so many points in this race where I did not think we were going to win,” Larson said. “Without my pit crew on that last stop, we would not be standing right here. They are the true winners of this race. They are true champions.”I’m just blessed to be a part of this group. Every single man or person, man and woman at Hendrick Motorsports, this win is for all of us, and every one of you. This is unbelievable. I’m speechless.”Truex, the 2017 champion, finished second and was followed by Denny Hamlin, his Joe Gibbs Racing teammate. Hamlin is 0-for-5 in championship finales and was the only driver among the final four contenders who did not lead a lap Sunday.Truex has finished second in the championship standings three times in the four seasons since his 2017 title.”Ultimately, we needed to beat him off pit road. It’s unfortunate, but we win and lose as a team,” Truex said. “That’s three times we’ve been second, and that sucks. Second hurts, I’m not going to lie, especially with the car we had and the job the guys did.”Kyle Larson gave Hendrick its 14th Cup title after winning the NASCAR Cup Series Championship at Phoenix Raceway. Photo by Chris Graythen/Getty ImagesHamlin, who raced Larson all season for the regular-season title that ultimately went to Larson, has firmly maintained that Larson should be the champion. But it didn’t soften the blow of another title defeat for the three-time Daytona 500 winner.”Any time you can win 10 races in a year, you’re absolutely a deserving champion,” Hamlin said. “They did a great job on the last pit stop and got him out there, and he just set sail after that. Proud of my team. … Just a really good year. A really, really good year, and things just didn’t pan out.”Chase Elliott, the reigning champion and NASCAR’s most popular driver, led 94 laps but finished fourth.”I was really proud of our group. I thought we brought a really good car. … Just didn’t work out,” Elliott said. “But look, proud of our team, a lot to build on, and also congrats to Kyle. … Very, very deserving champions, and glad to see Kyle have success.”When you’re a good driver and a good person and you surround yourself with good people, success is warranted. It’s good to see that.”Larson seemed to have tears in his eyes on his cooldown lap as he celebrated a career-defining moment he wasn’t sure would happen last year. He was fired four races into the season and lost nearly every sponsor for his use of a racial slur while racing online, and Larson retreated to his sprint car roots to rebuild his life.He volunteered for multiple different grassroots organizations as Larson went on a personal journey to learn more about himself, as well as social justice issues. It was Rick Hendrick who decided to give him another chance, and he hired Larson once NASCAR lifted his suspension.Larson watched last year’s championship race from the competition compound on the Hendrick Motorsports campus in North Carolina. A year later, he gave Hendrick its 14th Cup title.Larson won five of the 10 playoff races and tied Tony Stewart in 2011 for most wins in a single playoff season. He also broke Jeff Gordon’s 20-year record of most laps led in a single season. The 29-year-old from Elk Grove, California, joins Gordon, Kevin Harvick and Jimmie Johnson as champions from the Golden State.It was the 280th victory for Hendrick Motorsports, which moved past Petty Enterprises in May with Larson behind the wheel as NASCAR’s winningest team. The team has won 14 championships in 27 years.Cliff Daniels, who took over as crew chief for seven-time champion Johnson 22 races in the 2019 season, won his first championship. Daniels spent 58 races running the No. 48 team for Johnson, and they closed their run together with a fifth-place finish in last year’s season finale as Johnson crossed the finish line behind the four title contenders.Daniels and his crew welcomed in Larson the next week, won 10 points races and the $1 million All-Star race, and now the Cup title.The win by Larson halted Toyota’s bid to sweep championship weekend. Toyota drivers won the Truck and Xfinity Series titles to open the weekend, but Larson gave Chevrolet the biggest trophy of them all.Chevrolet had already clinched the manufacturer’s titles in Cup and Xfinity before the weekend.