9:30 PM ETAssociated Press DAYTONA BEACH, Fla. — Kyle Busch snagged the first win of the new season, streaking past NASCAR champion Chase Elliott after Elliott spun leader Ryan Blaney in the final stretch of the exhibition Busch Clash.Blaney had chased down Elliott on the road course at Daytona International Speedway to take the lead… 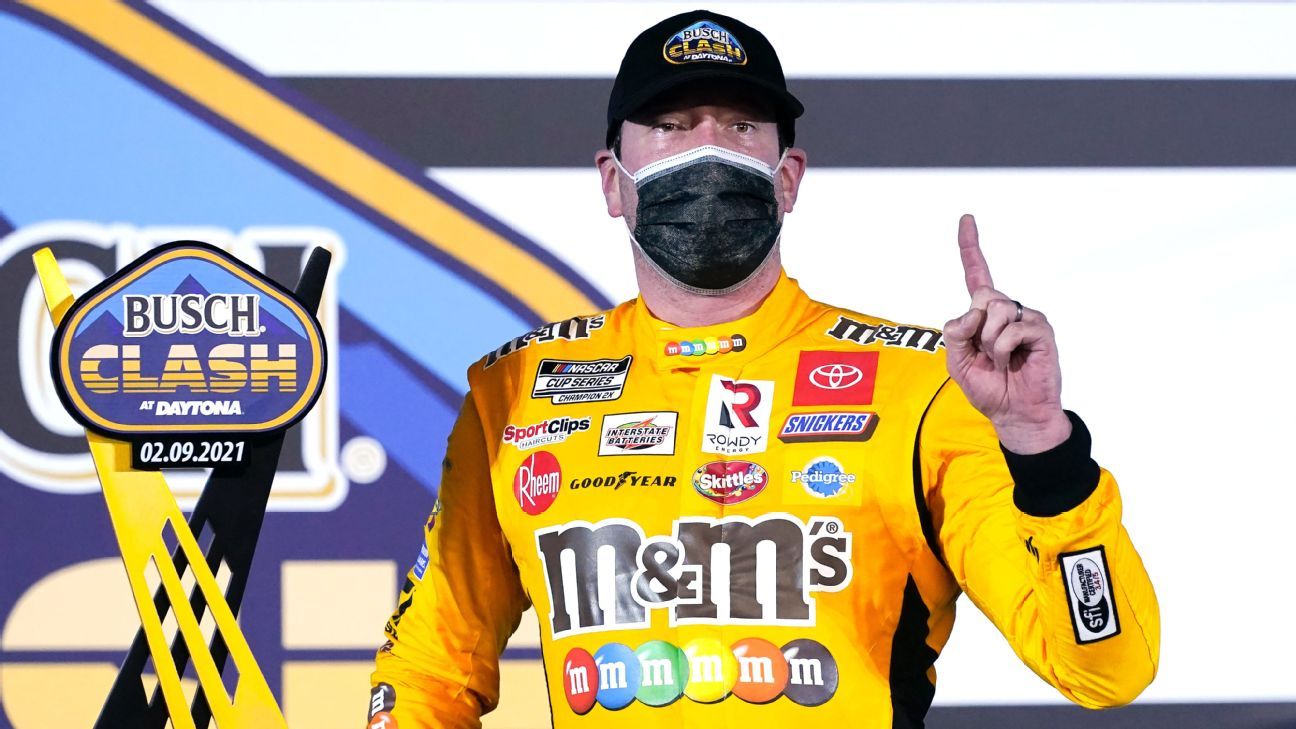 9:30 PM ETAssociated Press DAYTONA BEACH, Fla. — Kyle Busch snagged the first win of the new season, streaking past NASCAR champion Chase Elliott after Elliott spun leader Ryan Blaney in the final stretch of the exhibition Busch Clash.Blaney had chased down Elliott on the road course at Daytona International Speedway to take the lead with two laps remaining in Tuesday night’s 35-lap Speedweeks opener. Elliott, winner of NASCAR’s last four road course races dating to 2019, didn’t let Blaney pull away and set himself up for one final chance at the win.He stalked Blaney into the chicane headed into the Turn 4 final push, and as Elliott closed in on his bumper, the two made contact and Blaney spun into the wall. It cost Elliott his momentum and Busch sailed by for the surprise victory.”I just knew to keep my head down and keep focus ahead and just seeing if I could hit my marks to have a shot like that if something like that were to materialize,” Busch said.Busch led only the final 300 or so feet of the race for the victory for Joe Gibbs Racing. It comes after a disappointing one-win season for the 2019 NASCAR champion. The lack of success led to an offseason shakeup with his No. 18 Toyota team.For Busch, the win comes after a disappointing one-win season for the 2019 NASCAR champion. He struggled in the second half of the season, failed to advance to the final four championship round for the first time since 2014 and his No. 18 Toyota crew was overhauled during the winter.Gibbs made so many changes to Busch’s crew, he joked he felt like he’d been the one fired and moved to a new ride.”I’m not sure that we’re mature enough or we’re ready enough in order to win as a group, but I feel like this is a good start,” Busch said. “Winning never hurts anything, but there is some stuff for us to get a little bit better on, for us to grow on.”Elliott finished second and Blaney was third. The two are close friends off the track and chatted at Blaney’s damaged race car after the finish.”If I’m sorry for trying to win a race, then I’m in the wrong business,” Elliott said. “Obviously, I don’t mean to wreck anybody. I feel like you’ve got to go for it at an event like this.”Blaney chalked it up to hard racing in the first event since November’s season finale.”Of course he didn’t mean to wreck me, but I ended up wrecked,” Blaney said. “I told him, ‘If you are going to make a move like that, you better make sure you win the race and don’t let the third-place guy win.'”The Clash has always been the opening event of Speedweeks, which traditionally spans two weekends before the season-opening Daytona 500. NASCAR this year is experimenting with a condensed schedule and all the racing spans six days and concludes with Sunday’s big show.This year’s running was the first time on Daytona’s road course, a plan announced before the 2020 season began. NASCAR moved from the traditional oval to answer fans’ calls for more variety on the schedule, and figured it would be a final race in the current car before the Next Gen model was introduced.But the Next Gen has been delayed until 2022 because of the pandemic, and NASCAR used the Daytona road course in August last year for a points-paying race when it had to alter the schedule to complete the season. Elliott won the inaugural Daytona road course race.The Clash was much smoother than last year’s race on Daytona’s oval, a crash-fest in which every single car was in at least one incident and only six cars were running at the end. The race also had 12 lead changes, one less than August’s race here that had 30 additional laps.NASCAR will run the road course again on Feb. 21 in a points-paying event. The race was moved to Daytona because of pandemic restrictions in California, where NASCAR was scheduled to race at Fontana.

NASCAR Power Rankings: Who is No. 1?
Bubba Wallace tops first Daytona 500 practice in first laps with No. 23 Toyota