Johnson Finds No Time to Relax in NASCAR ‘Retirement’

Seven-Time Cup Champion Busier Than Ever in Offseason By Holly Cain DAYTONA BEACH, Fla. – NASCAR champion Jimmie Johnson showed up at Daytona International Speedway on Friday morning for the Roar Before the Rolex 24 feeling more like he was in mid-season form than climbing behind the wheel for the annual season start-up session most… 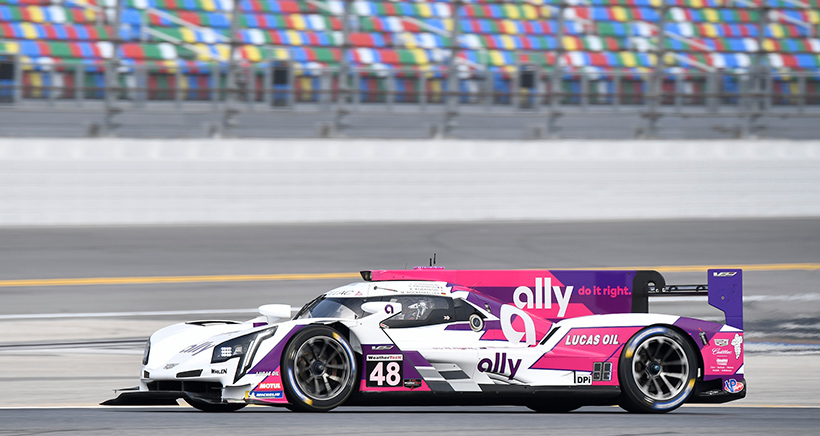 Seven-Time Cup Champion Busier Than Ever in Offseason
By Holly Cain
DAYTONA BEACH, Fla. – NASCAR champion Jimmie Johnson showed up at Daytona International Speedway on Friday morning for the Roar Before the Rolex 24 feeling more like he was in mid-season form than climbing behind the wheel for the annual season start-up session most racers use to brush off the dust.
That’s because since Johnson completed his final NASCAR full-time season in November, the stock car champ has spent the last months testing IndyCars around the country – from famed tracks in Laguna Seca, California, to Sebring, Florida – preparing for his inaugural season in the NTT IndyCar Series driving road course events for Chip Ganassi Racing.
This week, however, Johnson is preparing to make his first start in the IMSA WeatherTech SportsCar Championship Rolex 24 At Daytona in a decade – sharing driving duties of the No. 48 Ally Cadillac Racing Cadillac DPi with Indy 500 champion Simon Pagenaud, two-time Rolex 24 winner Kamui Kobayashi and veteran sports car ace Mike Rockenfeller.
“I would say this has been the busiest offseason I’ve ever had,” Johnson said with a laugh. “I was in an IndyCar immediately following the season finale for NASCAR. The IndyCar team and this prototype, there’s sim (sessions) for IndyCar and prototype, seats to be fit for all three cars and learning crew members, teams, systems, meetings. It is by far the busiest winter.
“(My wife) Chandi and I joke all the time, here we thought I was slowing down and it’s been way busier than I’ve ever experienced for a standard November to January.”
The last time Johnson competed in the Rolex 24 race was 2011, co-driving with Alex Gurney and Jon Fogarty. He has seven total starts in the famous twice around-the-clock event, with a best showing of runner-up in 2005 and 2008.
Kobayashi put the team car on top of the speed chart in Friday’s opening Roar practice. Johnson will co-drive the car with the Japanese FIA World Endurance Championship star in Sunday’s Motul Pole Award 100, the qualifying race to set the field for the Jan. 30-31 Rolex 24. Johnson was tabbed to drive the No. 48 Cadillac in the qualifying session for the Motul Pole Award 100 and will start Sunday’s race from fifth on the grid.
A familiar face will be on the pit box for Johnson. Chad Knaus, crew chief on Johnson’s seven NASCAR Cup Series title runs, has signed on to help Action Express Racing on the engineering side of this Rolex 24 effort. Several Hendrick Motorsports crew members will be helping out in the pits as well.
“We do have some Hendrick Motorsports guys sprinkled throughout and it’s been great to work with them,” Johnson said. “(Chad’s) been involved. I just left the transporter where my teammates and I were getting into the driver data, and Chad’s on the computer helping us find our way through and find the right settings to look at, so he’d definitely ingrained with the team.
“It’s awesome. There’s nothing weird about it and it’s very meaningful to me and I know it is to him, to be back working together. It’s been awesome and I’m really, really excited about it.”


Back for Full Season, Pfaff Motorsport Driven to Challenge in GTD

By John Oreovicz
Pfaff Motorsports has seen a lot in more than 50 years of participation in auto racing. The Toronto-based team was still taken by surprise by what unfolded in 2020.
After a difficult run to 13th place in GT Daytona class (GTD) at the season-opening Rolex 24 At Daytona last January, Pfaff was essentially parked for the rest of 2020 by COVID-19 and strict Canadian border crossing restrictions.
About 85 percent of Pfaff’s personnel is based in Canada. It wasn’t until travel rules were slightly relaxed that the team was able to rejoin the IMSA WeatherTech SportsCar Championship in October for the Motul Petit Le Mans at Michelin Raceway Road Atlanta. Zacharie Robichon led a strong performance that netted the No. 9 “Plaid” Porsche 911 GT3 R a top-five class finish.
Robichon, a 28-year-old Ottawa native, returns to Pfaff for his third year with the organization. More importantly, Pfaff Motorsports is committed for the full 2021 WeatherTech Championship, with long-time factory Porsche driver Laurens Vanthoor joining the effort.
The 29-year-old Belgian claimed five IMSA GT Le Mans (GTLM) wins for the Porsche GT Team from 2017-20, as well as the 2019 GTLM championship. Vanthoor also shared the winning GTE Pro Porsche in the 2018 24 Hours of Le Mans.
The reinvigorated effort puts Pfaff in position to contend for the WeatherTech Championship GTD title.
“Last year was, for myself, for the team, and for a lot of people in general, a very difficult year,” Robichon said. “When the season resumed (in July after a five-month hiatus), unfortunately we weren’t able to rejoin. I admit I didn’t watch the first few races because I was frustrated that we weren’t there. But I think overall it was the right decision, given the situation at home and with our team.
“Going into 2021, I can’t say enough how lucky I feel to be able to compete again,” he added. “We lost a lot of time, but the motivation to be back will bring us together. We’ll make that last year go away and pick back up where we started.”
Full-time drivers Robichon and Vanthoor will be augmented at this year’s Rolex 24 by a pair of factory Porsche drivers: Australian Matt Campbell and German Lars Kern.
The Pfaff Porsche has shown steady improvement at the Roar Before the Rolex 24, placing eighth, fifth and second in class in the three test sessions before Robichon qualified sixth in GTD for Sunday’s Motul Pole Award 100 qualifying race. Vanthoor clocked the car’s best lap at 1 minute, 46.805 seconds (119.994 mph) in the test sessions, showing he is adapting quickly from the GTLM Porsche to the GTD Porsche.
“For sure it was an adaptation,” Vanthoor said. “I’m here learning new people, new teammates, a new or slightly different car. But I heard good things about the Pfaff team and about Zach. I definitely think we have a very good environment where we can fight for a championship. That’s definitely the target.
“We’re still learning each other as we go on,” he concluded. “But that’s what the Roar Before the 24 is for, so we can prepare for next week.”
Canadian regulations require visitors to the United States to quarantine for two weeks upon return to their home country. Robichon and the Pfaff team believe they will be able to work around that logistical challenge but remain flexible.
“It doesn’t look like that (the quarantine regulation) is going to change, but we’ve taken the steps necessary to accommodate it,” Robichon said. “The travel restrictions can change every day, but we will adapt as required.
“If there’s anything that anybody has learned from this last year, it’s don’t try to predict what is going to happen,” he added. “Because you’ll get it wrong. No point in trying to figure it out until it’s in place, then cross that bridge when you get there.”