In a way, it was fitting. Inarguably one of the greatest in the history of NASCAR, Jimmie Johnson closed his full-time racing career in front of a sparse crowd. Only 11,000 people were allowed in the grandstands that generally hold 45,000 at Phoenix Raceway. COVID-19 restrictions robbed Johnson — who is tied for the most… 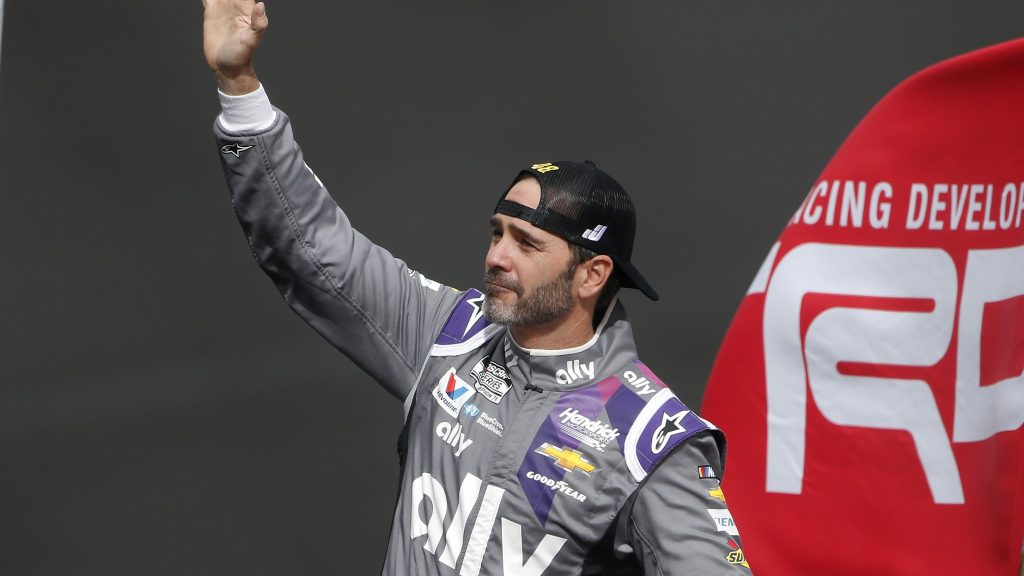 In a way, it was fitting. Inarguably one of the greatest in the history of NASCAR, Jimmie Johnson closed his full-time racing career in front of a sparse crowd. Only 11,000 people were allowed in the grandstands that generally hold 45,000 at Phoenix Raceway.
COVID-19 restrictions robbed Johnson — who is tied for the most Cup Series championships ever with seven — of a boisterous appreciation, as his farewell tour was muted throughout the year by the pandemic. But that only fits with the theme for Johnson, who many around the sport believe never got the admiration he deserved.
“To be honest with you, I have been sad about that for Jimmie because I’ve always felt that we never really appreciated Jimmie in the moment,” Dale Earnhardt Jr. said.
“He’s a living legend doing all those things right there in front of us, and I don’t think we ever really, as an industry, appreciated how good he was, what he did. Five championships in a row is just crazy.”
Johnson, 45, would never say so himself — he’s far too humble, and his peers will tell you that — but he deserved better. I’ve already weighed in on where the No. 48 Chevrolet driver belongs in the NASCAR GOAT debate. His stats already put him up there with 83 checkered flags, ranking him No. 6 on NASCAR’s all-time wins list.
“Jimmie Johnson is the greatest driver in my era, and my era started in 1972,” said NASCAR Hall of Famer Darrell Waltrip, who’s one spot above Johnson with 84 wins.
Comparing Johnson with the other two seven-time champions, Richard Petty and Dale Earnhardt Sr., Waltrip more or less separates Petty and Johnson into two different categories.
“I never thought I’d see anybody win seven championships again,” Waltrip continued. “Obviously, Earnhardt was great. [Jeff] Gordon’s great. [David] Pearson was there. There were other great drivers, but no one accomplished what Jimmie Johnson has done in that period of time.”
(Chris Trotman/Getty Images for NASCAR)
Waltrip is referring to Johnson’s unfathomable five consecutive championships from the 2006 to 2010 seasons. That’s a level of dominance NASCAR had never seen, and it’s unlikely another driver will ever match that mark — especially since NASCAR switched to a more traditional-style playoff format that creates added opportunity for upsets. Johnson also won the title in 2013 and 2016.
In any other year, Johnson’s retirement would have been a season-long celebration with packed grandstands cheering and showing their love for the seven-time champ during his last full season.
“It’s a shame,” said Tony Stewart, a three-time Cup Series champion who retired in 2016. “The accolades and the acknowledgement from the fans and tracks the last half of the season, I think that’s something that’s meant a lot to me, and I think it would mean a lot to him too. And unfortunately, [he’s] not going to get that.
“I feel like the biggest disappointment this year in motor sports is that we’ve got a seven-time champion that’s retiring [and] didn’t get what I feel like is a proper, fitting sendoff for everything that he’s done in the sport.”
Of course, Johnson, his career and his family have been celebrated this year.

Before the coronavirus shut down sports in the U.S., his wife, Chandra, and his daughters, Genevieve and Lydia, waved the green flag in March at Auto Club Speedway, Johnson’s “home” southern California track. His father, Gary, gave the “start your engines” command a few weeks ago at Texas Motor Speedway, where Jimmie is the all-time winningest driver with seven victories.
Plenty of gifts were still given as well. And it seems like nearly every track named something after Johnson, like Homestead-Miami Speedway’s Turn 3 tunnel, which is now named Jimmie Johnson’s Southernmost Tunnel.

We are honored to present the seven-time @NASCAR Cup Series champion, @JimmieJohnson with the renaming of our Turn 3 tunnel.
Jimmie Johnson’s Southernmost Tunnel is the southernmost tunnel in the continental US! pic.twitter.com/qW8tEDyT4y
— Homestead-Miami Speedway (@HomesteadMiami) June 14, 2020

But the subdued celebrations throughout the season didn’t remotely resemble the massive tributes drivers like Dale Jr., Gordon or Stewart received during their final seasons before retirement.
Despite his loyal fan base and ample success, it’s clear that Johnson is underappreciated by huge swaths of NASCAR fans. They just didn’t latch onto him, and he was never voted most popular driver (though, that could still change for 2020).
Maybe it was because he’s from southern California, a long way from the heart of NASCAR country. Maybe it’s because he wasn’t a bully on the track, or an agitator. He was booed for winning too much and labeled boring and vanilla.
Petty and Earnhardt were admired for their steely reserve and the feeling that they’d run anybody off the track to win. Maybe Johnson, as I wrote last week, always seemed like a driver who felt lucky just to be able to race cars for a living — and then happened to win a lot.
Maybe all of the above.
Dale Jr., NASCAR’s 15-time most popular driver, said he felt apologetic over it because “the fans don’t embrace [Johnson] more in masses.”
“Always felt that way,” Earnhardt said. “And then this year, I thought, ‘Man, he’s finally going to feel that love and appreciation from stop to stop along the tour.’ And it didn’t happen.”
Jimmie Johnson and Richard Petty in 2016. (Matthew O’Haren-USA TODAY Sports)
And inexplicably, it feels like Johnson is an afterthought among champions.
“When they say, ‘Seven-time champion,’ they say, ‘Dale Earnhardt and Richard Petty.’ And then they’re like, ‘Oh, and Jimmie Johnson.’ It’s like what?” Bubba Wallace said at the beginning of the season. “I guess that’s just Jimmie’s persona. He’s cool, calm and collected and under the radar.”
Stewart agrees, calling Johnson “one of the most underappreciated NASCAR champions that we’ve ever seen.” He’s baffled by it and believes Johnson doesn’t get nearly enough credit.
So it goes and has gone for Johnson. Maybe fans’ appreciations for him will grow now that he’s retired from full-time racing and will be missing from NASCAR in 2021.
“All I guess we can do is hope that he feels that appreciation,” Dale Jr. said.
“We’ll try to do a really good job of making sure he understands his impact on the sport. But I don’t know how you make a guy understand that anyways because it’s been so profound.”