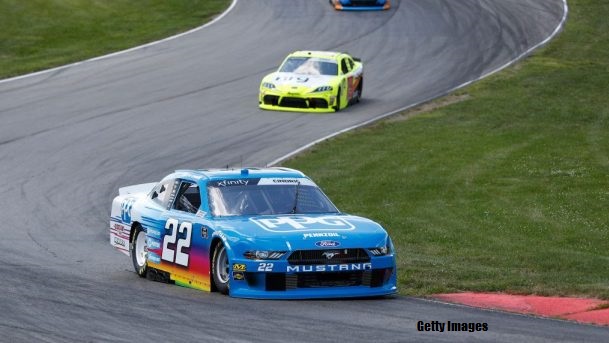 Ya know some weeks you just get a wild hair up your ass. Apparently, this is one of those weeks for me so lets take that shit and run with it. Fresh off a write-up of fading Tom Brady, yes the GOAT, Ill be fading arguably the one of the best road course racer in the last decade in any vehicle this week. That’s right, the fade of the noise and the chalk….NO ALLMENDINGER! Crazy, dumb, mildly slow in the head who really knows how to describe it all I know is that big plays = big monies and this is one of the biggest. I see Allmendinger over 65% owned and possibly more. The only thing that may keep his ownership down is the 22 starting spot. But if you play Xfinity DFS you know when it comes to a road courses everyone loves to auto click the Dinger.

Now, I am one of those few people that can sit for hours on end and watch old races until my eyes bleed and that is what I did this week. I dove deep, real deep. I watched least years Roval race and every road course race this year to come up with my analysis as well as used our SHEETZ to pick the player pool and core for this weeks racing.

Lets be real, it does sound like a terrible idea when you say it out loud and if you said it to anyone with half a brain they would laugh. Here are the facts: Allmendinger has been in every lobby winning road course lineup this year. He also has started beyond 30th in 2 of the 3 races. He has finished 4th, 2nd, and 4th respectively but the more important figures are his fantasy points of 68/78.3/50. He is averaging 5 fastest laps a race and just under 4 laps lead per race. If these all remain about the same I see him finishing with approximately 55 points. $11,500 is a steep price to pay for a ceiling of 65 points and a good chance at 55 overall. Ill pay down and get more value.

Austin Cindric – Along side Allmendinger, Cindric, could also throw his name in the hat for one of the best Xfinity road course racers at the moment. He will put up fastest laps and will lead laps. Cindra’s numbers are outstanding at these tracks and I expect the same results. Lets hope he does not lineup on front row with Briscoe leading because we know how Briscoe like to brake check starts to penalize the main competitor like he did at Indy.

Justin Allgaier – He can be fast at these track layouts but I have not seen it lately. I do not think he is worth the price tag. Ill pay down

Chase Briscoe – I could pretty much copy and paste Cindric section here. Briscoe is for real and he races to win. He has shown great speed at all of the previous tracks and has won at the ROVAL in his short career. He is a great core option.

Kaz Grala – Normally, I would say this is a must play and the reason being is because I watched him stripe ass at Daytona in Austin Dillon’s car while Dillon was out with “the flu.” Grala has road race experience and will be a top running car all day but unfortunately I cannot see him producing enough to make that $10,100 worth it.

Noah Gragson – He has shown some brief speed at road races including leading a few laps here and there but I will not be getting there this week. Starting P1, so much to lose and not enough to gain considering the steep level of road race competition in the field.

Ross Chastain – For those of you that don’t know and those of you that do, I am a Melon Man supporter. Raced against him in the Florida Fastruck series for a few years and he has hooked it up for me since then. Great kid, deserves everything that has come his way. He has shown some speed this year at the road races but does not have the finishes to show for it. I may click him a few time just because I have to but I would not recommend this play.

Justin Haley – Great little road racer. Show spirts of speed as well as leading a few laps on these tracks but starting P2 scares me knowing who is in this field that can outrun him. Stabs here though would not upset me.

Daniel Hemric – Finds walls. If not walls, then his shit breaks.

Harrison Burton – Has been on a slow up-tick this year on the road tracks. With him starting 9th and his best position possibility to me being 4th-5th I will take a few stabs here but don’t over do it.

Brandon Jones – I so bad wish that jones was starting where Burton was but that is not the case. Jones popped up in all my race notes and was set to be my sneaky play until I saw the starting lineup. That’s probably the closest to the front he could finish and doesn’t lead a ton of laps so I will stay away from him this week.

This is where things start to get fun!

Jeremy Clements – My boy! JC! So here is an under funded, family owned team that does nothing but wait for RC races. He had 1 win in the Xfinity series at none other than a RC. He somehow finds a way to finish top 10 in these races dating back to last year. Starting 18th at $8,500 I’m in!

Preston MF Pardus – He can make you all the money or cost you everything but this is one of those weeks that he is on the making money side for us. Road racing background and has proven that he can produce in these type of cars. Starting 30th…almost all in. (he did spin out twice at Indy road race – much more run off there for fuk ups. Not so much at Roval)

Michael Annett – He’ll finish about 8-11th and not pay for himself.

Myatt Snider – Another poppy Mcpopperson on the sheets and my notes from previous races. Dude is solid at these type of tracks. He finishes the races and usually is in or near top 10. Starting 21st at $7,800 doooooo it!

Alex Labbe – Mr. Labbe is on every single notes sheet for all the previous road races. He will run top 10 all day. I was hoping for a mid 20 starting position but lets hope with him starting 16th that will drive down ownership. He has had some back luck near the end of these road races but he is one of the most experienced in the field on these layouts so Ill be riding with.

Austin Hill – I would really like to say stay clear but as soon as I do it he’ll finish top 15 and make me eat my words and my money. So take a few, stick him in where you can but I would not core play this one.

Jade Buford – A “ringer” of sorts. Has a bunch of road race experience and not so much Xfinity experience but has raced this year and has shown speed. Has an average finish of just under 16 at these places and starting 24th. Ill take a decent share amount and hope for closer to a top 10.

Riley Herbst – He has been working on his road game over the year running in other road series to gain some experience turning right and he has done great with it. As the year had progressed so has his results and running pace. He should run top 10 all day and maybe get ya a 4th or 5th. Ill be here a decent amount as well.

Josh Bilicki – Dude has just as much experience on road tracks as any other road guy in the field. The equipment will hold him back a bit but he will play strategy and end up with a top 20 possibly top 15 finish. Starting 32nd at $7,000 I’m all over it. On all the sheets!

Kyle Weatherman – I wish I would have know this earlier in the year but Weatherman is a decent road racer. He is in lesser equipment but he has shown that he can produce better results with it than most could on these type of tracks. On all the sheets!

Stabs for the week:

Haley – top 5, maybe win if something crazy happens and could lead laps

Gaulding – could run 15th or so

Allmendinger (if you have to play him)

6 of the last 7 road course races have been won by either Cindric, Briscoe, Allmendinger

Remember this is a road course, there will be numerous pit strategies and most likely a bunch of cautions near the end of the race so DO NOT over expose yourself on one racer. Balance your lineups, especially with the bottom tear and lower priced long shots. Anything can happen at the ROVAL.

Thank you for joining us here at WLF. For all of our up to date plays, pick, tips and tricks follow us on FB, Insta and Twitter @WLFBETS. Also, catch our BS videos on youtube or right here at welivefantasy.com.