11:42 PM ETAssociated Press BRISTOL, Tenn. — Kyle Larson denied Kevin Harvick his first win of the season with a masterful pass at Bristol Motor Speedway that was overshadowed Saturday night by a postrace skirmish between Harvick and reigning Cup champion Chase Elliott.Tempers were so hot that Harvick, his losing streak now at exactly one… 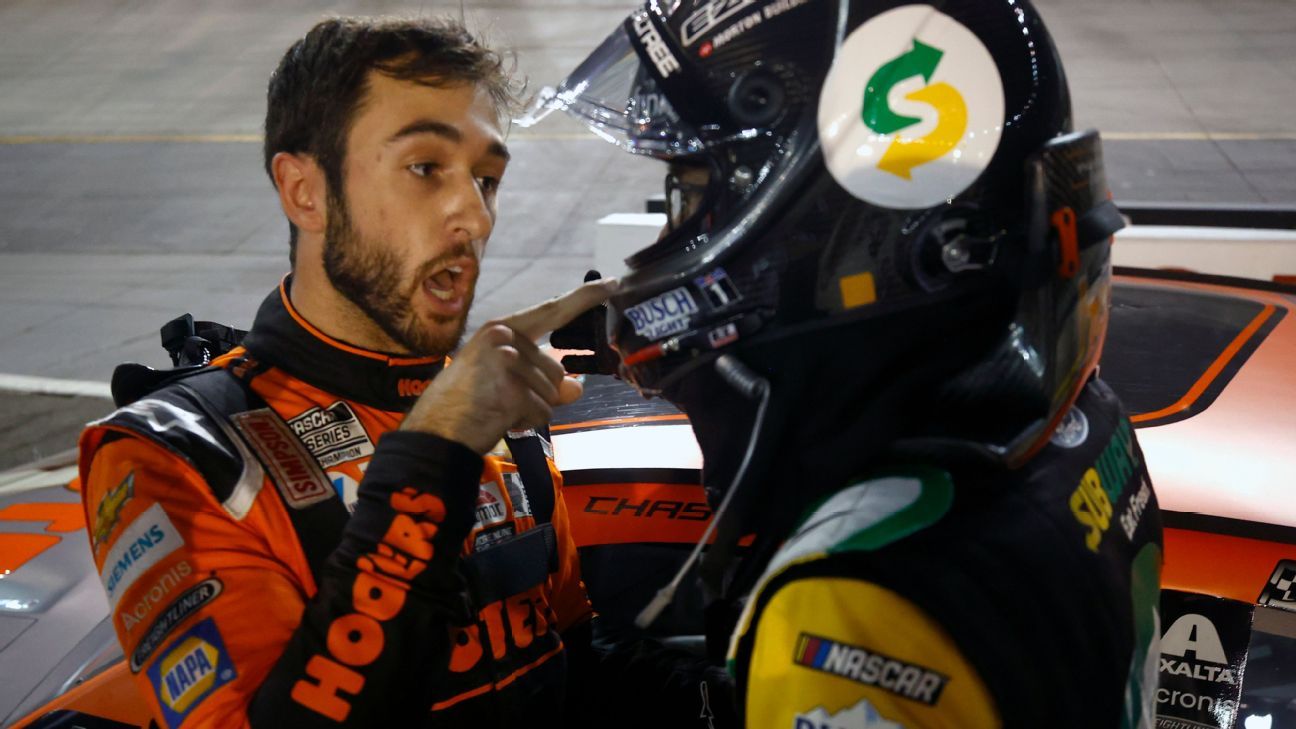 11:42 PM ETAssociated Press BRISTOL, Tenn. — Kyle Larson denied Kevin Harvick his first win of the season with a masterful pass at Bristol Motor Speedway that was overshadowed Saturday night by a postrace skirmish between Harvick and reigning Cup champion Chase Elliott.Tempers were so hot that Harvick, his losing streak now at exactly one year, declared “I’m ready to rip somebody’s head off” to a crowd undecided if Harvick or Elliott should be booed or cheered.”We were racing for the frickin’ win at Bristol, we’re three-wide in the middle and he throws a temper tantrum like I was just trying to get the lead and race him hard,” Harvick fumed. “Then he pulled up in front of me and just sits there until I lose the whole lead.”The crowd at that moment was very decidedly on Elliott’s side.”They can boo all they want, I don’t care,” Harvick said.Elliott, meanwhile, indicated Harvick pushes people around on the track and the pattern must stop.”It’s something he does all the time,” Elliott said. “He runs into your left side constantly at other tracks and sometimes it does cut down your left side and other times it doesn’t. He did it to me in Darlington a few weeks ago because he was tired of racing with me and whether he did it on purpose it doesn’t matter.”I don’t care who he is or how long he’s been doing it. I am going to stand up for myself and my team and go on down the road.”Elliott led a race-high 175 laps but Harvick passed him with 33 laps to go in an aggressive sequence in which their cars touched. It caused a flat tire on Elliott’s Chevrolet while Harvick was able to drive away unscathed.Harvick appeared headed to his first win of the season (his last win was Bristol a year ago), but a furious Elliott returned to the track after a tire change and deliberately slowed down in front of Harvick in an attempt to ruin Harvick’s race.The slowdown gave Larson a chance to close the gap and make the race-winning move with four laps remaining. It was a Cup-high sixth win of the season for Larson, the top seed in the playoffs.And it was a banner night for Hendrick Motorsports, which got a win from Larson and kept all four of its drivers in the playoffs. Alex Bowman and William Byron were both in danger of elimination at Bristol, the third and final race of the first round when NASCAR cuts the field from 16 to 12.Instead, Tyler Reddick, Aric Almirola, Kurt Busch and Michael McDowell were eliminated. Busch’s elimination means Chip Ganassi will not win a championship during his 20-year NASCAR career. He’s sold his team effective at the end of the season and Busch was his final title chance.But as the eliminated drivers sulked over their fate and Larson celebrated on the frontstretch, Harvick and Elliott fumed on pit road.The two at first parked their cars next to each other on pit road after the race, then followed each other down until they parked nose-to-tail and both drivers jumped from their vehicles. Harvick kept his helmet on and Elliott’s finger immediately rose to Harvick’s face.The jawing continued, briefly became physical and eventually led to a private discussion in Elliott’s hauler.

What You Need To Know About The 2022 NASCAR Cup Series Schedule
NASCAR Playoffs: Larson wins Bristol as Elliott and Harvick feud