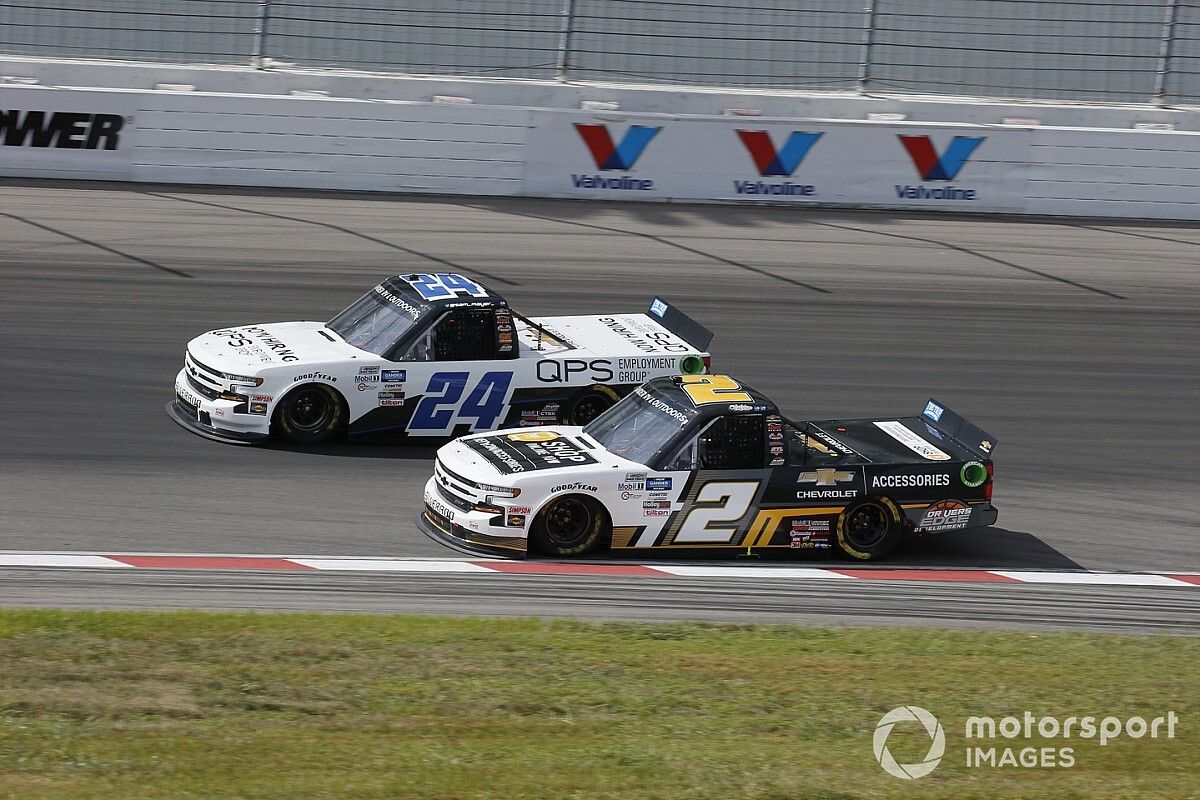 Its that time of the year once again for the paper clip Martinsville Speedway. This track is absolutely great to watch and even better to bet on. Here is what we know this year at short tracks, GMS trucks lead the laps and win the races, period. They are sprinkled throughout the field and the Draftking pricers have given us a great slate to build some lineups with so lets dive in.

Parker Kligerman – I will be fading PK this week. The numbers just do not add up for me at the steep price of $12,000. He would have to run top 5 and lead laps to pay up to that value and I just do not see that realistically happening at a place that he has struggled at in the past.

Brett Moffitt – This is one of the lock 3 plays for me this week. I mean you look at track history and all the “short” track races this year and there has not been a race where Brett has not lead a decent amount of laps. He also has 3 top 5 finishes in those 4 short track races this year. Fresh off a win last week as well whats not to love?

Austin Hill – Ya know he is a great driver in great equipment but historically short tracks are not Hills strongest tracks. He could definitely lead some laps and finish top 5-10 but at that price you’d need a lot and I do not see that happening. I will pay down

Zane Smith – Dude is nasty this year on short tracks and have 1 win to show for it. He has lead laps and a good amount of them at every short track race this year. Lock him in

Sheldon Creed – He showed us this year at Gateway that he can handle the short tracks and dominate so I will have my fair share of Creeds. Starting on the pole he pretty much guaranteed a good chunk of laps lead and fastest laps as long as the truck is rotating.

Sam Mayer – Here is another lock consideration. Mayer is a stud and short tracks are his shit. He proved that this year already with a short track win and has piles of laps lead at each of this track type this year. Starting 22nd, how do you not?

Christian Eckes – I have 5 or so lineups with Eckes. Herse the deal dude can go run up front and lead laps one minute and then end up in the fence and 32nd more often than alternative so I cant go heavy here but I have a few to be covered.

Brandon Jones – Fast truck, good driver, I don’t have enough of him and I hope it doesn’t bite me in the ass. Herse the problem with taking Jones…..you cant take ZSmith, BMoffitt and SMayer. He is a great play option don’t over look him.

Matt Crafton – If you read any of my shit you know you have to take Matt Crafton at every race every track every year until dude retires because he is a straight badass and will be in your winning lineup. I take about 5-10 Matt Crafton a week and it has paid huge and would have last week until Sauter took out Friesen and screwed that lineup all to hell. Crafton was in winning lineup at Richmond….he can do it again.

Grant Enfinger – If this were a plate track or drafting heavy track Id say this is the play but I would not recommend going heavy with him at Marty. He was also in the winning lineup at Richmond earlier this year for what its worth.

Todd Gilliland – Would have won at Gateway if Creed didn’t fence him late in the going and won this race at Marty last year. Need any more reasons? oh, he’s starting 20th, there’s that.

Johnny “cant finish a race” Sauter – I was here with Sauter last week with the leading lobby lineup doubled and he wrecked himself and friesen with about 23 to go to fuk everything up for me just like he has done all season. So, I will be on him again this weekend to take the beating again. Makes great sense don’t it? join me?

Stewart Friesen – starting 18th I took a few shots just like last week. That teams has seemed to finally got a hold on the new manufacturer body and has been performing well lately. He is a short track kid of guy so worth a few.

Tyler Ankrum – As I sat down to write this I looked back over everything one last time and realized one thing…I did not have enough Ankrum. He is a short track guy and he lead a good amount of laps just recently at Bristol. GMS equipment alone should be reason enough to take him. I will be adding more lineups with him.

Spencer Davis – Starting 36th he is worth a few darts but at that price and not that great of track history I cannot go heavy here.

Carson Hocevar – This guy has pretty much found everyway to screw shit up for me this year so I will take him again this week starting 33rd and watch him drive up to the top 10 only to run out of talent near the mid points of the race and smash all my greatest lineups dreams.

Ben Rhodes – I do not like him nor do I like picking him but he has found himself in 2 of the 4 short tracks this year and has not finished outside the top 10. I have to take him and you should as well at the nice price of $7,500.

Ryan Truex – Starting position is the only reason I have a few. He could run up to 12th or so and if he does I wont be mad but Id rather see him run right about where he starts.

Raphael Lessard – Starting to close to the front for me to try and better options below.

Tanner Gray – Here’s the deal dude has laps on this track in a truck last year and finished top 20. He is starting 12th which hopefully will keep ownership down. Gray ran 3rd at Bristol earlier this year, could he do that again?

Trevor Bayne – Between him, Sauter and Crafton it is a toss up of who has the most laps on this track. Experience is key here and I will lay my hat on his and the price of $6,600.

Danny Bohn – Starting 19th is kind of scary for me with him but he could finish top 10 like he did earlier this year at Gateway. Ill take a few shots

Tate Folgeman – He is better than a 27th place truck. How much better I don’t know but I wouldn’t want to miss out on all the fun if he finishes 12-15th.

Clay Greenfield – If you are stacking lineups he is a decent options starting 32nd.

Bj MF Mcleod – He’s the dude man. I don’t think that truck is all that great but I know BJ has a ton of laps here and he only gets into a truck if its at a place he thinks he can compete. So take a few shots, it’ll probably be worth it.

Thank you for the read and hope you cash with me! Let us know about your results we love to see our readers taking down lobbies. Check us out on our FB, insta and Twitter @WLFBETS and our youtube page We Live Fantasy!