CLOSE Sports Pulse: Jimmie Johnson’s transitions behind the wheel USA TODAYJimmie Johnson didn’t retire from racing last year; he just retired from NASCAR after 19 seasons in the Cup Series, seven championships and 83 checkered flags. Now, Johnson is about to try something new, something he’s been dreaming about since he was a kid growing… 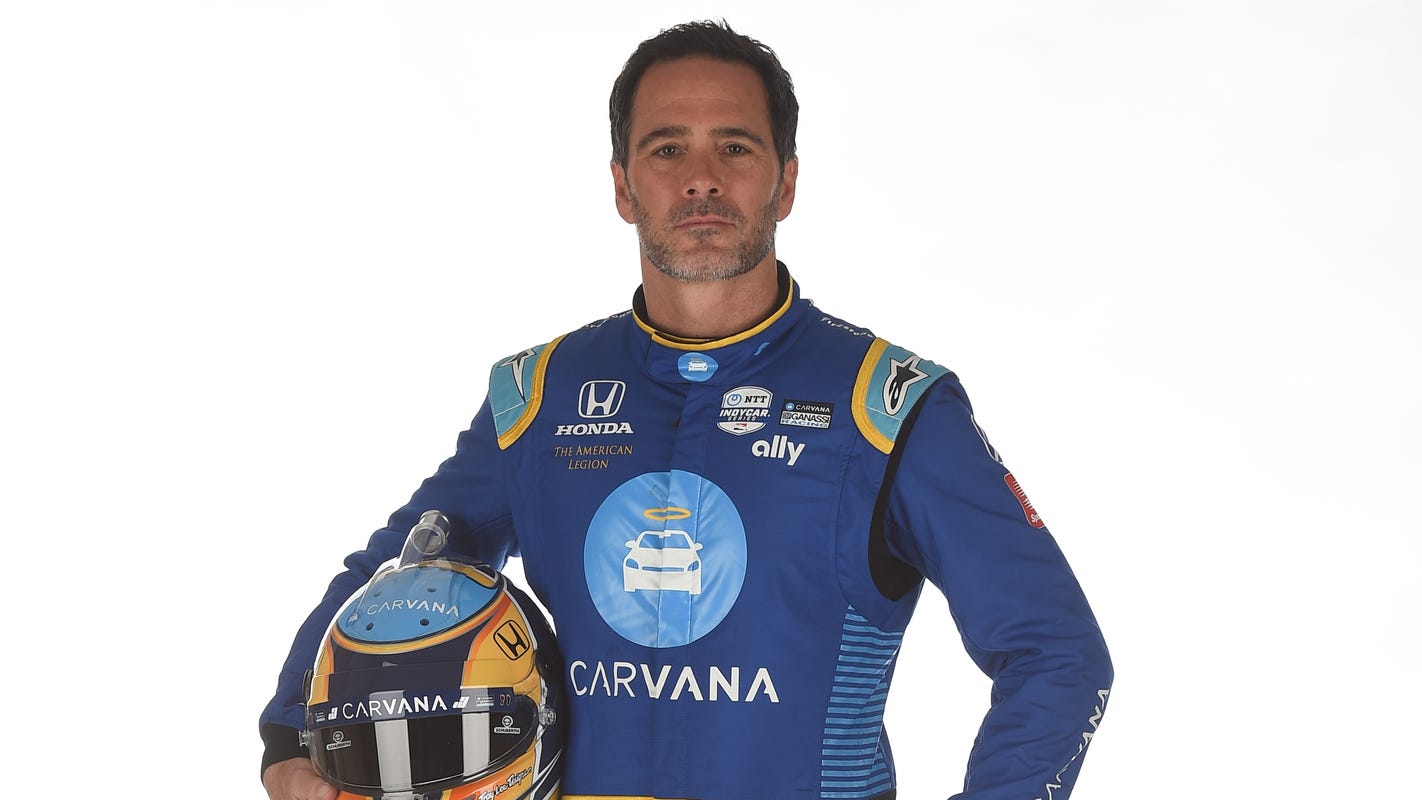 USA TODAYJimmie Johnson didn’t retire from racing last year; he just retired from NASCAR after 19 seasons in the Cup Series, seven championships and 83 checkered flags. Now, Johnson is about to try something new, something he’s been dreaming about since he was a kid growing up in Southern California.“IndyCar was the early dream for me,” Johnson told For The Win. “I’m excited. I’m optimistic about it. I’ve got a long way to go.”He’ll be a 45-year-old rookie in the open-wheeled NTT IndyCar Series, competing in 13 road- and street-course races for Chip Ganassi Racing this season beginning Sunday with the Honda Indy Grand Prix of Alabama at Barber Motorsports Park. And even though the ride has a totally different look, he’s still behind the wheel of a No. 48 car, which veteran IndyCar champ Tony Kanaan will pilot for the oval races.For The Win recently spoke with Johnson about a variety of subjects, including shifting into IndyCar and the extreme challenges that come with competing in a new style of racing.This interview has been condensed and edited for clarity.1. How does it feel to be a 45-year-old rookie competing in IndyCar, something that’s a totally different style of racing than what you’ve been doing for the last couple decades?Johnson: Definitely a rookie. I can vividly remember the feeling and head space of being a rookie coming into Cup. And it’s very similar – the concerns you have, in your mind, self doubt, the curiosity of what’s ahead. How am I going to do? Where am I weak? Where am I strong? All that stuff’s still very much the same.But I do feel like being older and more experienced is helpful. And I know I’ve been through this before, and I know I’m going to survive it, regardless of the outcome. Barber is going to be full of surprises. And then they’re rolling to St. Pete, and I’ve never been on a street tire or street track, and that’s gonna be full of surprises. But I’m just gonna roll with it. It’s such a fun car to drive. I can’t describe just how intense and how fun these beasts are to drive, and I love every time I get behind the wheel of one.2. Can compare how it physically feels for you to drive an open-wheeled car like that versus a stock car?Johnson: Bristol in qualifying is similar. Dover in qualifying is similar. But in IndyCar, that’s every lap all the time. The intensity is so high because the vehicle’s downforce performance and the weight of the vehicle and the tire – they’re just a far superior vehicle. Then you add in the fact that you don’t have any power-steering assist, and the workload goes up 10 times.AutoplayShow ThumbnailsShow CaptionsLast SlideNext Slide3. Have there been times driving an Indy car when you felt scared or out of your depths?Johnson: Yeah, basically every lap I’ve made so far (laughs). When you leave pit road on cold tires, it is so evil until you get enough tire temperature and tire pressure that you scare yourself and you pull back. I’m learning that’s when you need to keep pushing, because the quicker you can gain temperature in the surface of the tire, the quicker that turns into tire pressure, and the better the car is.When I first started, it would take seven or eight laps to hit that target air pressure number in the tire. Now I’m able to do it on lap three or four with my teammates. So that’s been a big hurdle for me to get over, (and) that’s just one example. Then once the tires are up at a track like Barber and the commitment level that’s required to put up a lap time, my senses have never been through anything like that before. It’s insane.It sounds like it. Johnson: These guys make it look easy, which is the crazy part.STORIES TO WATCH: IndyCar returns with Team Penske and rookies in spotlight4. Do you feel like you’ll get there as well, though?Johnson: Yeah, it just takes time. I’m under a second off my teammates at the last Barber test session – closer by a half a second off, which we’re all just ecstatic about. The last few tenths are always the hardest, and that’s what takes years and years and years. So I feel like I will make some quick gains and get to a certain point, and then I’m just going to need the reps.5. Is there anything that’s a clear No. 1 goal for you this season?Johnson: I need to make sure that I run every lap or as many laps as I can, and that means being smart trying to make passes, being smart on my out laps on cold tires. I’m just literally at that stage learning tracks, where every lap really does make a difference, and I learned something new.CLOSE

USA TODAY6. Is winning a race a realistic goal for you at this point?Johnson: I don’t feel like it is. I’m not saying it can’t happen. Strategy is a big part of IndyCar racing. They only make two pit stops in most cases. So fuel strategy and execution by team and driver in the race can put you in a position to win, but I think in an all-out shootout, heads-up race, I don’t see me being there this year.7. What course are you most excited to race on?Johnson: I would have to say Long Beach. That was an annual stop for me as the kid growing up on the West Coast and the place where I heard an IndyCar scream by on the back straightaway as I crossed the walkover bridge, and thought, “Man, I’ve got to find a way to get one of these cars and be out there.” So 25, 30 years later to being in IndyCar and being inside the ropes is really special for me.8. What course are you most nervous to race on?Johnson: I have heard the Belle Isle track is so violent and so rough. And it’s a doubleheader weekend – race Saturday, race Sunday. So I’ll know more this week (after Barber) about where I am physically and how much more I need to strengthen myself to go again a second day. So, but that’s the one I probably have the most concern about right now.9. You’ve done so much other racing between the end of the NASCAR season and the beginning of the IndyCar season, and it seems like you’ve had a chance to get to know some of the other IndyCar drivers a little better than you had before. How would you describe your relationship with some of these guys?Johnson: I feel very well received. I think there’s a lot of respect we have both directions. I’ve been to a handful of different IndyCar test sessions and races and stuff, and I think people can see that I really do respect their craft and their abilities. And at the same time, I think largely through racing in the 24 Hours of Daytona, I’ve been able to build a lot of friendships with current drivers.That’s where I met Dario and Marino Franchitti; it’s the first place I met Scott Dixon. So I feel like some of these other races I’ve put myself in have really opened my friend group up.10. Whether it’s a teammate or fellow competitor, has any IndyCar driver given you some advice that’s stuck with you as you prepare for a totally different style of racing?Johnson: My teammates have been so helpful – Scott (Dixon), Marcus (Ericsson), Alex (Palou), of course, Dario. They’ve been above and beyond, and I am so thankful.One thing that does stand out to me is after the Sebring race, I made a couple of big mistakes and was feeling down and out and lost a little bit of confidence based on what I did. And I got a text from Alexander Rossi. It’s like, “Hey, man, chin up. I know how hard the transition is. I tried to get around Bathurst and the V8 Supercar last year and had plenty of issues. Tons of respect for you making the switch, and chin up.”And I know him. I’ve had some drinks with him in the past, and I’ve hung out with him socially. But for him to send that text was pretty telling to me. I was like, “That’s cool.” I really appreciated that text from him.11. So, what’s the deal with the fire suits with the straight-leg, fitted style in IndyCar versus the boot cut in NASCAR? You posted a photo on social media recently that had some NASCAR guys calling you a traitor. Is that a personal preference or what?Casual Friday attire pic.twitter.com/LHfvDXvIsH— Jimmie Johnson (@JimmieJohnson) February 26, 2021Johnson: Yeah, culturally, each leg cut has its home – although they were all peg legs way back in the day. But (in) IndyCar, I feel like weight is such an important item for the open-wheeled cars, and the open-wheel suit is much lighter than the NASCAR style bootleg-cut suit. And when teams are drilling holes in bolts and shaving the bolts down to where there’s only two threads showing on the other side of a nut to save fractions of an ounce, when your suit’s two pounds heavier from one version to the other, it’s a pretty easy decision what you’re gonna do there.If you hold up my NASCAR suit from last year to my suit this year, it is a noticeable difference in weight.Oh, wow. I thought it’d be related to footwork or something like that, but it’s weight.Johnson: It is weight. And the footwork side – climbing in the cockpit of an Indy car is so tight that I feel many feared the bootleg material would kind of ball up, and it’d be hard to put your legs through the bulkhead of the tub of the Indy car to get up to the pedals. So actually, there’s less material, less stuff to snag, less stuff to bunch up. And then it’s just way lighter.Find New & Used CarsNew CarsUsed CarsofPowered by Cars.com
Read More

JR Motorsports adds sponsorship for Josh Berry for two races
Friday 5: Call it a roof or a cover over Bristol, but it likely will be costly