NBC Sports will take a look at the life, legacy and long-lasting impact of Dale Earnhardt who died 20 years ago this week on the last lap of the 2001 Daytona 500 on Feb. 18, 2001. This is the fourth chapter in an oral history series that remembers “The Intimidator” though the voices of those… 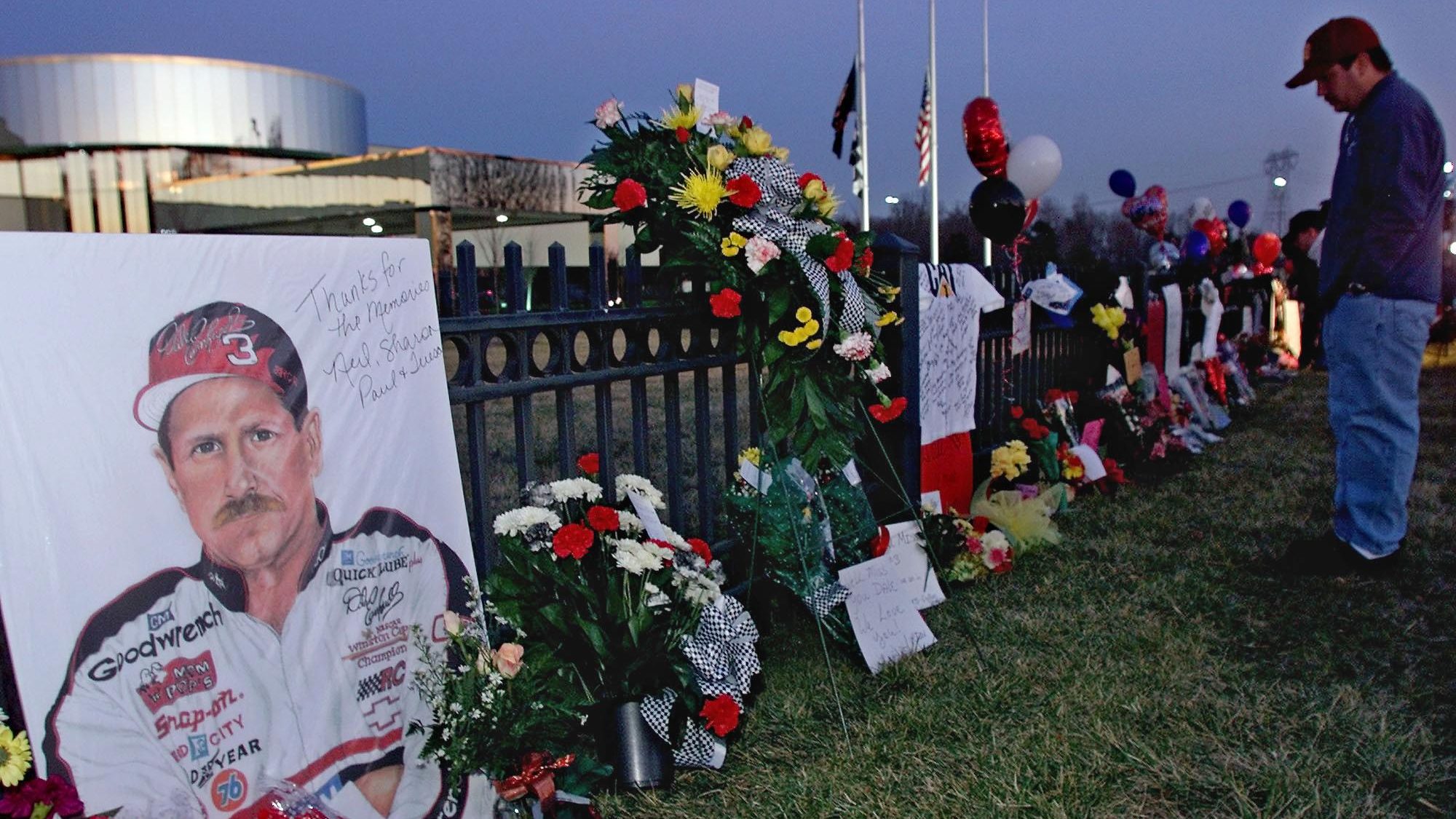 NBC Sports will take a look at the life, legacy and long-lasting impact of Dale Earnhardt who died 20 years ago this week on the last lap of the 2001 Daytona 500 on Feb. 18, 2001. This is the fourth chapter in an oral history series that remembers “The Intimidator” though the voices of those who knew the seven-time Cup Series champion who remains one of the biggest icons in NASCAR history.”
After Kyle Petty’s son, Adam, died in a crash during practice at New Hampshire Motor Speedway in May 2000, Kyle Petty noticed a difference in Dale Earnhardt toward him.
“I could see Dale walking through the garage area,” Petty said. “If I was walking straight at him, he would turn and go the other way. He never acknowledged it. Never spoke from May of that year for the rest of the year, I never spoke to him. Never said a word to me. If we were in the drivers meeting, he would nod, and I would nod at him. He was not the only one. There were a lot of people that were the same way. So I’m not singling him out by any stretch.”
Things changed in early February 2001. Petty and Earnhardt competed in the Rolex 24 at Daytona International Speedway for different teams. After both completed a shift in the middle of the night, Petty saw Earnhardt walking ahead of him.
“I thought, 2:30 in the morning, I’m going to make him talk to me,” Petty said. “I just ran up beside him. I said ‘How it’s going down here man?’ You could tell it caught him off guard. He said,
“It’s good. It’s different.” We just chit-chatted about the race, how these cars were driving at night, what it was like in the infield. Just nothing.
“As we got to the gate to get to the bus lot, he said, ‘Come on here for a minute,’ so I followed him over to his bus, which was on a different row. We sat outside his bus and probably talked for an hour or hour and a half just about everything.
“He had watched Adam grow, he had a son and it hits so close to home, he just didn’t know what to say (after Adam’s death). He just didn’t know what to say. It was painful for him. It was painful for him to talk about it. It was painful for him to acknowledge it. It was painful for him to talk about it a year later almost.
“It was just something that he didn’t ever want to think about, never wanted to have to confront and he had watched me confront it. It was incredibly emotional. I will say that. For both of us in some way.”
Fast forward two weeks to Feb. 18, 2001. Shortly before the Daytona 500, Earnhardt and Petty met again. This time it was before driver introductions.


This photo was taken at intros before the 2001 Daytona 500. Today, we remember Dale Sr. for who he was & for his impact on #NASCAR. Watch #CoffeeWithKyle to hear Mike Helton talk about that day and how racing changed because of it. Very honest stuff… https://t.co/Vprz4AjQKu pic.twitter.com/WpmGZDuqOa
— Kyle Petty (@kylepetty) February 18, 2019

“Standing behind the stage there, and he comes over,” Petty said of Earnhardt. “I’m going to tell you, I’m not going to lie. When he came over to say something, I just started crying. He said, ‘Listen, dude, it’s going to be all right.’ He said, ‘I know you feel bad. It’s going to be all right. Just hang in there.’ ”
A few hours later, a last-lap crash would claim Earnhardt’s life.
This is that day 20 years ago told by those who were there:
Richard Childress (Coffee with Kyle in 2019): In 2000, we had finished second to Bobby Labonte. We didn’t miss that championship by much. I remember  Dale was in Daytona had run the 24 hours, he called me from down there and he said … “We’re going to win this championship in 2001.” He said, “I’m going to be better on every track I go to.” He said, “I picked up a lot down here.” I don’t really know what it was he picked up, but I will never forget that conversation. I sat in my trophy room that night and I said, “We’re ready.” We were set to win the championship.
Dale Jarrett: Dale and I, our motorhomes were parked right across from each other at Daytona. … On Thursday after the 125-mile qualifying race, I’d gone to take the trash out, and he was sitting outside his motorhome. I’d started to wear the HANS device. And literally the Bud Shootout was the first time I really wore it in competition. I had experimented with it in testing at the end of 2000. So I wore it in the 125-mile qualifying race also. That was the longest period of time I had it on.
So I saw him outside, he said “Come over.” We sat down and were drinking a couple of beers, and our conversation turned to him asking me why I was wearing the HANS device. We’d had conversations about it, how it was uncomfortable. He didn’t like it. He didn’t think it was something he would ever get used to because of the way he liked to feel and be in the race car. I appreciated and understood that.
But something that always stuck out to me then, especially after Sunday happened in that Daytona 500, was that we were sitting there and one of his questions to me was “Are you wearing this HANS device because you’re afraid of dying?” And I said, “No, I don’t think about that side of it in that respect, Dale. I think it gives me a better chance in a crash at an angle that might stretch you further than what your body can withstand.” We talked about that for another six to eight minutes. It was a conversation that at the time just seemed like a conversation. It obviously took on a whole new meaning a few days later.
Dale Earnhardt signs an autograph after Daytona 500 qualifying on Feb. 10, 2001 (Kelly Jordan/News-Journal)
Don Hawk (president Dale Earnhardt Inc. 1993-2001): Saturday night (the night before the race) … he’s getting in his yellow Corvette in the driver/owner lot of Daytona International Speedway. You look across Turn 4 and can see the roof of the Hilton Garden Inn, where Dale almost hit at that point. I was staying there. He looks at me and says, “You get everything done you wanted?” I said “Yeah.” He said “You have a good week?” I said “Really good.” He said “Why don’t you surprise Cindy and pack your (stuff) and head on home because tomorrow you’re going to see something you’re never going to forget.” That’s the last words I heard out of Dale’s mouth.
Dale Jarrett: My Sunday morning started with doing hospitalities on that race morning. I had to go outside (the track), and the majority of us had to go outside to do ours. Earnhardt had hospitalities brought to him because he could do that. He was in the motorhome lot with a group of 20-25 that had come to talk to him. He was signing autographs.
I told the people with me as we were getting ready to go on a golf cart outside the track, I said “Watch this, he’s just signing away and talking and not paying attention.” This was the first time they had UPS hats. I walked over, took my UPS hat off and handed it to him. He signed it and was literally handing it back and realized it was me. I had just a couple of years ago given it to Dale Jr., the only signed UPS Dale Earnhardt hat. That’s how the day started.

Through the years after my dads death many drivers and industry folk were incredibly supportive, and that certainly includes Dale Jarrett. Today he gave me that hat my father signed all those years ago. It’s hard to know how to express my appreciation for his friendship. pic.twitter.com/lbKK9iR44K
— Dale Earnhardt Jr. (@DaleJr) June 7, 2018

The Daytona 500
Kurt Busch: I was a rookie in the wrong spot according to Senior. I think I was in the wrong spot. I was running in the top 10. On my right side, the 3 car comes scrapping by and drove up to the front of me and I’m like, “What did I just do?” Then I see his finger out the window. “OK, I was probably 99% wrong there.” Unfortunately, I never got to talk him afterwards about it. But, again, he’s the Intimidator. He was a force on the track just in those few short races (Busch ran with Earnhardt in 2000-01). Anytime the black 3 car was running around you or in the mirror, he had that presence. He was the Intimidator. Again, it was a privilege to race against him. He was taken away from us too soon.
The caution comes on Lap 175 for a 19-car accident on the backstretch. As Tony Stewart’s car goes airborne, Dale Earnhardt drives by and is not among those involved in the incident. Stewart is taken to a local hospital.
Tony Stewart rolls down the backstretch late in the 2001 Daytona 500. (Robert Laberge/ALLSPORT)
Tony Stewart (2011 interview with AOL Fanhouse): It’s like, if I could have just nicked him on the way by, would it have changed things just enough to keep his accident later from happening? There’s no way anyone would ever wreck and think about hitting someone else believing it would do any good. I was along for the ride. But, it was just like, what if? If you looked at the two wrecks, you would have swore I was the one. … that if one of the guys passed away, you’d have swore it was from my crash, not his.
As Michael Waltrip leads Dale Earnhardt Jr. through Turn 4 on the final lap, Dale Earnhardt Sr. is among a group of cars, including Sterling Marlin and Ken Schrader. There’s contact and Earnhardt’s car shoots up the track into the concrete wall.
Mike Joy (calling final lap on the Fox broadcast) Big Trouble! Big wreck behind them!
Official Accident Report No. 3 Car (Volume 1 of 2): At the time of the impact with the wall, the No. 3 Car was traveling at approximately 157-160 mph.