BROOKLYN, Michigan – With the NASCAR regular-season finale now looming at Daytona, Sunday’s thrilling finish at Michigan delivered a sneak preview of the mad drafting scrambles that can determine a Cup race. “It was like an old-school superspeedway draft feel at a 2-mile track,” Kurt Busch said. And just like a typical old-school plate race… 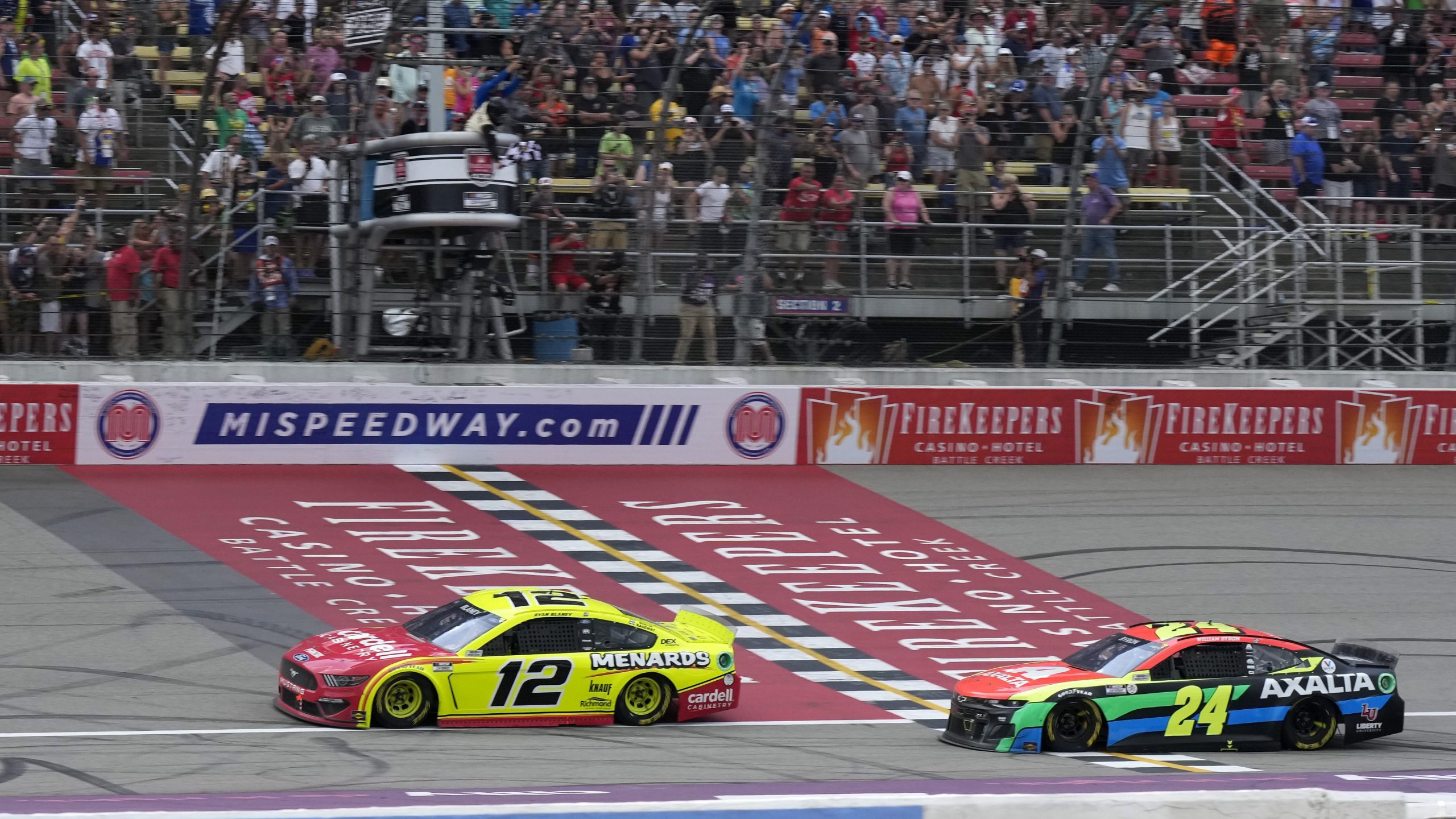 BROOKLYN, Michigan – With the NASCAR regular-season finale now looming at Daytona, Sunday’s thrilling finish at Michigan delivered a sneak preview of the mad drafting scrambles that can determine a Cup race.
“It was like an old-school superspeedway draft feel at a 2-mile track,” Kurt Busch said.
And just like a typical old-school plate race at Daytona or Talladega Superspeedway, everyone but race winner Ryan Blaney was second-guessing their moves in the closing laps.
Let’s start with Busch, who zoomed from eighth to fourth after the final restart with eight laps remaining but still was flummoxed about finishing behind Blaney with the Hendrick Motorsports Chevrolets of William Byron and Kyle Larson.
“It’s such a blur the last couple of restarts, I don’t know what all happened, Busch said. “I have to go watch the tape. I’m just dumbfounded that a Chevy didn’t win today.”
Calling it “a plate race in disguise,” Busch said he “wanted a do-over” after watching Blaney time all the right moves after shooting into the lead from second on a push from Kyle Busch in the nonpreferred inside lane.
“It was like an old-school drafting chess match, and then it turns into choosing your lane,” Kurt Busch said. “Bailing on your buddy. Grabbing a spot when you can. If your momentum is cut, you’ve got to start blocking. You just take what you can get.”
Larson, who finished third after leading a race-high 70 of 200 laps, also was lamenting some of his own mistakes, which he blamed on worrying too much about retaining his regular-season points lead over fifth-place finisher Denny Hamlin.
“Honestly I probably just had points on my mind too much,” Larson said. “Cost myself a win but just didn’t want to get in there and make too bold of a move and make a mistake and wreck and lose a bunch of points and positions. We really need to win that regular season championship.”
The No. 5 Chevrolet driver, who is winless at Daytona and Talladega, also was a little less enamored than Busch with the momentum-based racing.
“Yeah, I mean, like ARCA Daytona race where we’re just single file,” Larson replied with a smile when asked if it seemed like a Daytona-style drafting. “Yeah, I don’t know. I’m glad we don’t have too many more of these. I think we have one to two more of these (550 horsepower) package races left. You don’t really get to race here. You kind of just race on the restarts and race at the end. Other than that, you’re just trying not to race so you don’t get stalled out.
“I feel like all the restarts, here and Kansas, places you’re reliant on a push, the top lane can stay organized and get the momentum built up, and at the end, everybody is so desperate, it kind of breaks up, and the shorter distance (on the inside lane) wins out.”
Slightly less frustrated was his Hendrick teammate Byron, who was leading entering the final restart. The top three of Byron, Hamlin and Larson all chose the outside. While Blaney made the winning call from fourth to restart (“no one took the bottom, and I said thank you”), Byron lost the lead fending off a challenge to the outside from Hamlin.
“You don’t want to choose the top, because obviously there’s more room for someone to go around you, but you have to choose the top just to be able to defend the side draft, so it’s really all about your pusher,” said Byron, who finished second after overcoming sliding through his pit box earlier. “You have to get linked up in the restart zone, which makes your lane go, and then it’s all about how they stay with you in the middle of 1 and 2, because there’s still enough grip to peek to the outside, but it just depends on what they want to do. It’s just part of it.”

What matters at Michigan: With clean air comes control of the race
Michigan winners and losers