Dirty job: How NASCAR’s Bristol Motor Speedway was converted from concrete to clay 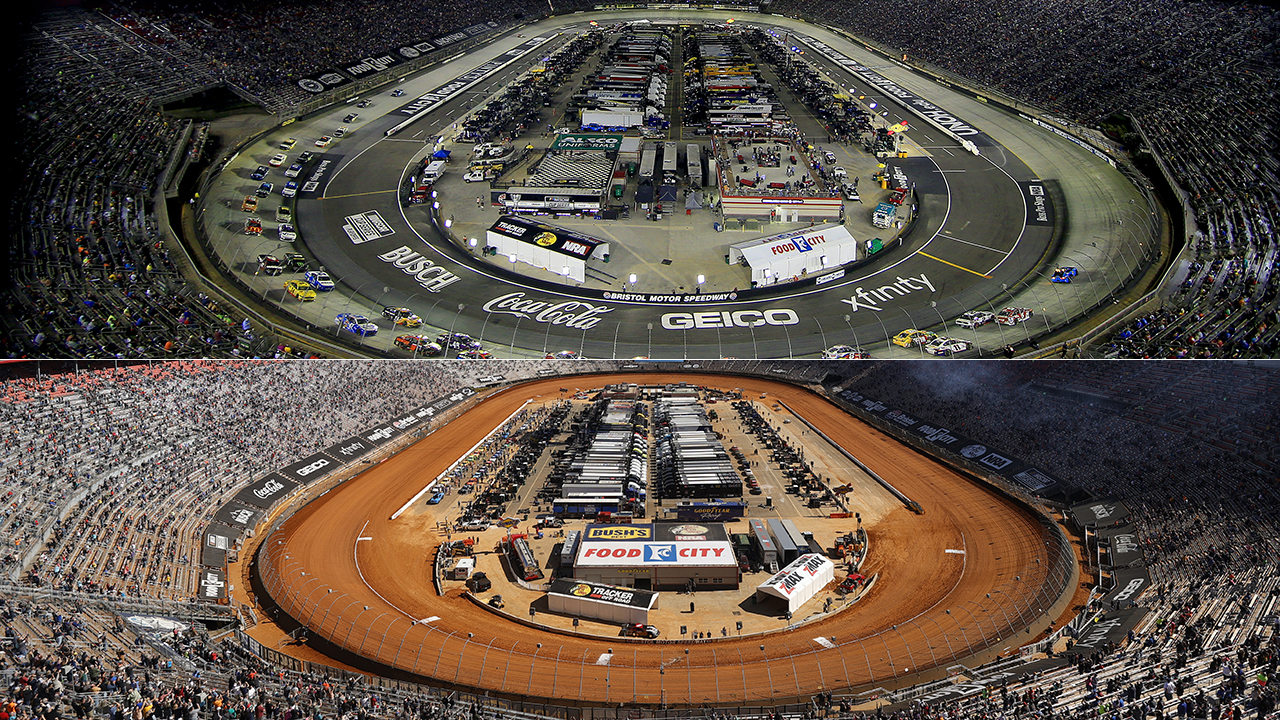 (David J. Griffin/Icon Sportswire via Getty Images | Jared C. Tilton/Getty Images)For the second year running the half-mile oval in Tennessee has been temporarily turned into a dirt track for its spring NASCAR weekend.
2,300 truckloads of clay need to be hauled into the Bristol Motor Speedway to convert the surface from concrete to dirt.
(Bristol Motor Speedway)The project is on the same scale as when NASCAR converted the Los Angeles Memorial Coliseum into a paved quarter-mile track for the season-opening Clash in February, and the two-month process involves a lot more than just tossing some dirt onto the concrete.
The turns feature progressive banking from 16 degrees to 20 degrees
(Bristol Motor Speedway)Steve Swift, vice president of operations for Bristol owner Speedway Motorsports told Fox News Autos that they’re using the same red clay they shipped in from four locations for last year’s event, but have improved the blend to make for a more uniform surface.
The clay runs from one to two feet deep on the straights to six to 12 feet deep in the curves.
(Bristol Motor Speedway)After laying down three to four inches of sawdust to protect the pavement, it took 2,300 truckloads to move the 23,000 cubic yards of clay into the stadium.The depth of the clay ranges one to two feet on the straights to six to 12 feet in the turns and the design of the banking has been modified using lessons learned at the first race. Instead of a nearly constant 17-18 degree grade they now feature a progressive design that goes from 16 degrees on the inside line to 20 degrees at the wall.Swift said the hope is that this will create multiple grooves and that the steeper outside line will give the cars more to press against as they slide through the curves, which should increase their speed.
Joey Logano won the 2021 Bristol dirt race.
(Jared C. Tilton/Getty Images)The track hosted the Karl Kustoms Bristol Dirt Nationals for modified cars in March to shake down the surface before the NASCAR Truck Series and Cup Series comes to town Easter weekend. Two weeks later the World of Outlaws sprint car series will race at the track and the cleanup begins as it is returned to concrete for the September NASCAR playoff weekend.Swift said that will take six weeks to clean things up, quite literally. Over the course of the race weekends, clay gets kicked up into the stands and onto the roofs of the suites at the top of the facility. After removing the track surface, they start pressure washing at the top and work their way down until there’s not a spec of clay left inside.CLICK HERE TO GET THE FOX NEWS APPThey’ll be storing it again, however, with the expectation of another dirt race in 2023. It hasn’t been confirmed, but Swift said the spectacle has increased demand for tickets and interest in the event.
Read More

NASCAR’s dirt race is this weekend and one veteran driver says it would be better if they got rid of windshields
Bristol Dirt Heat Race Lineups: April 2022 (NASCAR)