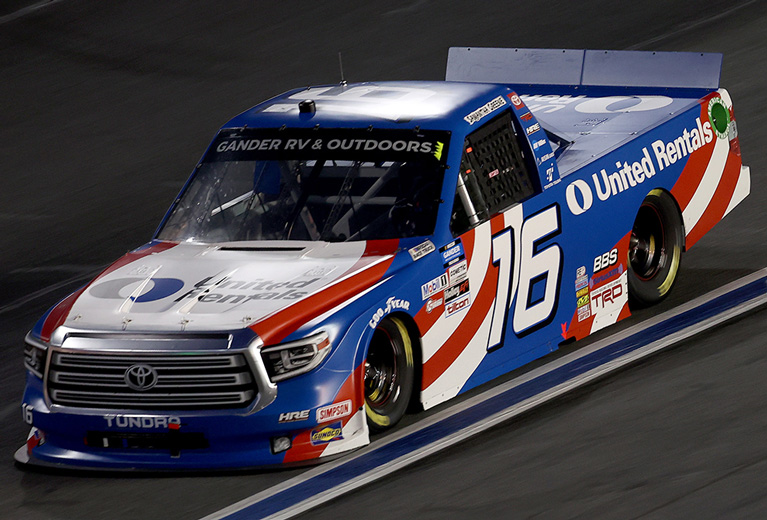 For the third time this year the Truck Series returns to Kansas Speedway for the Clean Harbors 200. Kansas is a asphalt 1.5-mile oval track with 17-20 degrees of progressive banking in the corners, 9-11 degrees of progressive banking on the front stretch, and 5 degrees of banking on the backstretch. Earlier this year when the Truck Series raced at Kansas it was a double-header in which the teams had to run both races with the same truck. This played a big role in the 1st race where teams tried to keep the nose clean and bring it home in one piece so they could run it the following day. There was not much wrecks or cars that fell out in race 1 vs race 2. Race 2 ended up with 12 trucks not finishing the race. I see this being most due to the fact that it was the 2nd race in just 2 days for these guys and some where trying to get a good finish day 2 because they didn’t day 1. This allowed for great place differential on some guys starting in the back that would not normally run up into the mid-20 range. With this being a regular weekend, I do not see that many trucks falling out, I think it will be a normal race especially compared to last weeks festivities at the Roval River race.

The pricing this week is a bit strange to me and does not leave you with a ton of options down low to help you stack the top of the board. There are also a decent amount of good trucks starting towards the tail of the field. This means place differential could be huge!!! I am looking to target a few sleepers down low to get me around 30 pts each, 2 mid range guys that will get me the differential, and grabbing a couple potential lap leaders.

Here is my player pool for this weekends race:

Parker Kligerman – I really hate having to pick the chalk that everyone else is going to pick but it has to be done this week. Parker has been helping that team get faster as the year has progressed and ran very well at tracks like this earlier this year. Starting 35th, Ill pay the $11,100 in hopes for that top 10 that I know he can get.

Austin Hill – Starting 8th and boy knows how to git er done on these progressive bank 1.5 mile tracks. He won one of the race here earlier this year at Kansas. He also has wins at Homestead and Las Vegas which are two similar tracks configurations. Hill will make a serious run at the victory on Saturday.

Christian Eckes – Buyer beware here! Could end up in front and lead laps or could hit the fence and end up finishing where he started.

Zane Smith – This is the guy! Nobody was prepared for Zane and his speed at 1.5 mile tracks this year. Zane has led laps and ran top 10 or won at all the tracks that have multiple groves this year. He has great chance of getting you fastest lap and laps led points with a shot at winning. Ill be on that train.

Sheldon Creed – What we think of Zane is basically the same as Creed. I would say that across the board Zane is probably a hair better on these tracks but Creed has brought the speed all year and I expect nothing different here.

Grant Enfinger – I would not go heavy here at all because he will probably finish where he starts but he has shown spirts of speed this year and knows how to win a race when the truck is good enough. I will be covered here.

Todd Gilliland – Looked great here race 1 earlier this year and led some laps early. I look for him to show that speed again. Starting 17th, a top-7 will do us just right and he can make it happen.

Matt Crafton – Listen, you have to always play a few Crafton’s if you are mass entering. He will most likely run top 10 all day and sneak a top-5 finish out of his, at least that what history says, and get you 40ish points. But, there are those rare occasions where he goes out and wins just like he did earlier this year at Race 2. Yes, I was on him then and I will be on him again.

Ben Rhodes – Another buyer beware. Starting 2nd is a concern for me. I don’t think he has the speed to run up front or lead laps so I will not be on him much. He does has a few top 5s here.

Derek Kraus – I really wish his starting spot of 12th was more like 17th or further back because I do think he can get a top 10 for us. I will take some stabs at 12th and his price of $8,200 but do not get wild.

Tanner Gray – Fit him in as much as you can. He proved he can finish top 5 here earlier this year and run top 10 all day. $8,000 is very affordable for the value you get with Gray. I will have a decent amount of shares here.

Timothy Peters – Wooooah! Missed ya buddy. Actually, I really didn’t like or dislike him at all when he was a regular but its nice to see people come out of the weeds and give it a go. I will definitely have him in a few because I know his experience level but I do have a concern for rust. Hopefully, he knocks it off quick!

Ryan Truex – Its Neice equipment and they tend to run good here. Ryan has has a few runs of just outside the top 10. If he decides to pull one of those off this week I will make sure to have a piece of the pie.

Hailie Deegan – Ok, Danica Jr…I’m going to take a few because your starting 34th and I know you don’t mind plowing your way to the front but I swear if you fence it in the first stage I will add you to the black list.

David Gravel – We saw David earlier this year at Michigan and he started 12th finished P10. With that little bit of history, I feel safe to take him starting 25th at $6,500. It is also GMS equipment which is top notch shit.

Tyler Hill – Earlier this year at Race 2 Tyler did exactly what he needed to do by finishing 16th. I look for him to do that again. Starting 28th at $5,900, how do you not?

Spencer Boyd – The biggest thing to take away here is the 31st starting spot. Spencer and that truck are way better than 31st. His finishes of 23rd and 18th earlier this year gives me a lot of hope that he will be our guy down low to get us the points.

Tate Fogleman – Risky play here but it gives us something else down here to limit the exposure on the two previous mentioned. Tate ran 22nd and 17th here earlier this year and I’m hopping for the later in this case.

I would be careful with anyone else I did not mention. I do see the need to have a few Moffitts, Sauters, Chandler Smiths, and Ankrums just incase they decided to do heroic things.

Thank you for your continued support at We Live Fantasy. Make sure to follow us on social media, @WLFBETS and keep checking our website as it progresses. We also have our videos posted on our youtube page! Let us know about your earnings!

Examining the elite eight in Cup playoffs
Hamlin on introspection amid Kyle Busch’s winless skid: ‘It’s not all just luck’