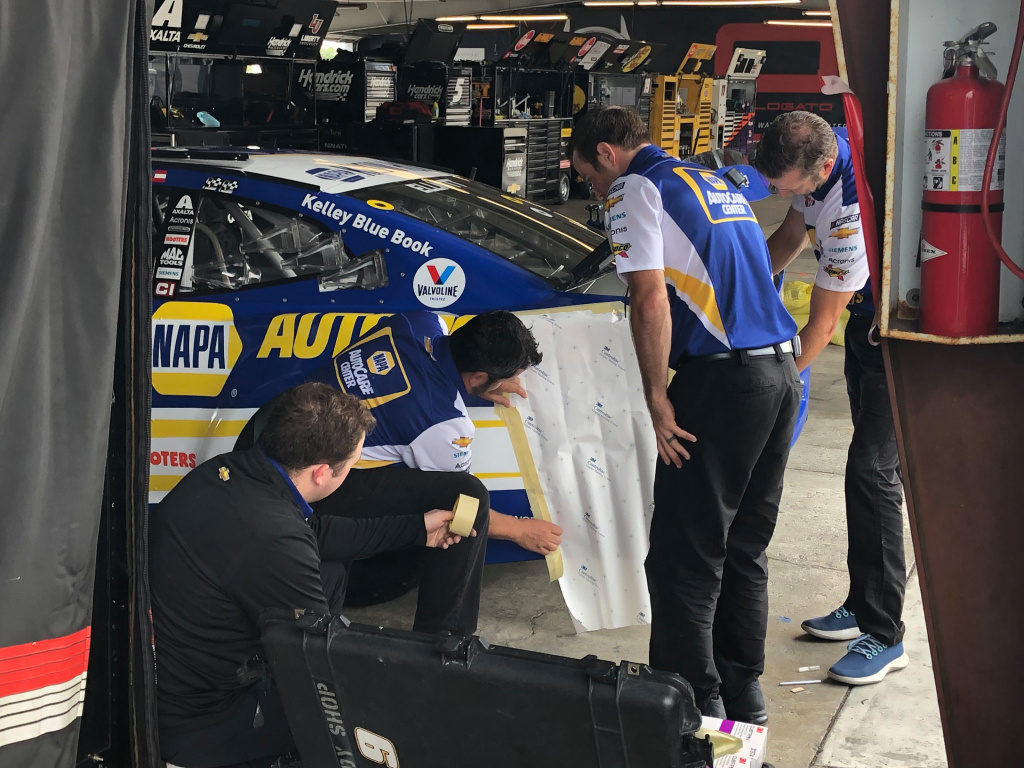 WATKINS GLEN, N.Y. – Chase Elliott, who is seeking to win his third consecutive Cup race at Watkins Glen International, will have to have race without crew chief Alan Gustafson and start from the rear for inspection violations before Sunday’s race at Watkins Glen International.
NASCAR announced that the teams of Elliott and Christopher Bell received L1 penalties and had parts confiscated. NASCAR did not detail what was taken from each car.
Elliott’s team will lose Gustafson for the race and start at the rear of the 37-car field. Engineer Tom Gray will take over for Gustafson. NASCAR also is docking Elliott 10 driver points and the team 10 owner points. NASCAR also is issuing a $25,000 fine.
Bell’s team will lose crew chief Adam Stevens for the race. NASCAR also is docking Bell 10 driver points and the team 10 owner points. NASCAR also is issuing a $25,000 fine. Car chief Chris Sherwood will serve as Bell’s crew chief today.
Both Elliott and Stevens were ejected after their cars passed inspection.
The Cup race begins at 3 p.m. ET on NBCSN.
Chad Knaus, vice president of competition for Hendrick Motorsports, issued a statement:
“Unfortunately today at Watkins Glen, the No. 9 car had an issue at technical inspection. The team has been assessed with an L1 penalty and Alan (Gustafson) has been suspended from the race. Tom Gray, lead engineer of the No. 9, will take over calling the race in Alan’s absence. It’s an unfortunate circumstance for Alan, Chase and the race team. We apologize to our fans and partners associated with the No. 9 team, and will now focus forward on achieving the best possible results in today’s race.”
Elliott was to have started 11th in the 37-car field.
Elliott won at Watkins Glen in 2018 and 2019. There was no race at Watkins Glen last year because of COVID.
He has won six of the last eight Cup road course races. His seven career road course wins rank third in NASCAR history. Elliott’s seven wins have come in 16 career starts on road courses, a 43.75% winning percentage. Elliott won at Road America last month and at Circuit of the Americas in May.

#NASCAR … ⁦@chaseelliott⁩ on the challenge of starting at the rear today after the penalties to the No. 9 team at ⁦@WGI⁩ pic.twitter.com/OMQeRCAcGp
— Dustin Long (@dustinlong) August 8, 2021

#NASCAR … ⁦@CBellRacing⁩ on having to start at the rear today as part of penalties for inspection issues at ⁦@WGI⁩ pic.twitter.com/FPED29F0dO
— Dustin Long (@dustinlong) August 8, 2021