Bubba Wallace and former champion Brad Keselowski were among those who congratulated Kyle Larson after his win in Sunday’s Cup race at Las Vegas Motor Speedway. Larson’s victory came nearly 11 months after Chip Ganassi Racing fired him for using a racial slur during an online racing event. NASCAR suspended him the rest of 2020.… 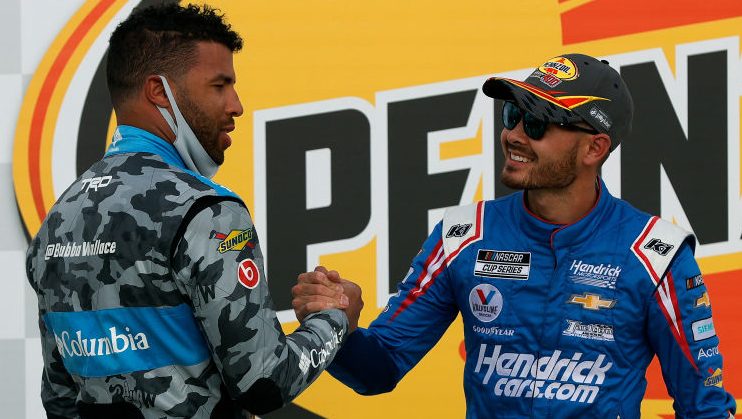 Bubba Wallace and former champion Brad Keselowski were among those who congratulated Kyle Larson after his win in Sunday’s Cup race at Las Vegas Motor Speedway.
Larson’s victory came nearly 11 months after Chip Ganassi Racing fired him for using a racial slur during an online racing event. NASCAR suspended him the rest of 2020. Larson returned this season with Hendrick Motorsports.
Wallace, who said last year that Larson deserved a second chance, went to Victory Lane to congratulate Larson.
“It meant a lot to have Bubba come to Victory Lane,” Larson said. “He always does a really good job of congratulating the winners. Yeah, I saw him waiting to say hi or whatever to me as I ran over there, and just had a quick moment with him. He said congrats. He’s always believed in me. So that was special.
“Just really cool to have him come by and take time out of his post race where he could be on his way to the airport to go home. For him to come over was really cool. I hope they can start getting some better luck with that race team, having some good runs like they deserve.”
Wallace was among the first people Larson reached out to last year after uttering the slur.
“There is no place for that word in this world,” Wallace said last April. “I am not mad at him, and I believe that he, along with most people, deserve second chances and deserve space to improve.”
Larson used his time away from NASCAR last year to do that, writing last October:
“Since April, I’ve done a lot of reflecting. I realized how little I really knew about the African-American experience in this country and racism in general. Educating myself is something I should’ve done a long time ago, because it would’ve made me a better person – the kind of person who doesn’t casually throw around an awful, racist word. The kind who makes an effort to understand the hate and oppression it symbolizes and the depth of pain it has caused Black people throughout history and still to this day. It was past time for me to shut up, listen and learn.”
Runner-up Brad Keselowski went out to the track to congratulate Larson after Sunday’s race.
“I think everybody loves a good redemption story,” Keselowski said. “He’s fought really hard for his opportunity to come back and (is) making the most of it. I’m happy for him. I think I told him that, just happy for him.
“I wanted to win. I told him I wanted to win the damn race. But if I couldn’t, I’m glad he did. We’ve all been kind of pulling for him.”
Said Larson on what Keselowski did: “That was really special to see Brad walking across the infield to come congratulate me, then waiting while I completed my interviews and things. So, yeah, that was special.
“He’s somebody that I really respect and look up to as a driver, a leader, all of that. I definitely feel like we built a friendship over the last, really, probably, five or six years. Having children has really brought us together more so.
“We live in the same community, so we see each other throughout the week sometimes. Birthday parties and stuff they’ll come to for my children. I really like Brad. I’ve always respected him. Even before I ever raced in NASCAR, I was a Brad Keselowski fan.”
Among those offering Larson congratulations on social media were Mario Andretti and Bill Lester.


Congrats @KyleLarsonRacin. You got your second chance and absolutely made the most of it! Your talent was never in question, only one of your decisions. #NASCAR
— Bill Lester (@Bill_Lester) March 7, 2021

Today @LVMotorSpeedway was probably the most entertaining @NASCAR race I ever watched as Kyle @KyleLarsonRacin drove the race of his life for his first Cup Win. O’l Rick knew what he was doing when he hired him. #RACER
— Mario Andretti (@MarioAndretti) March 7, 2021

Proud and happy for @KyleLarsonRacin
Told him way to keep his head thru it all! We all knew it was a matter of time..
Nice dub young money🤘🏾 https://t.co/7vRGpDEl3H
— Bubba Wallace (@BubbaWallace) March 8, 2021