AJ Allmendinger wins in the rain at Charlotte Roval

AJ Allmendinger avoided spinning cars and dodgy conditions in the rain to win Saturday’s Xfinity playoff race in overtime at the Charlotte Motor Speedway Roval. “Oh my God, I don’t know what to say,” Allmendinger said on his radio to his Kaulig Racing team. The victory is Allmendinger’s fifth of his Xfinity career and second… 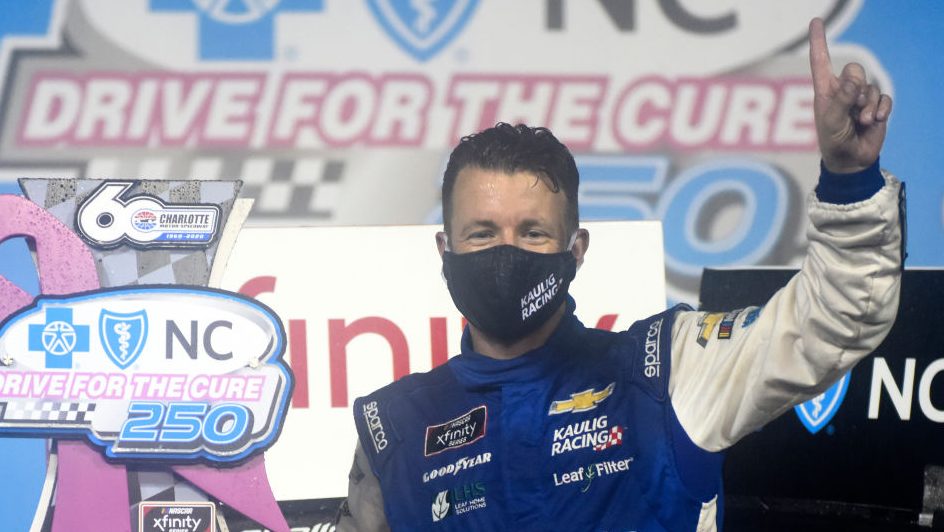 AJ Allmendinger avoided spinning cars and dodgy conditions in the rain to win Saturday’s Xfinity playoff race in overtime at the Charlotte Motor Speedway Roval.
“Oh my God, I don’t know what to say,” Allmendinger said on his radio to his Kaulig Racing team.
The victory is Allmendinger’s fifth of his Xfinity career and second this season. Allmendinger took the lead from Chase Briscoe when Briscoe spun before Turn 2 on the infield portion of track on the final restart.
“The driver just made a mistake,” Briscoe said. “In the conditions like this you’ve got to be at 100 percent and I tried going 110 and it bit me, so very unfortunate. That one is gonna sting for a long time.”
Noah Gragson finished second. He was followed by Daniel Hemric, Alex Labbe and Ross Chastain.
Harrison Burton, Brandon Brown, Riley Herbst and Michael Annett entered the race outside a transfer spot. All four were eliminated from title contention.
Rain was a factor nearly the entire race. Rain began falling within 10 minutes of the start of the event.

The race was stopped for more than 35 minutes after 30 laps in the 68-lap race because of rain and puddles on track.
Rain created havoc for many drivers, including some playoff contenders.
Riley Herbst makes contact with Noah Gragson in Saturday’s Xfinity race. (Photo by Jared C. Tilton/Getty Images)
Harrison Burton was running second going into the final chicane on the last lap of stage 1 but missed the chicane and had to serve a stop-and-go penalty. The incident kept him from finishing in the top 10 and collecting any stage points. Burton later stopped on track and finished 33rd, failing to advance.
Twelve of the first 30 laps were run under caution. That included Riley Herbst making contact with Gragson as they raced for the lead.
Asked about the contact that sent him into a barrier, Gragson told NBC Sports: “I don’t get really mad, I get even.”
Gragson made contact with Herbst early in the Texas race in July. That contact sent Herbst into the wall.

STAGE 1 WINNER: Kaz Grala
STAGE 2 WINNER: Chase Briscoe
WHO HAD A GOOD RACE: Runner-up Noah Gragson has finished in the top 10 in all eight career Xfinity road course starts. … Daniel Hemric finished third. He has finished in the top five in each of his last three starts. … Alex Labbe’s fourth-place finish is his best in 75 career Xfinity starts. … Cody Ware finished seventh for his first career top 10.
WHO HAD A BAD RACE: Harrison Burton finished 33rd and failed to advance after mechanical issues. … Brandon Brown was running in the top 10 when he went off course in the final laps and failed to finish. He placed 26th.
NOTABLE: Twenty-four of the 68 laps (35.3%) were run under caution because of rain and accidents.
NEXT: The seres opens the Round of 8 at 7 p.m. ET on Oct. 17 at Kansas Speedway on NBCSN


[email protected] is still in his car underneath the cover.
He was asked about his run-in with Noah Gragson. #NASCARPlayoffs pic.twitter.com/QbHjrMaOSW
— #NASCARPlayoffs on NBC (@NASCARonNBC) October 10, 2020

“I don’t really get mad. I get even.”@NoahGragson addresses his incident with Riley Herbst. #NASCARPlayoffs pic.twitter.com/SlxGIxIqNy
— #NASCARPlayoffs on NBC (@NASCARonNBC) October 10, 2020

Alex Bowman turns iRacing laps around the Charlotte Roval | NASCAR
What time and channel is the NASCAR Cup race at Charlotte today?